We at Audley are delighted to announce that, at the end of the month, we’ll once again offer trips to Turkey. You might already know about its Greco-Roman history, its delectable cuisine and Mediterranean coastline. But, it’s also full of surprises. Here are just some of the findings from our recent research trips.

1. Turkey was one of the earliest wine-producing areas and is the fourth largest producer of grapes in the world.

Turkey doesn’t often spring to mind when thinking of the great wine-producing countries, but vineyards are a common sight as you drive from place to place thanks to the country’s fertile soil and climate. The wines produced are a highlight of visiting the country and they really complement the excellent cuisine. 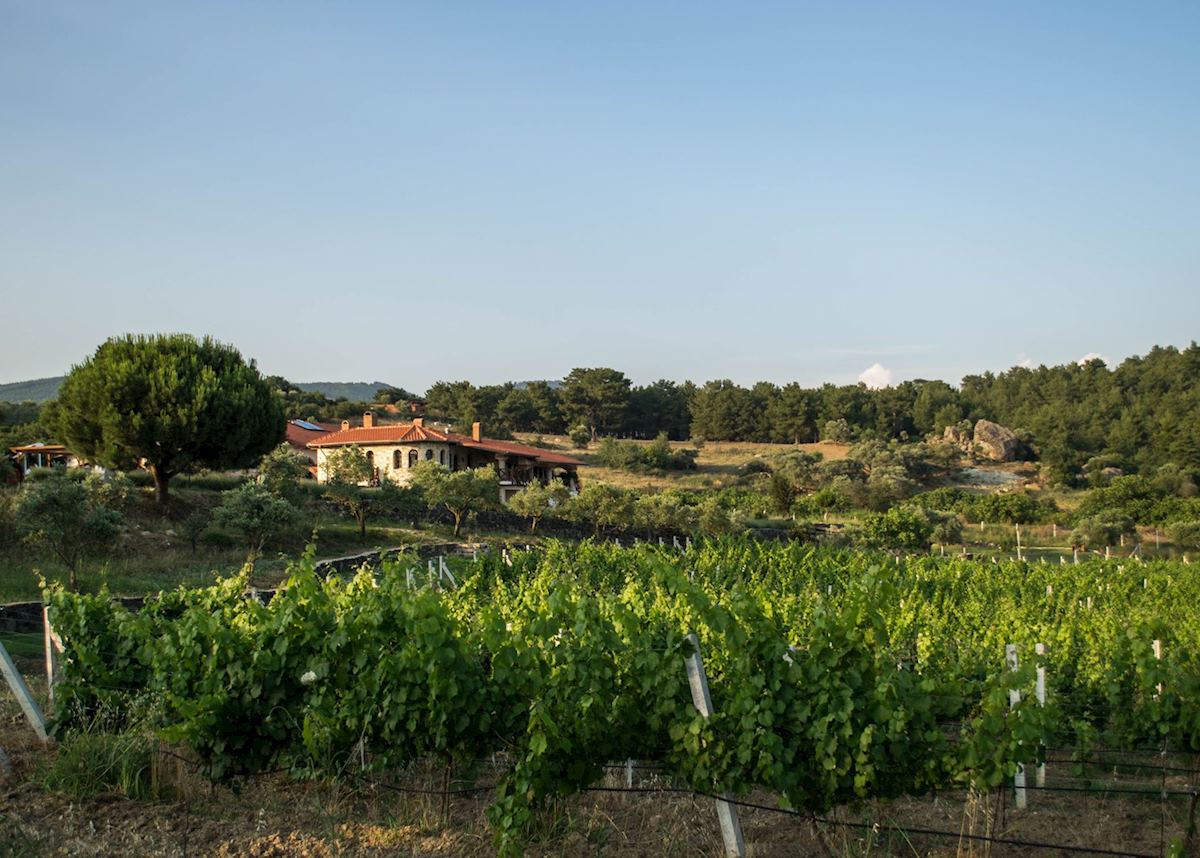 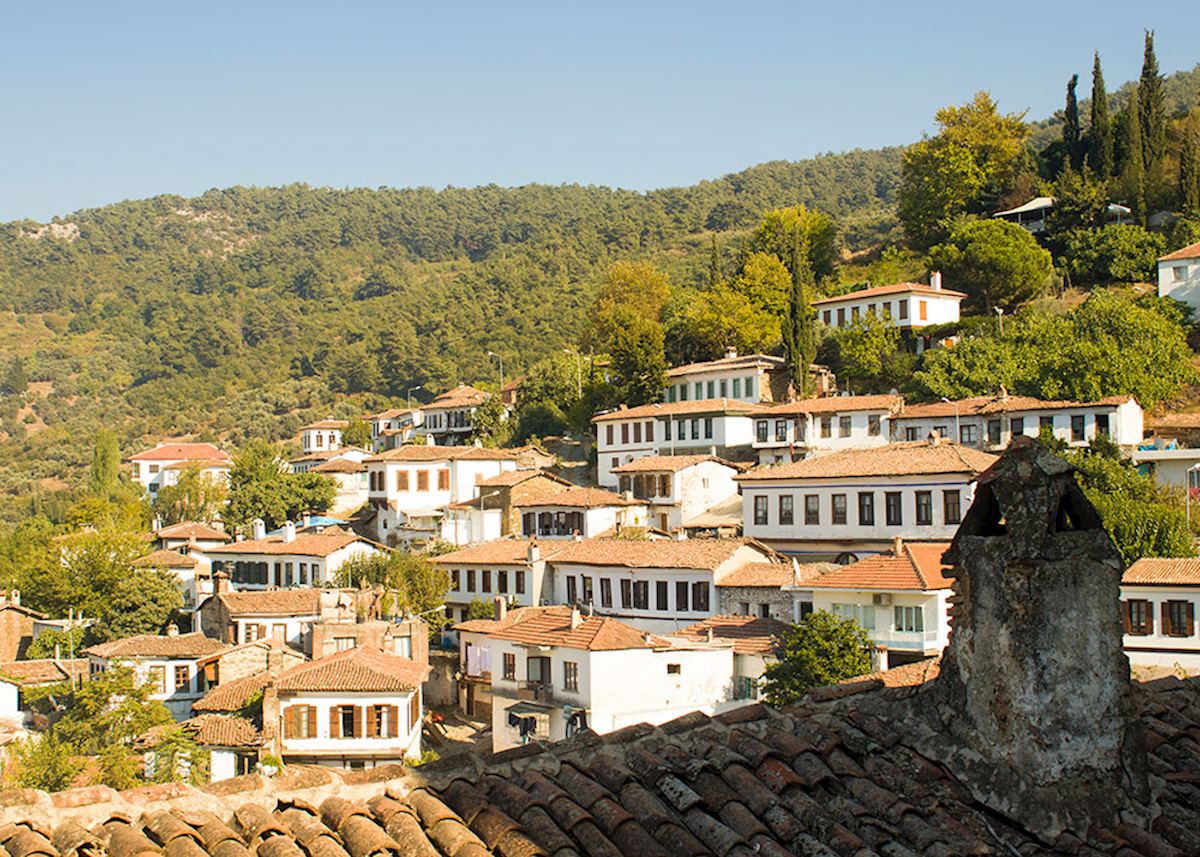 It’s possible to visit a few of these vineyards as you travel through Turkey: on my way to Ephesus on a recent trip, I enjoyed a wine-tasting session and a tour of Urla Winery, near Izmir. I loved a red called Urla Karasi, which is unique to the vineyard. If you’re there during harvest time you even have the opportunity to help harvest the grapes.

The next night I stayed in a stone mansion in Şirince, an Ottoman-era hillside village, and enjoyed another local red (Boğazkere) while watching the sun set over the surrounding vineyards from the hotel’s terrace.

2. The Whirling Dervishes, whose ancient order originates in Konya, whirl as an act of devotion to God.

Konya itself has an ancient history, dating back to around 4,000 BC, although it’s primarily known as the home of the Order of the Whirling Dervishes. It was here that the poet, scholar and Sufi mystic Rumi lived for much of his life, teaching tolerance, spiritual evolution and connection with the divine through music and dance. 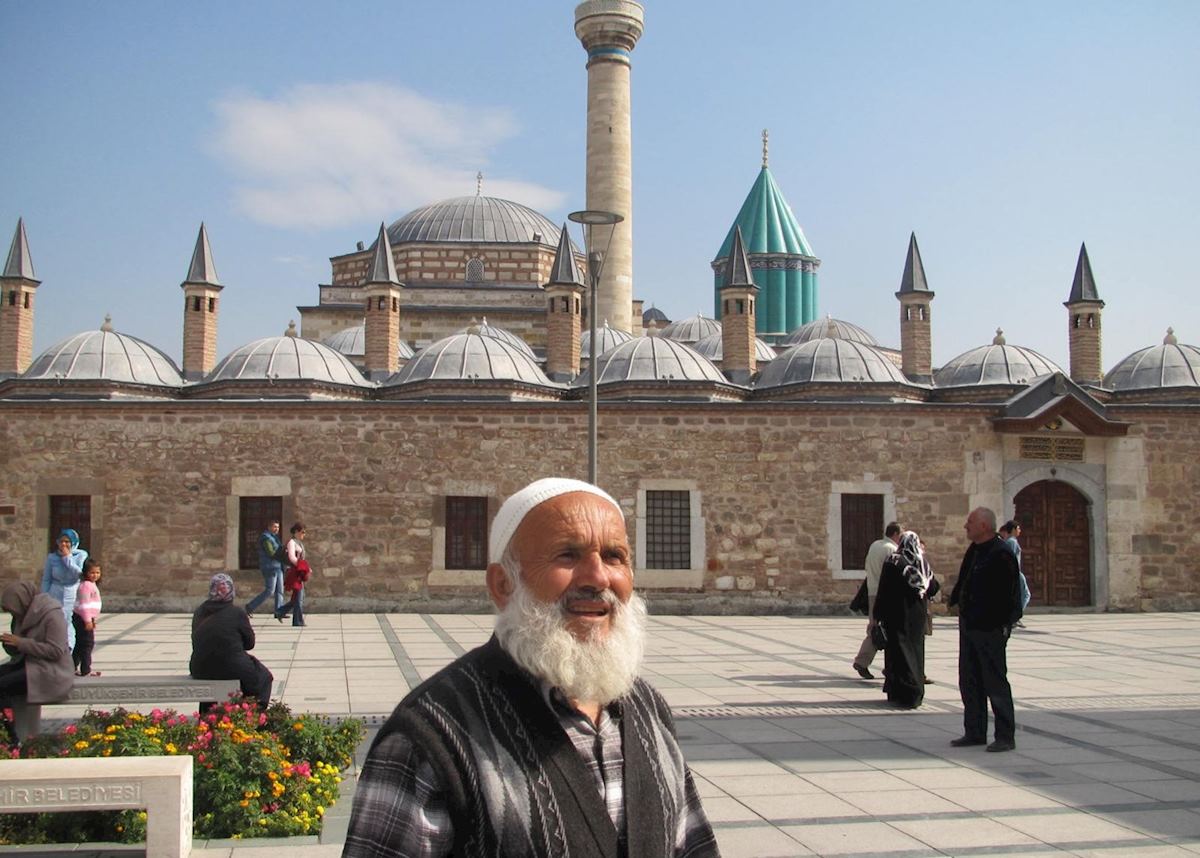 Upon his death, Rumi’s followers founded the Mevlevi Sufi Order, more commonly known as the Whirling Dervishes because of their mesmeric, twirling ceremonial dance that depicts the progress of spiritual evolution. The Mevlana Museum in Konya examines the lives and philosophy of the dervishes. It’s a busy destination throughout the year, a testament to how important the dervishes remain even today.

3. Istanbul is the only city in the world which straddles two continents: Europe and Asia.

Istanbul is divided not just between the European and Asian sides, which are separated by a stretch of water called the Bosphorus, but also by an inlet called the Golden Horn, which splits the European side of the city in two.

Istanbul's many districts each have their own distinct character and atmosphere. The majority of the city’s best-known sites are found in and around Sultanahmet (the Old City). Nişantaşi is known for its high-end designer stores and plethora of great cafes and restaurants, while Balat and Fener are typified by their ramshackle, bright old houses and dilapidated cafes on steep, cobbled streets overlooking the Golden Horn. 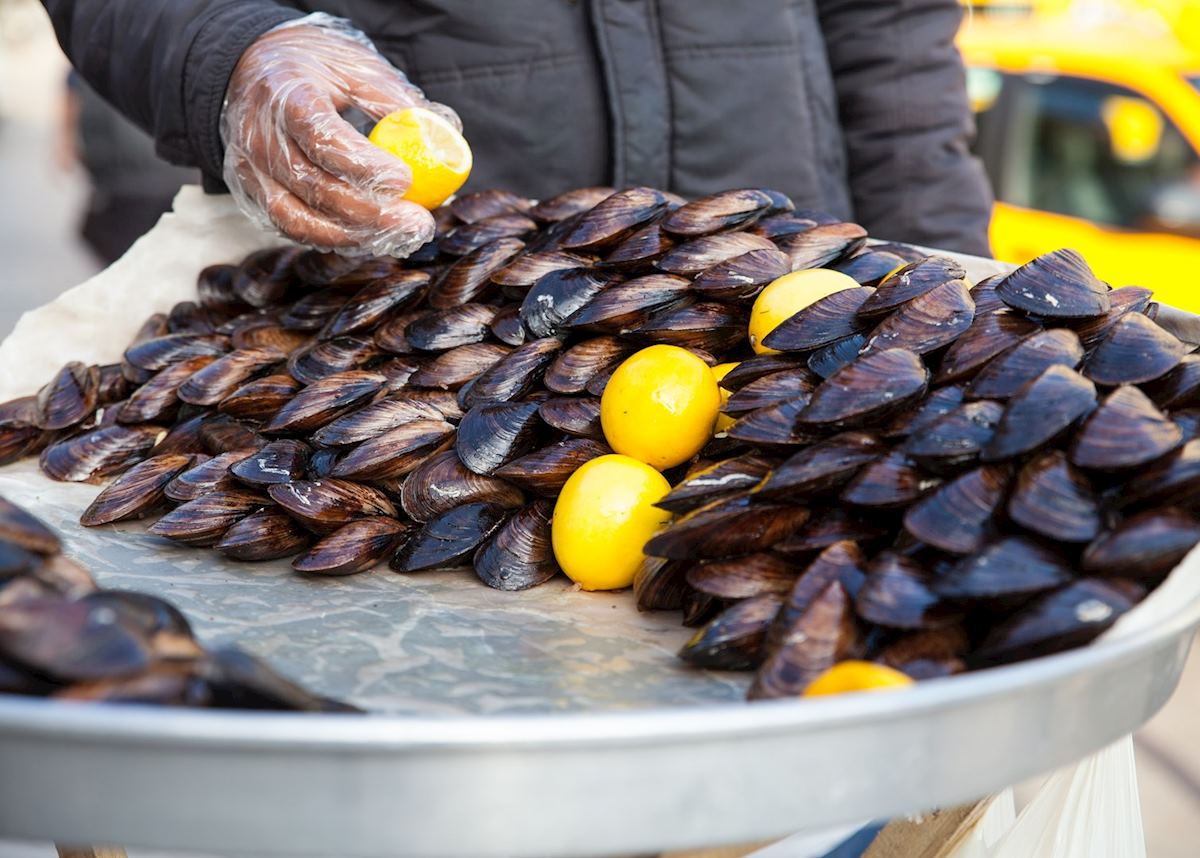 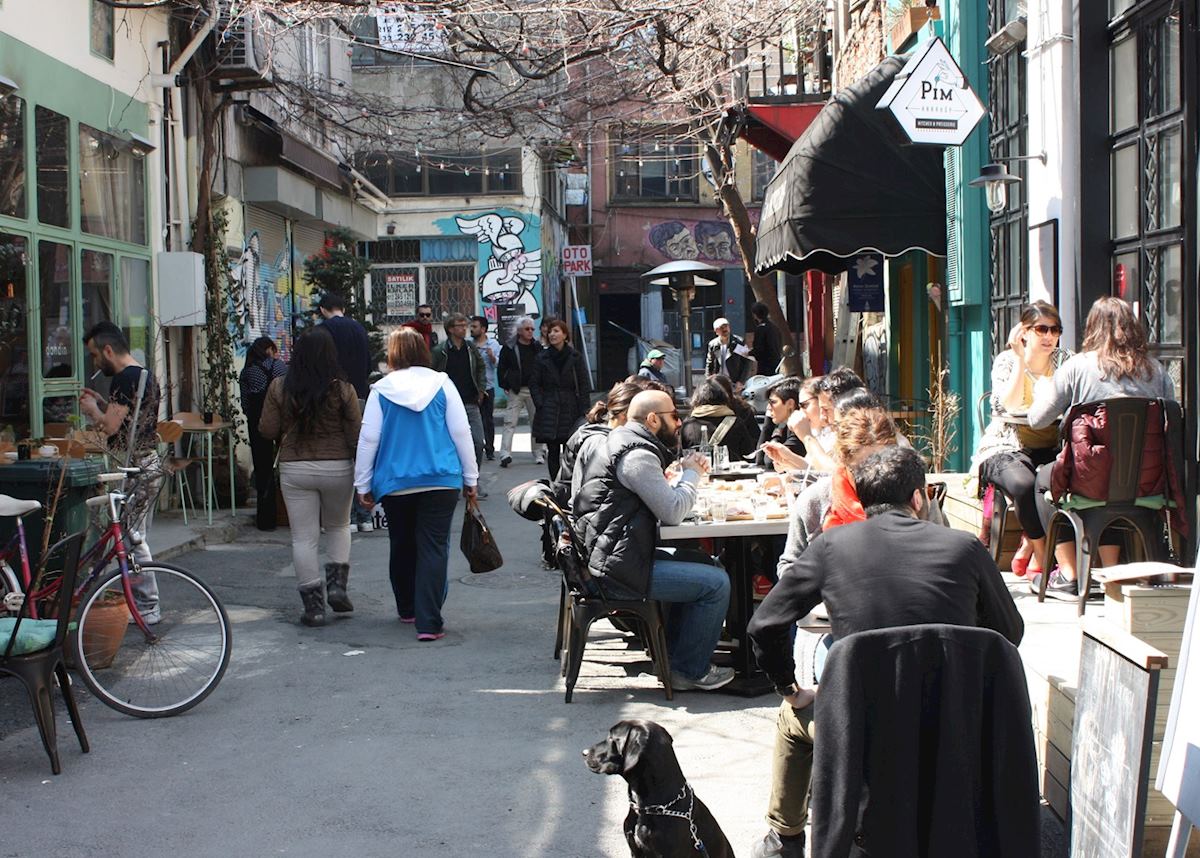 I also loved exploring Karaköy, which stretches from the Galata Bridge. Here you can find local street food dishes like mussels and bread served on the waterfront, and a labyrinthine area of narrow alleyways brimming with tiny coffeehouses.

4. The Turks introduced tulips to the Netherlands, as well as cherries and coffee to Europe.

Tulips actually originated in Turkey. To commemorate this, the government plants thousands of bulbs every year throughout Istanbul. They bloom during late March to April, adding bright splashes to the city.

Turkey is largely self-sufficient with regards to its food, exporting more produce than it imports and placing huge importance on locally produced ingredients. Blending Mediterranean, Middle Eastern, Balkan and Central Asian cuisines, the result is delicious, particularly the plentiful vegetable meze dishes. These are often made with garlic, nuts and spices, which are served with fresh bread, locally produced olive oil and, if it’s in season, pomegranate syrup. Fish is often served on the coast, where it’s freshest, and marinated seafood is a signature dish. 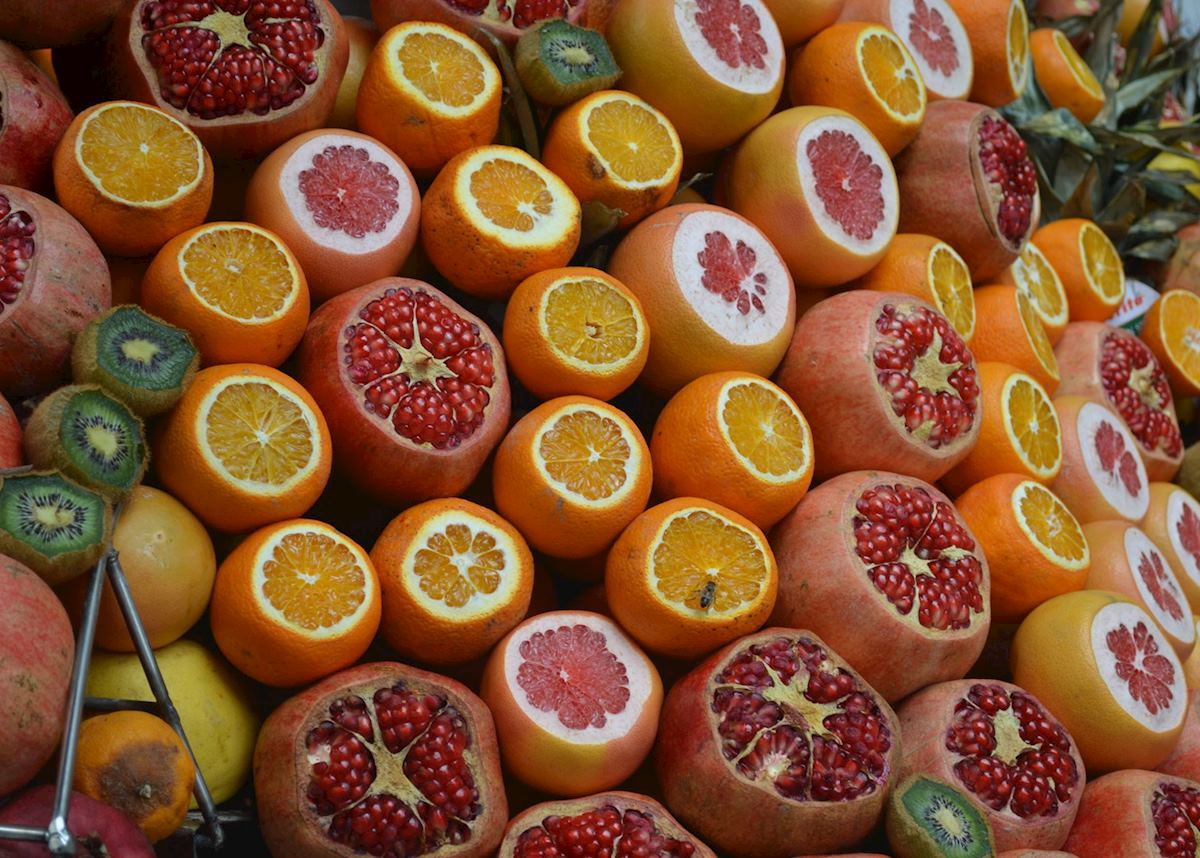 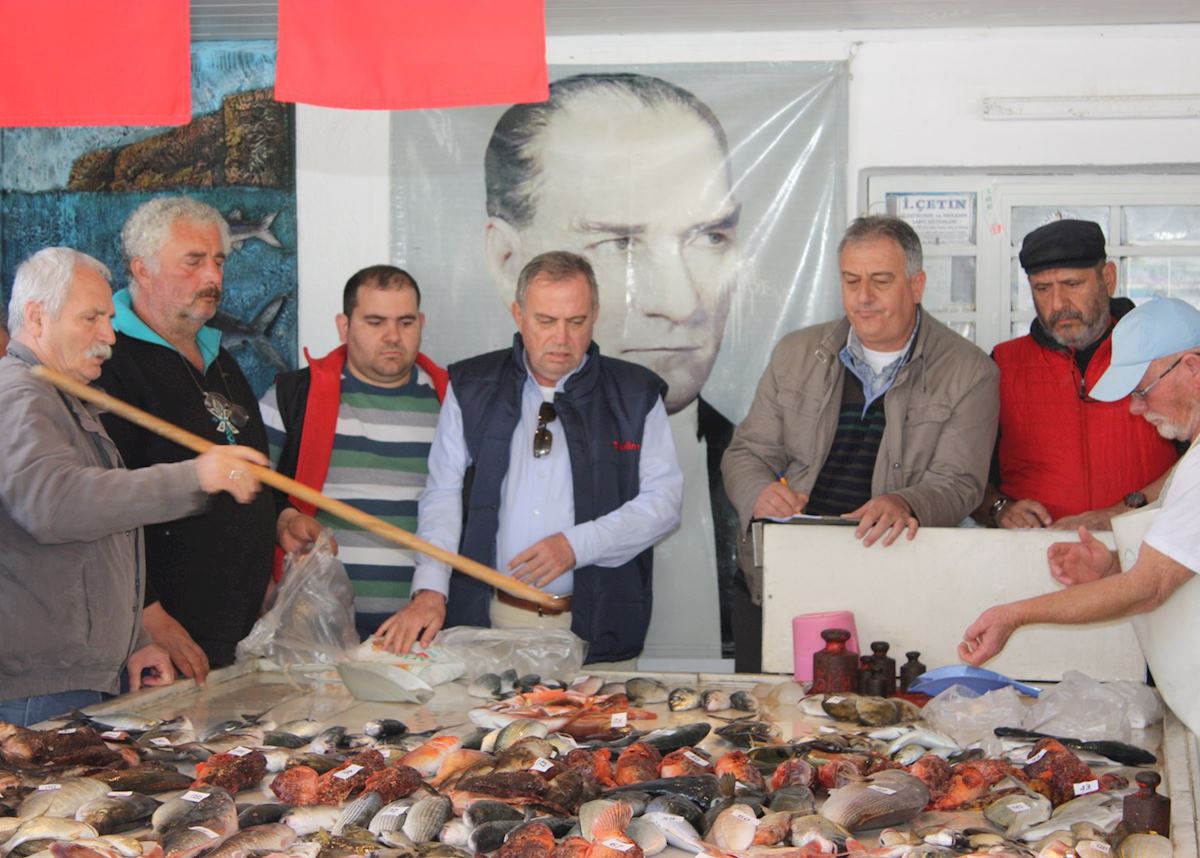 I like borek, a flaky pastry parcel filled with anything from minced lamb to spinach, garlic and cheese, and served with yogurt, a staple throughout Turkish cuisine. I also love the variety of fruit that’s found everywhere, especially the fresh juice which can be bought from street stalls and juiced right in front of you.

5. Design is prized in Turkey, which is reflected in the country’s range of exceptional boutique properties.

Turkey seems to have more than its fair share of boutique hotels that brim with character, with locations as intriguing as the properties themselves. In Turkey, you can stay on a vineyard, sleep in a mansion surrounded by olive groves and orchards, or even spend a few days in a cave hotel, carved into the rock itself.

The Alavya in Alaçati is comprised of six traditional stone houses set around a flower-filled garden where you’ll find hidden lounging areas, a swimming pool and lanterns hanging from the fruit trees. Each room is different; mine had handmade throws and cushions to soften the stone walls and floor, and homemade sweet treats to keep me going until dinner. 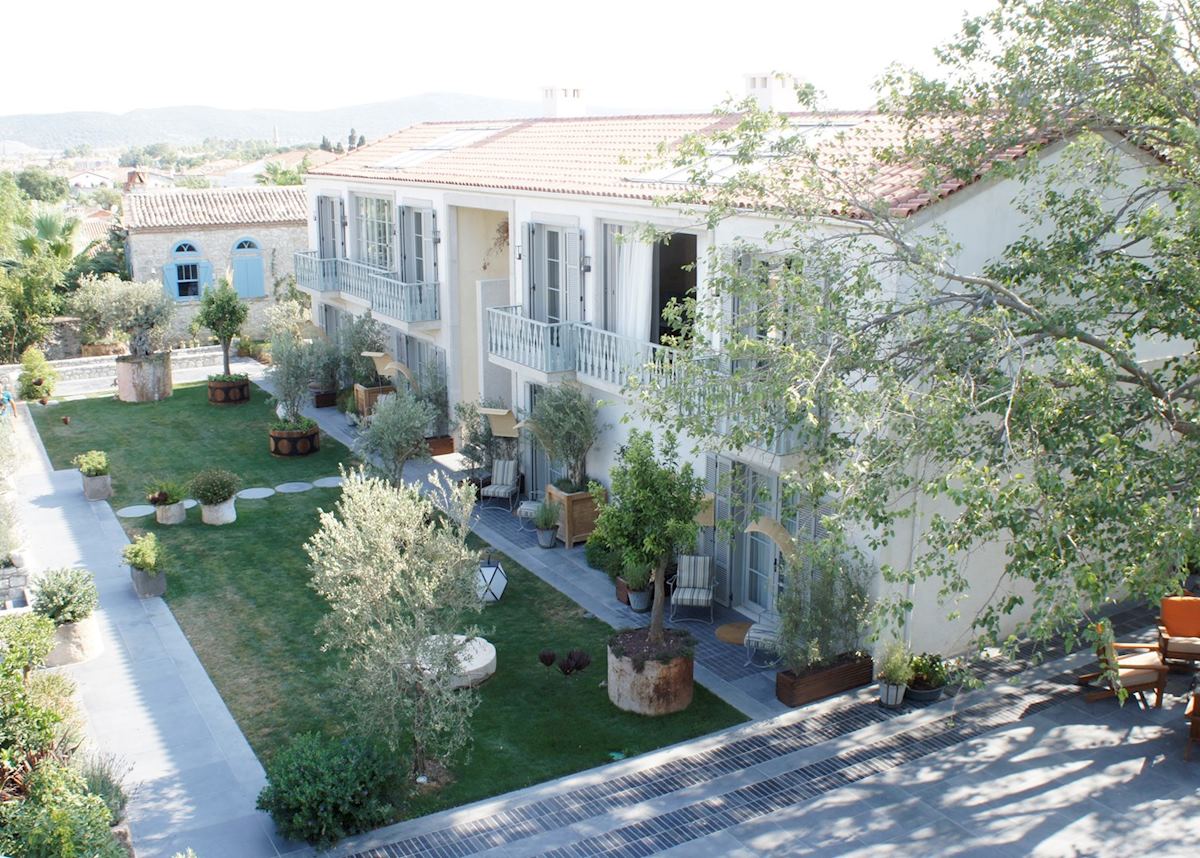 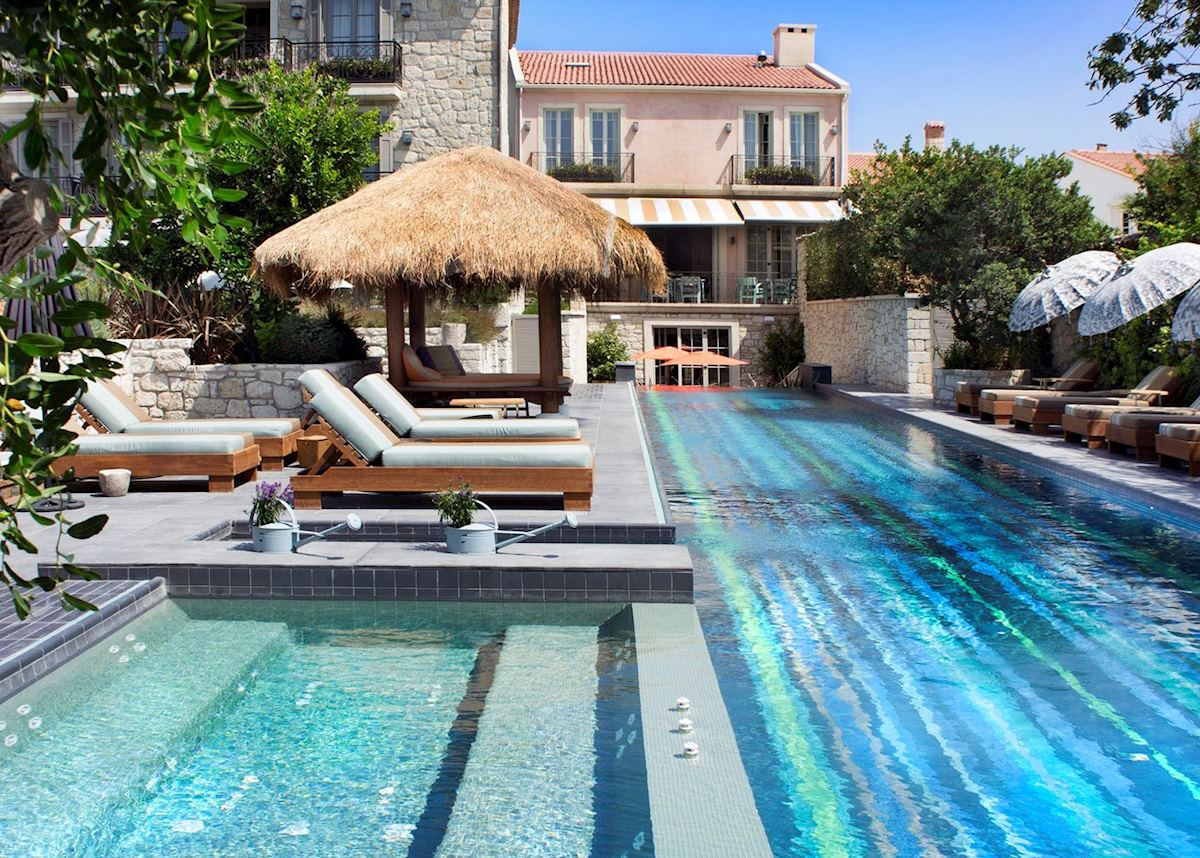 Pool at the Alavya Hotel

6. Turkey once had two of the Seven Wonders of the Ancient World: the Temple of Artemis in Ephesus and the Mausoleum of Halicarnassus in modern-day Bodrum.

Perhaps the best-preserved, most complete classical city in the Mediterranean, Ephesus is a huge site with an enormous history. Dating back as far as the 10th century BC, the city came into prominence when it was made capital of Roman Asia Minor in the 1st century AD, second in size and distinction only to Rome.

During this period the city earned a reputation for opulence and birthed several exquisite buildings, including the Library of Celsus and the Temple of Artemis, which was the biggest temple to the goddess in the world. Walking around the site today can still make an impact on the first-time visitor, particularly as you reach the top of the Curetes Way and get your first glimpse of the colossal library. 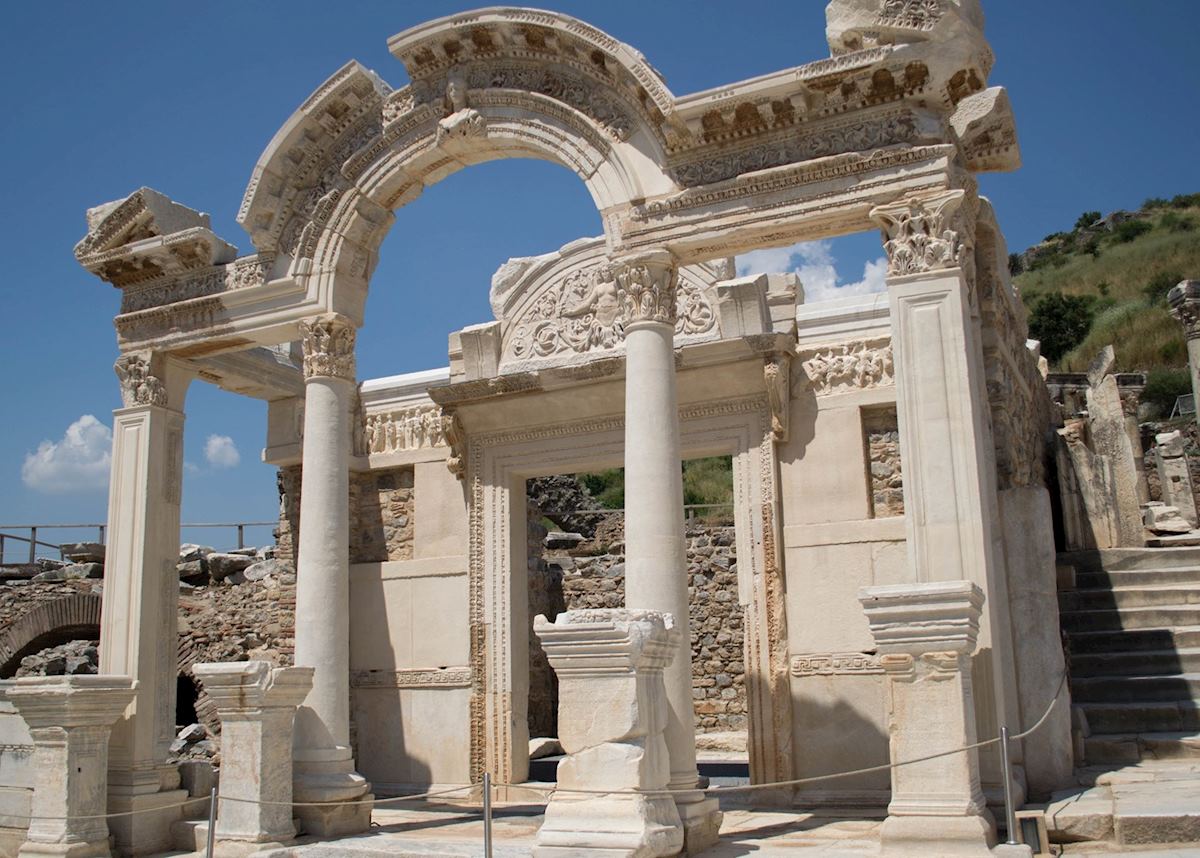 7. Saint Nicholas, also known as Santa Claus, was born in Patara and became the bishop of nearby Demre, on Turkey’s Mediterranean Coast.

Saint Nicholas’ Church in Demre is small, but has some well-preserved frescoes and is known for being the burial place of Saint Nicholas himself. He served as bishop in an older church.

It’s a significant piece of Byzantine architecture. Today, most visitors are Eastern Orthodox Christians for whom Saint Nicholas is an important religious figure in his position as patron saint of children. It’s not uncommon to come across Russians weeping with the emotion of visiting his tomb.

Nearby are the Lycian rock tombs of Myra, carved into a rock face that now overlooks agricultural fields, as well as an ancient theatre. Both Myra and Saint Nicholas’ Church can be visited from Antalya, Çirali, Kaş or Kalkan, all located on the south coast either side of Demre. 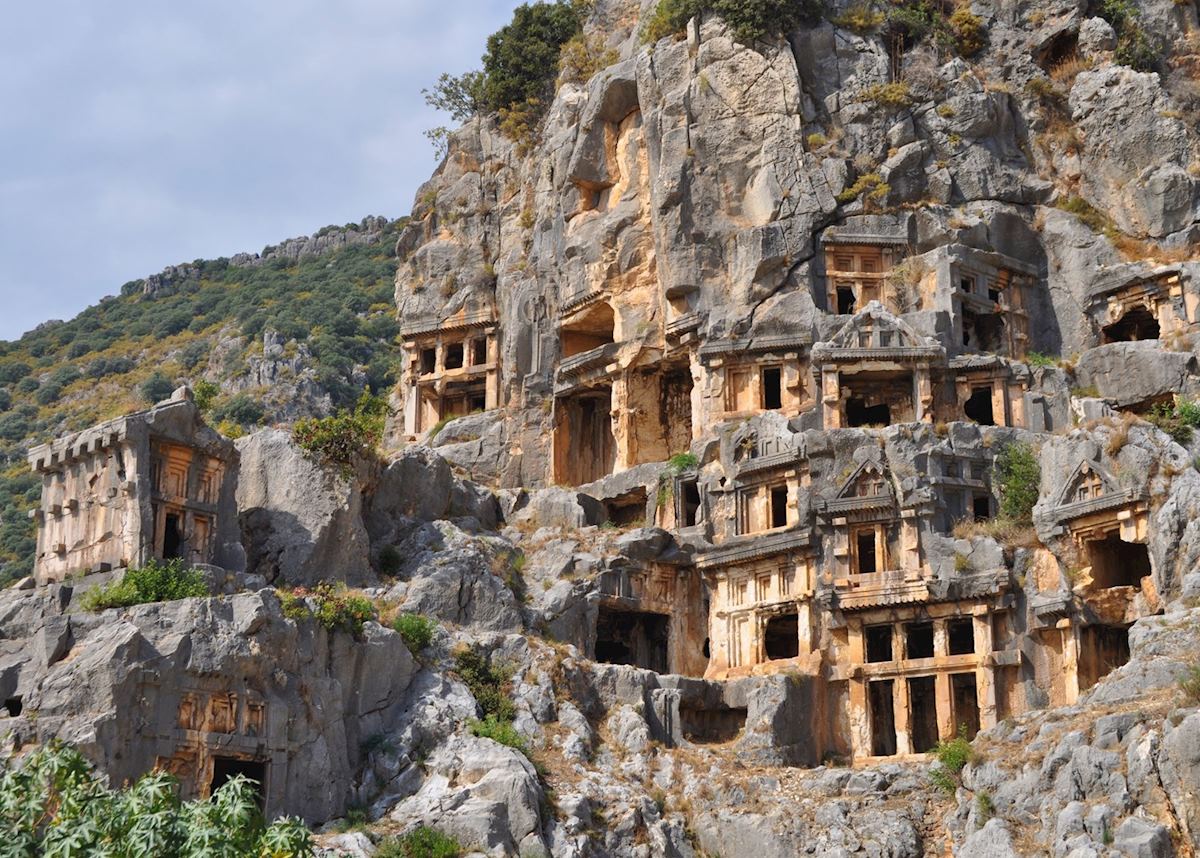 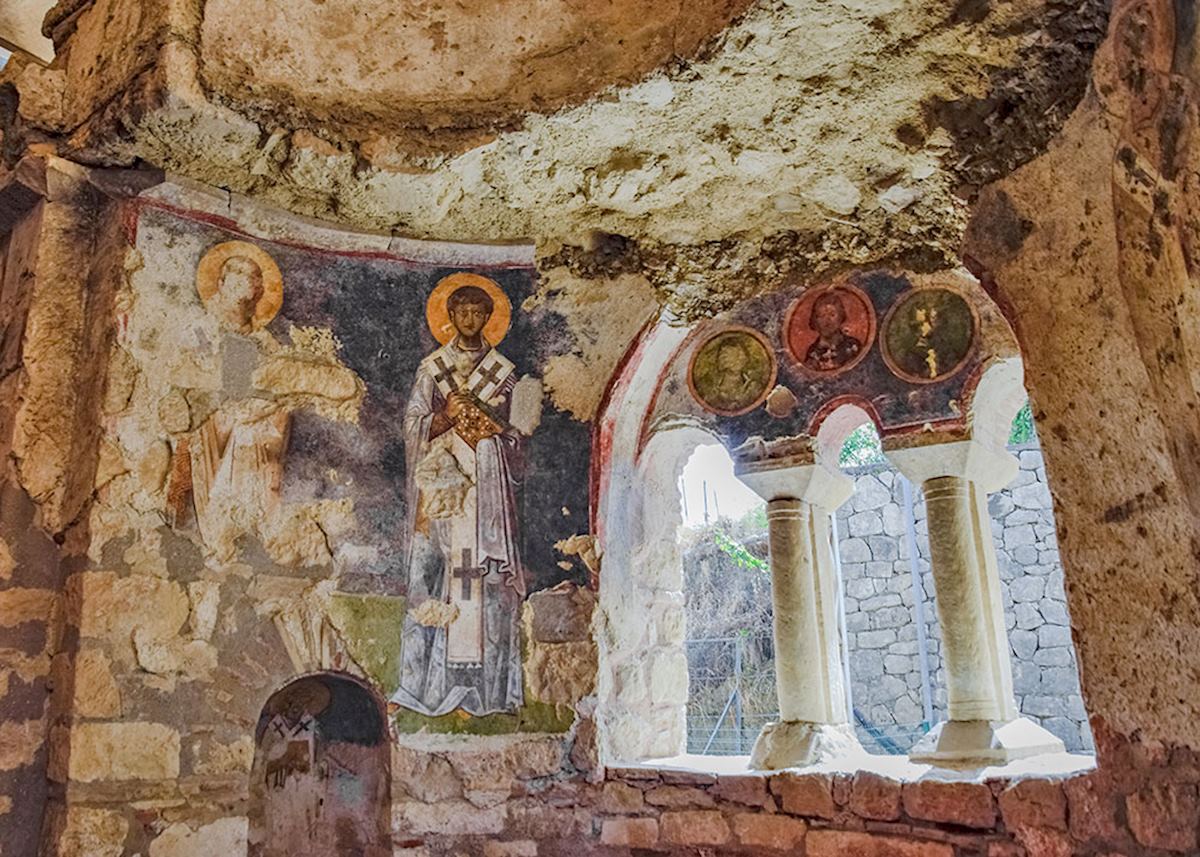 Church of St.Nicholas in Demre

It’s hard to pick out the best mosque in Istanbul. There are so many to choose from, each with different merits: the interior of the Blue Mosque has a beguiling beauty, while the silhouette of the Suleymaniye Mosque helps define the Istanbul skyline. The architect Mimar Sinan has contributed a huge amount to Turkey as a whole, and Istanbul in particular, and the buildings he designed stand out as among the most exceptional in the city.

Although his best-known works are the Suleymaniye and Şehzade mosques, I think I prefer the Little Hagia Sophia Mosque. Formerly a Greek Eastern Orthodox church known as the Church of the Saints Sergius and Bacchus, it’s one of the most important Byzantine buildings in Istanbul. The building has a scenic location overlooking the Marmara Sea, and was converted into a mosque in the early 16th century. Although it’s thought to have been constructed as a model for Hagia Sophia, the irregularly octagonal layout is distinct from its better-known counterpart. Little Hagia Sophia is often overlooked by visitors, which provides a great opportunity to admire the early Byzantine architecture without the crowds. 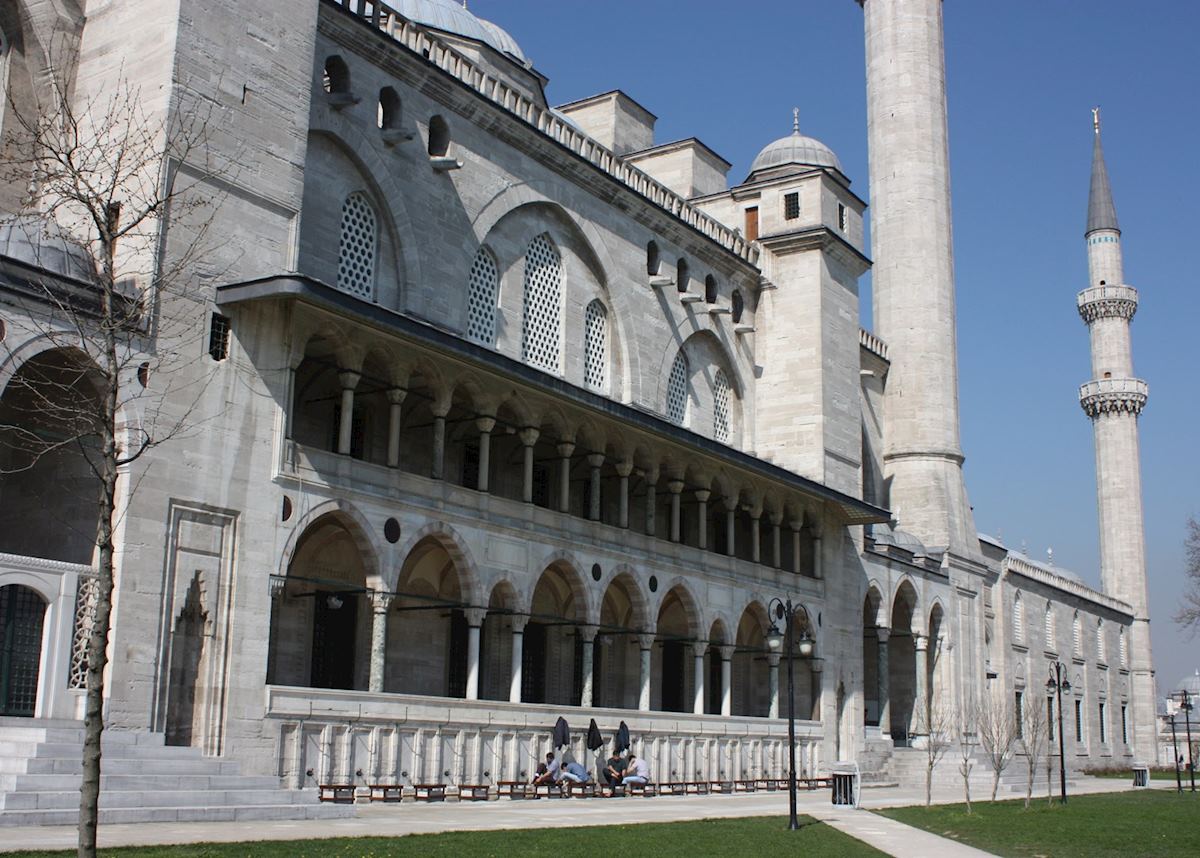 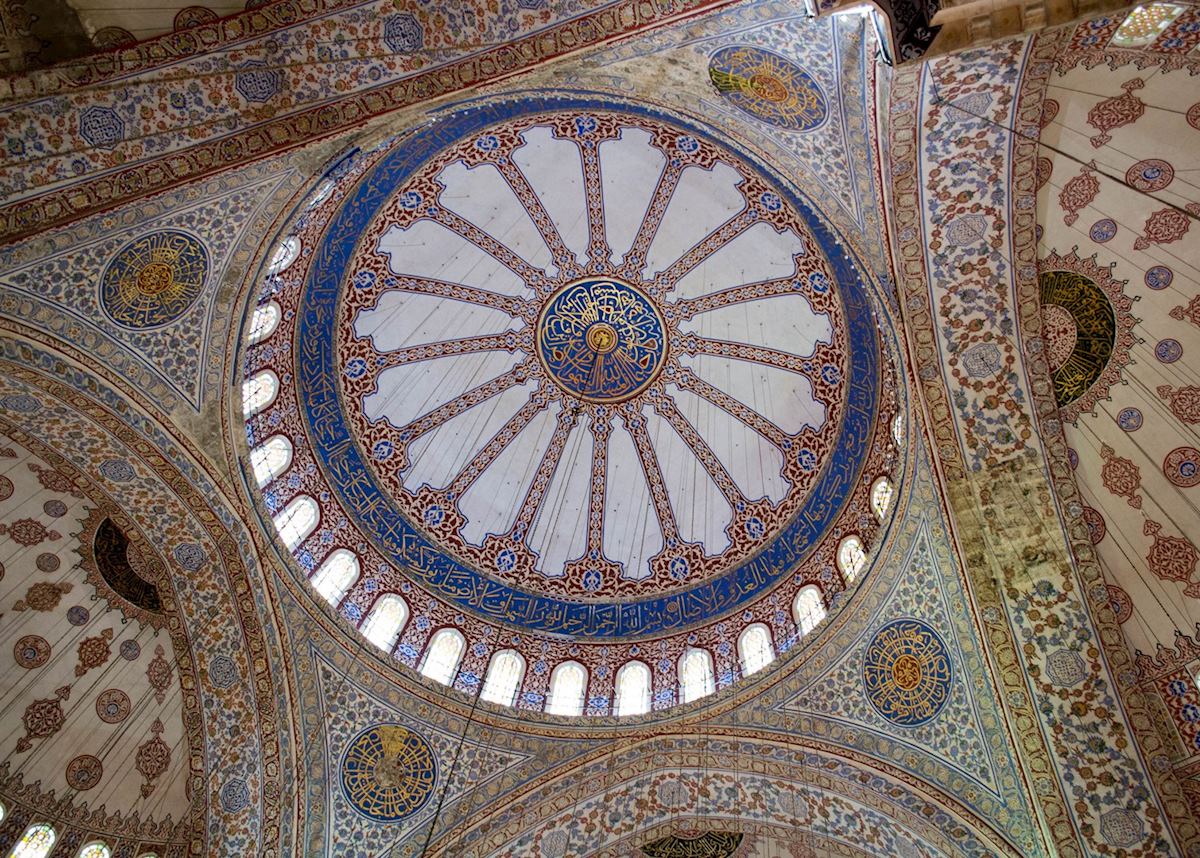 Before Christianity became an accepted religion in the area, Cappadocia was used as a hiding place by Christian populations, who secreted themselves in underground cities excavated from the soft rock. You can still visit these today, along with many examples of early churches carved into the rocks and fairy chimneys, many with well-preserved religious murals painted on the walls.

The Göreme Open Air Museum has excellent examples of these churches, and you can explore inside the fairy chimneys to see the murals. Nearby, you’ll find panoramic viewpoints where you can see some of the region’s most fantastical formations. 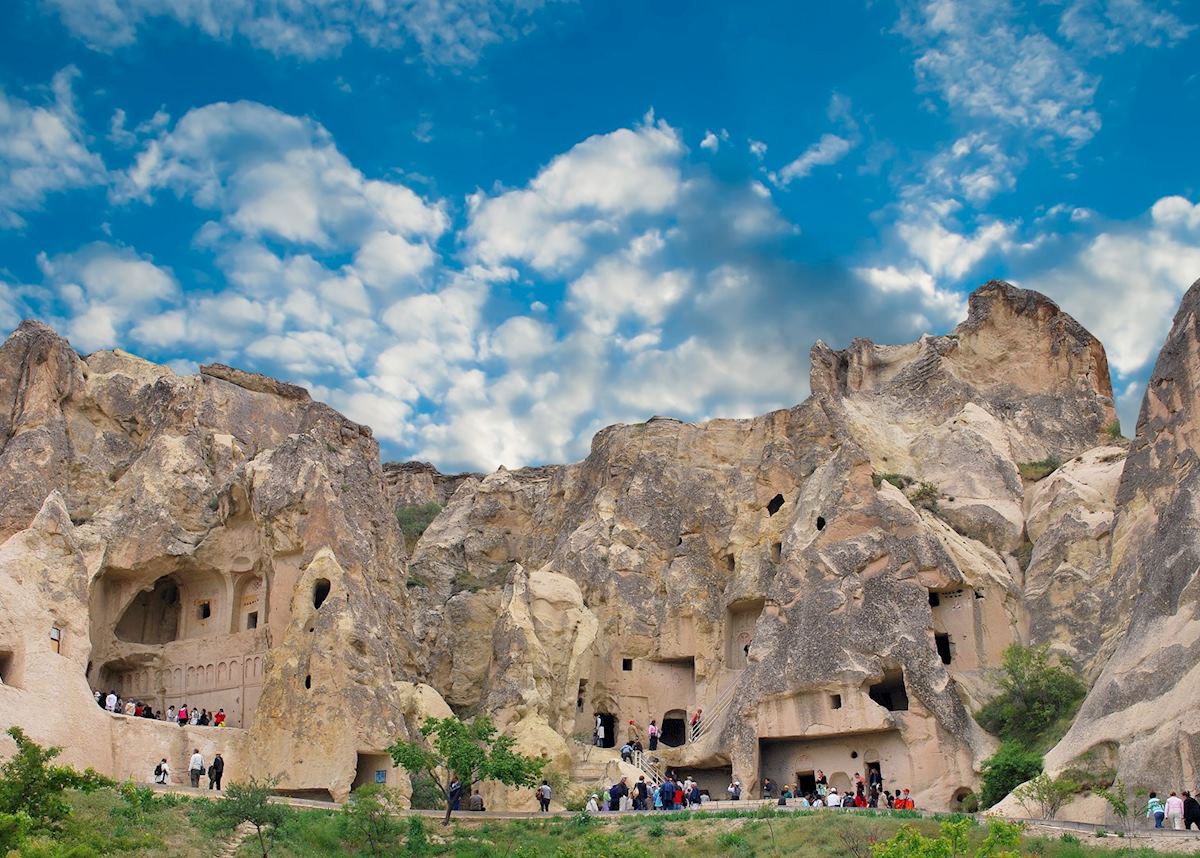 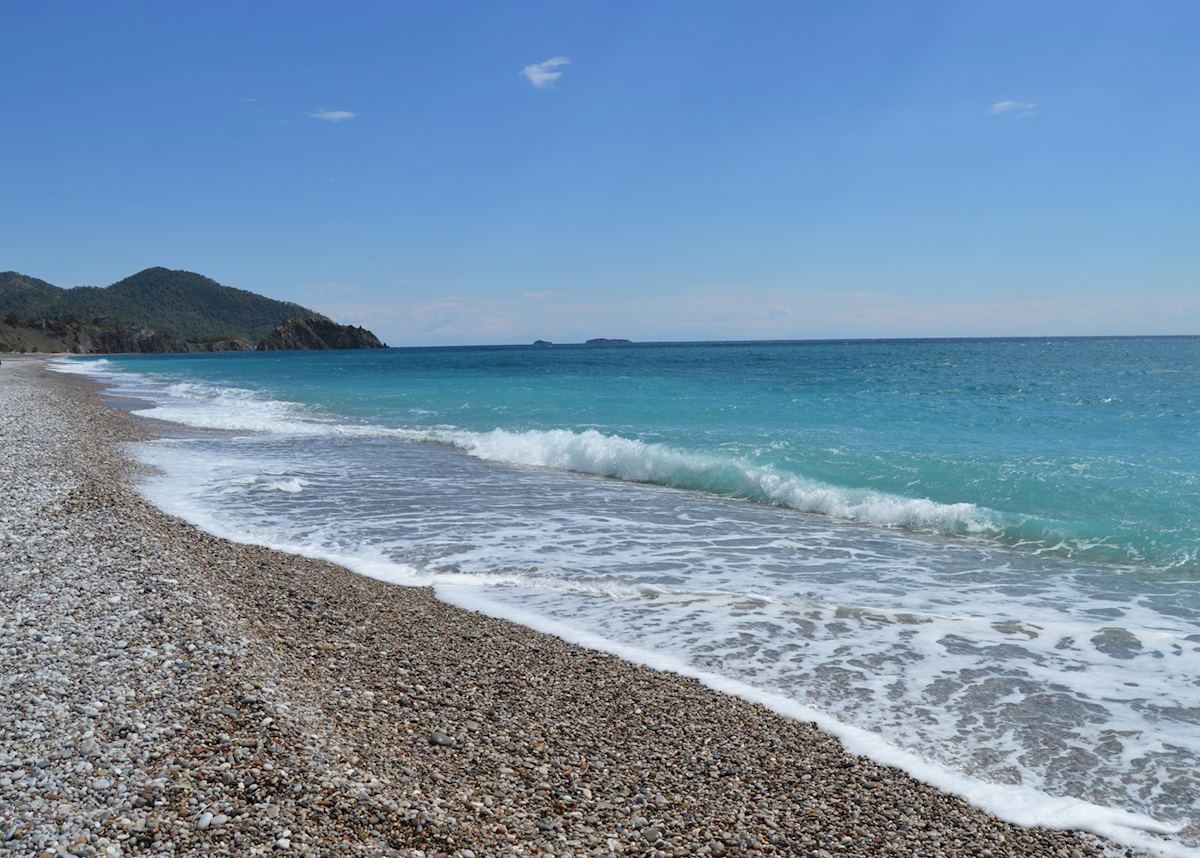 10. The ancient Lycians, who lived on what is now the Turquoise Coast, were a matrilineal people whose language has still not been entirely deciphered.

Lycian remains such as the rock tombs at Myra can be found all along the Turquoise Coast, and a long-distance walking trail called the Lycian Way passes many of these ancient sites on its way between Ölüdeniz and Antalya.

However, most people come to the Turquoise Coast for its bright blue-green water, Mediterranean climate and beach-dotted coastline. Good bases for exploring the coast include the fishing towns of Kalkan and Kaş, and the hidden beach-side forest village of Çirali.

Composed of only a few dirt tracks in a wooded valley that stretches onto a long sand-and-pebble beach, Çirali is a restful retreat where you can get away from everything. Relax in the gardens of your hotel overlooked by the Olympos Mountains, stroll along the beach to the nearby eternal Mount Chimaera to see the enterally burning flames that flicker from cracks in the stone or take a boat trip to a hidden lagoon.

Best time to visit Turkey
Get in touch