A vast archaeological site dating back to 6000 BC, Ephesus was one of the most important cities of the ancient Mediterranean. It is known as the location of the Temple of Artemis, one of the Seven Wonders of the Ancient World, but many more opulent structures were also built here and it’s now a UNESCO World Heritage Site.

After the Romans arrived in 129 BC, Ephesus became the capital of western Asia Minor, and a walk through its ancient streets, taking in the state agora, temples and baths, offers an intriguing insight into life in one of Rome’s most important commercial hubs.

Things to see and do in Ephesus

The third largest library in antiquity, this elaborate structure was completed in the 2nd century AD and was built to store thousands of scrolls and act as a mausoleum for popular local dignitary Celsus. The library sits on a platform, its three front entrances flanked by Composite columns, while above them elongated windows are framed by pairs of Corinthian columns. Although the interior was destroyed by fire in the 3rd century, the façade survived for centuries and was rebuilt in the 1970s from painstakingly excavated fragments. Today, the restored frontage gives you a clear impression of the scale and grandeur of this intricate structure.

This Ionic temple, with double rows of columns on all four sides, was twice the size of the Parthenon, and its vast dimensions led to its designation as one of the Seven Wonders of the Ancient World. Rebuilt twice following a flood and an arson attack, the final structure, made from marble and decorated with relief figures from Greek mythology, survived for 600 years before destruction at the hands of the Goths. Although just one column remains standing, the excavated foundations, surrounded by pine trees and low-lying mountains, offer a sense of its former magnificence.

The only location beyond Rome and Antioch to have street lighting during the Roman era, Harbour Street linked the Great Theatre to the Middle Harbour Gate. It was Ephesus’ main thoroughfare and at 11 m (36 ft) wide, was one of the empire’s most impressive streets. Paved with marble and bordered by colonnades leading to covered walkways on each side, it was lined with shops selling expensive imported goods. Many of its columns and much of its paving still remain, and a walk down its 530 m (1,739 ft) length will give you an idea of the grand ceremonial welcome experienced by eminent visitors.

At the end of Harbour Street sits the Great Theatre, an ornate and imposing structure that could once accommodate 25,000 spectators. Although parts of the building were destroyed by an earthquake in the 4th century AD, much of it is well preserved and the steep climb to its highest level offers an impressive view down Harbour Street and across the slopes of Panayir Mountain. As well as plays, musical performances and gladiatorial games, political and religious events took place here. It’s even mentioned in the Bible as the backdrop to a clash between Saint Paul and local non-Christians.

There were several bath complexes in Ephesus serving privileged residents and visitors to the city wanting to wash after long, hot journeys. The two largest were the Scolastica Baths and the Bath of Varius, which both had a traditional cold water frigidarium, warm water tepidarium and a caldarium with hot water pool, as well as resting, seating and reading areas, and private rooms for the wealthiest citizens. Although the sites are not fully excavated, it’s possible to get a sense of their size and complexity, and their importance to Roman life.

Beyond the city’s borders in modern day Selçuk, a broken line of arches is a reminder of the six aqueducts that once served Ephesus in what was one of the most advanced water transportation systems in the ancient world. Completed in the 1st century AD, its marble columns and brick bridgework carried baked-clay pipes and transported water from the coast to the city’s fountains, latrines, public baths and houses. The remains of this system can be traced throughout the site, from partially unearthed terracotta pipes to the various ornate fountains dotted around the city.

Dating from the 2nd century AD, the Temple of Hadrian is a small but richly decorated structure that has been extensively rebuilt. On the façade, two Corinthian columns and two pillars support a curved pediment decorated with floral motifs and a relief of Tyche, the goddess of victory. Inside, the pronaos (vestibule) was decorated with a relief, while the internal chamber, or cella, once had a barrelled roof. The relief work in the pronaos is particularly fine and depicts local nobility and detailed scenes of city life. The original is on display in the Ephesus Museum in Selçuk, with a copy installed in the temple.

The Temple of Sebastoi — literally the ‘venerable ones’ — was originally known as the Temple of Domitian, after the emperor of the day. Built on a hillside and extending into the city, it was designed to impress and therefore bolster relations with Rome. Columns measuring 10 m (35 ft) high supported a vast podium on which the temple rested, while a marble altar and a statue of Domitian, believed to be 7 m (23 ft) tall, were prominent features. However, when the unpopular Domitian died, the temple was rededicated, its remains now offering important clues to the relationship between Ephesus and its Roman rulers.

You can visit Ephesus for much of the year, although we recommend the months of April, May and October when the site is less crowded and the weather is cooler for exploring. There is little shade on the site and between June and August temperatures reach around 33°C (91°F) and cruise ship visitors abound, while nearby hotels close between November and March. 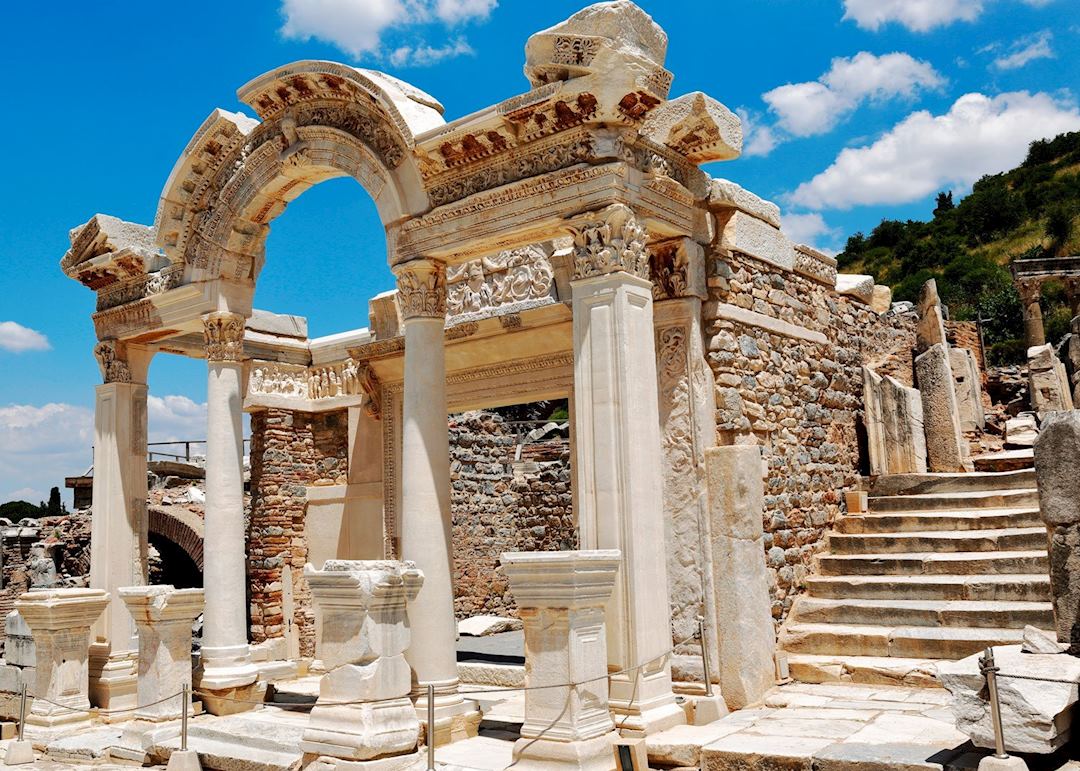 Start planning your trip to Ephesus