The city is set on a limestone plateau overlooking the sea and fans out from a Roman port in a series of narrow alleyways flanked by some of Turkey’s best-preserved Ottoman houses. Take a boat trip along the coast, attend live opera in a Roman amphitheatre, explore ancient cities or simply soak up the sun.

Kaleiçi, Antalya’s compact old town, is cradled within Roman walls, its narrow, cobbled streets providing a scenic backdrop to leisurely strolls. The monumental Hadrian’s Gate, with its three arches, was erected to commemorate the Roman emperor’s visit to Antalya in 130 AD, while the squat Hıdırlık Kalesi, a tower built as a mausoleum and later used as a guard post and lighthouse, dates from the same era. Elsewhere, you’ll find mosques and hammams, a covered bazaar dating to the late 15th century, and streets lined with Ottoman-era houses, many of which have been converted into boutique hotels.

The city’s most well known formal attraction is the Antalya Museum, which houses some of Turkey’s finest archaeological finds. Just west of the city, it features a series of comprehensive exhibitions on the history of the region, from the Palaeolithic era to the Byzantine age, and covers everything from prehistoric kitchen utensils to Roman statues and sarcophagi; Byzantine coins, lamps and incense holders, and sets of charms, seals and watches.

Many of the finest statues in the archaeological museum come from Perge, a prominent city in the 2nd and 3rd centuries BC, which lies 17 km (10 miles) east of Antalya. This extensive site has some impressive remains including a large theatre and stadium, colonnaded streets, well-preserved baths and a huge Roman gate. For a good overview of the site and its scale, climb the ridge to the acropolis.

Further east, 47 km (29 miles) from Antalya, is Aspendos, a sprawling ancient city best known for its remarkably well-preserved outdoor theatre which was built during the reign of Emperor Marcus Aurelius in the 2nd century AD. Built to seat 8,000, the theatre is surrounded by mountains and has near-perfect acoustics. In the summer, concerts, film screenings, and opera or ballet performances are held here but, even if you can’t attend, it’s worth visiting to explore the comprehensive city ruins that include a 3rd-century basilica, a large stadium and the remains of the agora.

High in a mountain valley, 34 km (21 miles) northwest of Antalya, lie the ruins of another ancient city, Termessos. Built by the combative Pisidians, and larger than Perge, it was once an independent state and dates back to at least 333 BC, when its inhabitants fought off an attempted invasion by Alexander the Great. Along with its dramatic setting and the sweeping views offered from this vantage point in the mountains, the ruins offer plenty of interest with temples, baths and colonnaded streets as well as a gymnasium, large theatre and intact city walls.

With 300 days of sunshine a year, Antalya makes a good year-round destination. Average temperatures in July and August are 33°C (91°F) but this is peak time for visitors and hotel prices are higher. April to June and September and October make better times to visit, while the winter months are cooler and wetter. 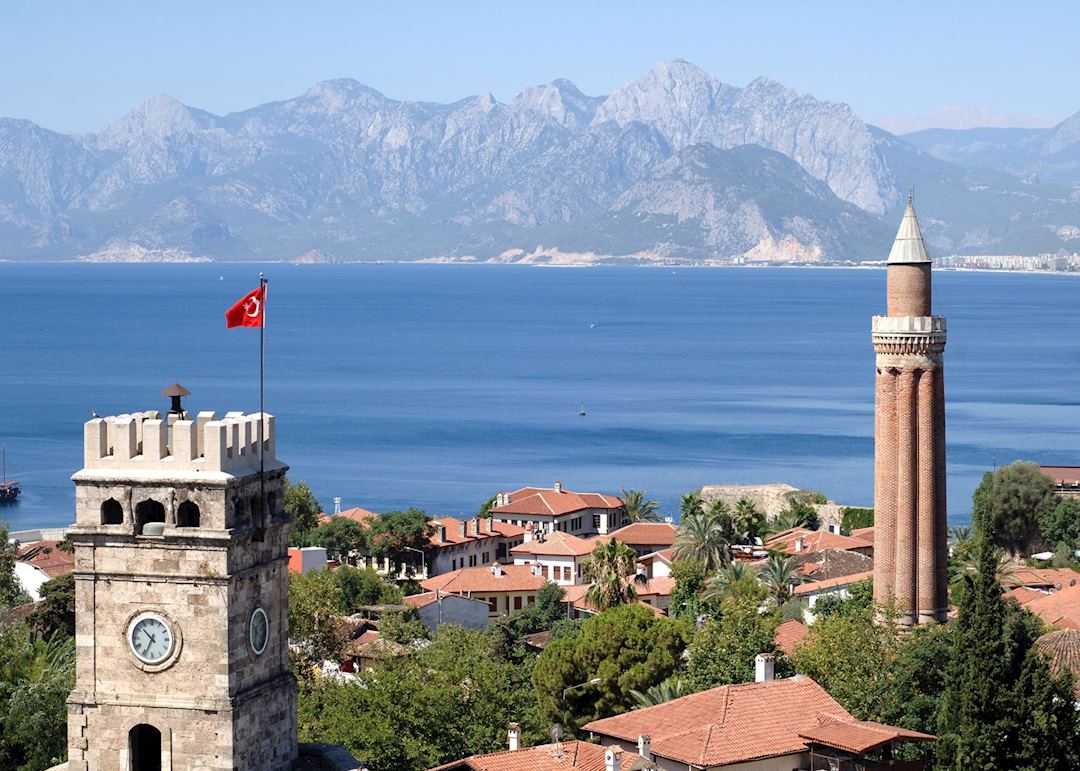 Start planning your trip to Antalya

We’ve selected a range of accommodation options for when you visit Antalya. Our choices usually come recommended for their character, facilities and service or location. Our specialists always aim to suggest properties that match your preferences.

Our specialists seek out authentic ways to get to know the places that could feature in your trip. These activities reflect some of the experiences they've most enjoyed while visiting Antalya, and which use the best local guides.