The unofficial capital of the French Riviera, Nice is a city with great heart and soul. Along with a twisting maze of medieval streets, an airy waterfront and a well-deserved reputation for fine dining, it offers Baroque and Belle Époque architecture, lively markets and a vibrant cultural scene.

Our specialists know Nice well, returning again and again to seek out the best places to eat and stay. They can guide you on how best to experience this vibrant city depending on your interests. It's got history, culture and character at every turn, and although a bit down-at-heel in places, it’s the authentic heart of the Côte d’Azur.

I like that Nice’s Old World grandeur has aged gracefully. A sunset stroll on the Promenade des Anglais is de rigueur, but I also enjoy exploring the markets and Old Town.

Things to see and do in Nice

Founded by the Greeks, settled by the Romans and heavily influenced by the Italians, Nice has a long and complex history and a cosmopolitan character. It wasn't until 1860 that the city officially became a part of France and you can still see the remains of a Roman arena and thermal baths in the hilltop Cimiez district. 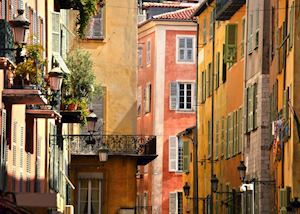 Most atmospheric of all, though, is the triangular area known as Vieux Nice (Old Nice), a wandering maze of narrow alleyways little changed since medieval times save for the boutiques, bars, restaurants and delis that now line its streets.

It's a place that’s made for wandering with no particular aim in mind. You might pick up local cheeses, olive oil or fruit at the market in Cours Saleya or visit its Baroque churches and elaborate mansions such as the Palais Lascaris. From the old town, walk up the staircases and past the waterfall on the hillside of Parc du Château for views over the city and down to Port Lympia, where you'll clearly see Italian influence at work in the Venetian-style façades of soft-hued buildings.

Looking out over the Baie des Anges (Angel's Bay), Nice's curving waterfront esplanade is the heart and soul of the city. It’s lined with cafés, bars, ice-cream parlors and restaurants that offer refreshments to the families, skaters, walkers and cyclists who ply the seafront.

The first section of the promenade was paid for by members of the English aristocracy who used to spend their winters here, but the local council, seeing its success, expanded the project. The promenade now stretches for 7 km (4 miles) along the bay.

Home to conceptual artists from all over Europe in the 1960s and 70s, Nice has a tradition of nurturing provocative art. This concept is explored in the Museum of Modern Art and Contemporary Art (MAMAC) which showcases work from the avant-garde movement from the 1960s to the present day, and features work by Christo and Yves Klein among others.

In the Cimiez district, you'll also find museums celebrating the works of Marc Chagall and Henri Matisse, both of whom lived nearby.

Our itineraries will give you suggestions for what is possible when you travel in Nice, and they showcase routes we know work particularly well. Treat them as inspiration, because your trip will be created uniquely by one of our specialists.

We’ve selected a range of accommodation options for when you visit Nice. Our choices usually come recommended for their character, facilities and service or location. Our specialists always aim to suggest properties that match your preferences.