Forests and wetlands, greater one-horned rhinos, standout birdwatching, and the temple-dotted birthplace of Buddha in the Terai 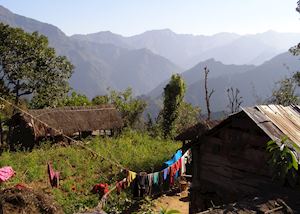 It’s Nepal’s little-played B-side, but the vast lowland region of the Terai makes for a nice counterpoint to the drama of the Himalaya. In this yawning expanse of farmland and grassland that stretches to the border with India, you’ll find the national parks of Chitwan and Bardia, where lush deltas, floodplains, and riverine forest help shelter populations of greater one-horned rhinos and plentiful birdlife. You can stay at one of our tried-and-tested lodges, where naturalist guides will help you explore on walking safaris and by 4x4.

Then there’s the town of Lumbini, considered to be the birthplace of Buddha, a fact only rediscovered in the 19th century by a Nepali governor and British archaeologists. Come for its peaceful temple complex, where differing national styles of Buddhist architecture sit side by side with the remains of an ancient monastery and the pool where the infant Buddha, Prince Siddhartha Gautama, first bathed with his mother.

Things to see and do in Terai 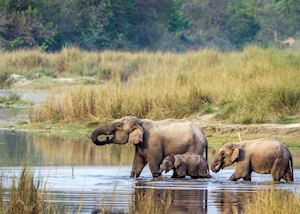 The better-known and most popular of the Terai’s two major national parks, Chitwan comprises thick clutches of deciduous sal trees, marshland, and grassy plains. Safari-style lodges on the edge of the park lead you into the interior by day, often in search of greater one-horned rhinos, which take top billing among the park’s cast of wildlife.

You might spot them wading in the Rapti River while on a boat safari, or peering out from among rich foliage as you explore the buffer forests on foot with a guide. More traditional game drives in a 4x4 are also offered, as well as canoe trips.

Bengal tigers lurk here, too, though you’re much more likely to see their pugmarks overlaying yesterday’s vehicle tracks, or scratches on a tree trunk, than glimpse one. And, there are many more creatures to spot.

You could see fish-eating gharial crocodiles, langurs, Indian bison, hundreds of butterflies, and many kinds of birds — local naturalists have over 500 species on their lists, including red-headed trogons and greater hornbills, to name just a couple. Sightings of leopards, sloth bears, and wild elephants are rarer, but possible.

The park’s lodges have strong links with local Tharu people, who also number many of their staff. While staying at a lodge, you’re likely to have the opportunity to watch a traditional Tharu dance and learn about their culture, which is heavily focused on the life of the forest and agriculture. You can reach Chitwan via a 25-minute flight from Kathmandu or a five-hour overland drive. Alternatively, you could replace some of the drive with a two-day rafting trip from Pokhara.

As well as being hubs for exploring the park, the lodges outside Chitwan National Park can be excellent places to relax after a busy trip through Nepal — alongside safari activities, they offer swimming pools, river views, sundowners, and spa facilities. 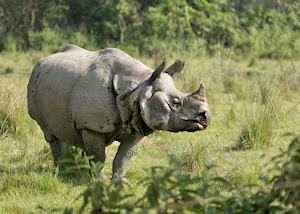 More remote and so a little more challenging to access, Bardia has many of the same ecosystems as Chitwan. It also has some upland areas and the bright waters of the Karnali River swirling through it all.

With far fewer visitors, thinner vegetation, and fewer watering holes, your chances of seeing Bengal tigers are increased. Also look out for greater one-horned rhinos and other species such as Asian elephants and jackals.

Places to stay are much more limited here — slick Karnali Jungle Lodge is the one place of note.

This workaday, dusty, and hard-to-reach town near the Indian border doesn’t make it onto many Western visitors’ itineraries to Nepal. But, in the middle of Lumbini’s sprawl lies the leafy, tranquil zone of the Lumbini complex, where Buddhists from around the world have erected their own temples and places of learning. Among them, you’ll find a Thai wat, a neoclassical-looking Austrian monastery, a golden-roofed Myanmar temple, and a Japanese peace pagoda.

The white, angular Mayadevi Temple is a focal point and stands next to the rectangular Pushkarini Sacred Pond, where the Buddha and his mother, Queen Mayadevi, are said to have bathed. Close by lie the stubby foundations of a ruined monastery and the bodhi tree stump, which is believed to mark the exact spot where Buddha was born.

Around the entire complex, which is landscaped with grass and pools, you’ll find pilgrims and monks from around the world meditating by the water, or under trees hung with prayer flags.

Best time to visit the Terai

The wildlife of Chitwan and Bardia national parks is most visible between the months of October and April, when dry, pre-monsoon conditions mean that vegetation is sparser. The dry days and cool temperatures of this period also make it a good time to visit Lumbini, as you’ll be almost entirely exposed to the elements while exploring the vast temple complex.

Places to visit in Terai

Featuring heavily on our experiences of visiting Terai, these selected places are destinations that also prove consistently popular with our travelers. Our specialists can help you choose how to include them in your wider trip, based on your preferences.

This sample itinerary will give you an idea of what is possible when you travel in Terai, and showcases routes we know work particularly well. Treat this as inspiration, because your trip will be created uniquely by one of our specialists.

Map view Places in and around Terai

Places in and around Terai

Our expert guides to exploring Terai

Written by our specialists from their own experiences of visiting Terai, these guides will help you make the most of your time there. We share both our practical recommendations and the best ways to appreciate Terai at its best.

We’ve selected a range of accommodation options for when you visit Terai. Our choices usually come recommended for their character, facilities and service or location. Our specialists always aim to suggest properties that match your preferences.