The entrance hall of The Balmoral, with its high ceiling and glorious flower arrangements, gives a taste of the opulence to come in a building that began life as a hotel in 1902. Located right in the heart of Edinburgh, The Balmoral enjoys views across the hills, spires and monuments of the city. The room decor is traditional, with deluxe fabrics and local Scottish artwork, while the hotel’s public areas have fireplaces, stained glass windows and hand-painted silk wallpaper. Dining options here are superb: the hotel has a Michelin-starred fine-dining restaurant as well as an excellent brasserie and whisky bar.

The Balmoral is one of our preferred hotels in Edinburgh, you can’t beat it for location and classic, deluxe grandeur.

Photos of The Balmoral

Rooms are tastefully decorated in the russet and purple shades of the Scottish landscape. The marble bathrooms all have a shower over the bath except the deluxe suites, which have separate baths and showers. Room types vary mainly by size and view. Classic rooms overlook the internal courtyard, executive and deluxe rooms have views of either the courtyard or the city, and superior deluxe rooms look out over the city. The junior suites either overlook the internal courtyard or the city, its gardens and the castle. All rooms have TVs and complimentary Wi-Fi.

The Balmoral is situated on the eastern end of Princes Street, directly above Waverley Station, with which the hotel used to be associated as a ‘grand railway hotel’. Both Edinburgh’s Old and New Towns are within easy distance on foot, and the concierge team can give you accurate walking times to the main attractions. Alternatively, the nearest taxi rank is directly outside the hotel’s front door and the nearest tram station is a five-minute walk further up Princes Street.

The Balmoral’s main restaurant, Number One, has held its Michelin star for over ten years and offers à la carte and tasting menus. Hadrian’s Brasserie serves an à la carte menu of classic dishes using regional produce in a more informal setting. Afternoon tea is served in Palm Court, an elegant room with a glass-domed ceiling and a Venetian chandelier. The Balmoral Bar is the hotel’s cocktail venue, while Scotch, the hotel’s whisky bar, boasts over 400 whiskies.

The Balmoral has a spa with a 15 m (49 ft) indoor pool, a steam room, a sauna, relaxation and treatment rooms and a gym.

Our itineraries are there to spark ideas for how you could include a stay at The Balmoral as part of your trip. Treat them simply as suggestions, because every aspect of the trip we create for you will be yours to define.

View all accommodation in Edinburgh

View all activities in Scotland

Edinburgh and nearby places 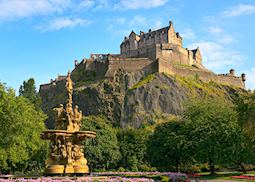