Nagarhole National Park, in the southern state of Karnataka, became a national park in 1955 and was once the exclusive hunting preserve of the rulers of Mysore. Sprawling around a huge reservoir, the surrounding land is lush with dense forests and marshy swamps. 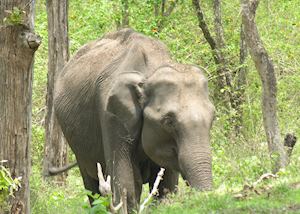 Nagarhole is most famous for its wild elephants, although a range of birds and other mammals are frequently spotted, as well as the occasional tiger. Game drives can be taken by coracle, motorboat or shared jeep.

The park is easily accessible by road from both northern Kerala and Mysore and is the best place to view wildlife during a tour of southern India.

This sample itinerary will give you an idea of what is possible when you travel in Nagarhole National Park, and showcases routes we know work particularly well. Treat this as inspiration, because your trip will be created uniquely by one of our specialists.

We’ve selected a range of accommodation options for when you visit Nagarhole National Park. Our choices usually come recommended for their character, facilities and service or location. Our specialists always aim to suggest properties that match your preferences.