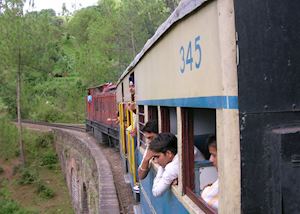 Starting at the buttermilk-yellow Christ Church overlooking the town, you can meander down the pedestrianised streets, which are trimmed with colonial frontages. The Gaiety Theatre, now an art gallery, once welcomed Rudyard Kipling and Lord Robert Baden-Powell to the stage. It’s difficult to miss the half-timbered town hall with its shingled eaves; it’s still the office of the Mayor of Shimla. The Viceregal Lodge, the summer residence of the Viceroy of India, is now an institute of advanced studies, but some rooms are open to the public.

Nodding to the days of Lord Kitchener, afternoon tea is taken on the outdoor terrace underneath fringed parasols. Tiny sandwiches and petit fours are served alongside local Himachali sidu (wheat-flour bread) and slices of akotri (gently spiced buckwheat cake). In the surrounding forest lies the hotel’s wild strawberry trail, a one-hour walk through cedar and pine trees where you might spot the iridescent monal pheasant, Shimla’s state bird.

Shimla is a gateway into the rest of the foothills region, with good — albeit windy — road connections. A day’s travel away, the foothills town of Dharamshala hosts the Tibetan government in exile. Here you can visit the Tsuglagkhang Complex, the official residence of the Dalai Lama and a refuge for sacred Buddhist texts. You’ll meet Tibetan refugees robed in traditional dress and be invited to try momos (steamed dumplings stuffed with vegetables).

From Dharamshala, a six-hour drive takes you to Amritsar and its lustrous Golden Temple. The holiest of Sikh shrines, the temple is surrounded by a marble water tank. Pilgrims travel from across the world to bathe in its sacred waters, said to have healing powers. The city is close to the border with Pakistan, where you can witness the daily border-closing ceremony, performed with military pomp and flamboyant marching.

Our itineraries will give you suggestions for what is possible when you travel in Shimla, and they showcase routes we know work particularly well. Treat them as inspiration, because your trip will be created uniquely by one of our specialists.