Camel riding in the Wadi Rum

Wadi Rum is one of the great Middle Eastern wildernesses. Over the years it has provided a refuge to the hardy Bedouin who knew how to survive and thrive in its arid landscape.

Many of Lawrence of Arabia's exploits unfolded here and more recently the harsh backdrop of fissured rock and red sand has doubled up as the surface of Mars in several films.

One of the best ways to experience Wadi Rum is to take a camel ride in the area. Lasting around an hour, the ride will give you a real insight into traditional Bedouin life in the deserts of Arabia.

Photos of Camel riding in the Wadi Rum

Other experiences in Wadi Rum 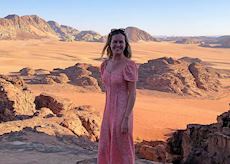