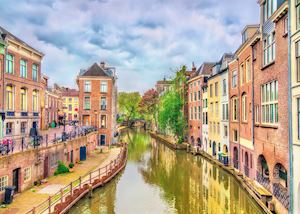 We can arrange a private walking tour of Utrecht’s old town, a pedestrian-only area with many buildings dating to the High Middle Ages, prior to 1300. You’ll get a chance to explore the canal house cellars, wide doors directly on the water that form a second street level, lined with restaurants, cafes, bars and hotels. 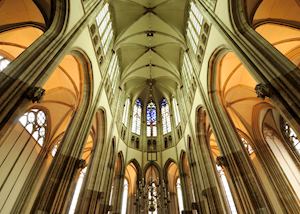 From Utrecht, we can arrange day trips to Amersfoort and Kröller Müller, two lesser-known but worthwhile destinations. Amersfoort is a cobblestoned city with an intact brick city gate that spans both the water route and the land route into the town’s medieval streets. Kröller Müller is a modern art museum and sculpture park set in the sand dunes of Hoge Veluwe National Park.

Travel from late March through late October to avoid most of the rain and snow in the winter months. In spite of the region’s variable weather, the warmer months are best for enjoying the medieval old town and the water-level terraces along the canals. Weekends bring market stalls, which make the town busier. Many museums are closed on Mondays, along with many restaurants and cafes, so be sure to check hours before you visit.