What to do in the Galapagos: our highlights guide

Visiting the Galapagos is a completely unique and intimate wildlife experience. Due to the way species have evolved on the islands, most of the animals don’t have any real predators, making them completely fearless.

For visitors, this creates a unique and intimate wildlife experience, where you often have to step over iguanas basking in the sunshine and sea lions parade around you on the sand.

Wildlife spotting in the Galapagos

Look for the blue-footed booby

The blue-footed booby is well distributed across the islands, and a particular curiosity is their mating dance, which can be seen between May and July. The males attract the females by showing off the blue hue of their feet.

The first time I saw this was on North Seymour Island. We noticed two birds on top of the cliffs performing a strange little dance. Mirroring each other they repeatedly opened their wings, arched their necks, and picked up one foot after the other showing off their feet over and over again before reaching their heads up to the sky and letting out a small cry. The female then tucked her head under her wing signifying the success of the male in courting her.

The flightless cormorant is only found on the western islands, and in certain spots on Fernandina and Isabela. Its stubby and tattered looking wings are solely used for swimming and they are extremely fast in the water. They can dive to great depths and their ability to remain underwater for a long time is incredible.

If you’re travelling around the western islands between May and October you might also see their courtship in progress. The male and female swim in circles around one another before moving back to the cliffs where the female sits and the male brings her presents of flotsam from the ocean. If she likes them she incorporates them into her nest.

The flightless cormorants are impressive to see at any time of year, but witnessing this courtship performance is very memorable.

Due to ongoing conservation work by the national park authorities, the endangered giant tortoises are making a comeback on the Galapagos, where once their populations were decimated by early explorers, buccaneers and whalers. They were considered to be a useful source of fresh meat on journeys, as they could be stored alive below deck.

There are now breeding centres that are working to increase their numbers, releasing the tortoises back into both wild and semi-wild environments. The most common places to see them are in the highlands of Santa Cruz, and in these breeding centres.

Look for the waved albatross

The waved albatross is another extraordinary creature. It’s only found on Española Island in the southeast of the Galapagos and can be seen there from April to November or December. At this time of year you can see around 12,000 breeding pairs of these magnificent birds with their enormous wingspan of up to eight feet.

In early April you might also spot them performing their courtship dance, in which they clatter their beaks together. Whilst not on land, they spend their time fishing out at sea for months at a time.

You’ll spot sea lions everywhere in the Galapagos. As well as on the beach and in the water around Santa Cruz and San Cristobal, they can sometimes be seen lounging on the benches in the town and begging for scraps at the fish market.

The frigate bird has a similar wingspan to the albatross, but is differentiated by its red throat pouch, which the males puff out like a balloon to attract a mate.

Also known as ‘pirate birds’, the lack of waterproofing on the frigate’s feathers means they can’t spend any significant time in the water. To feed they often chase other sea birds, such as the boobies, harassing them until they regurgitate their catch. Different species can be seen in various locations across the archipelago, and the birds can often be observed soaring above the boats as you sail between the islands.

Endemic to the Galapagos Islands, these prehistoric-looking reptiles are powerful swimmers. When not in the water, they can be found basking in the sunshine, warming up between dives, snorting out excess salt and clustering together for warmth.

Start planning your holiday to the Galapagos Islands 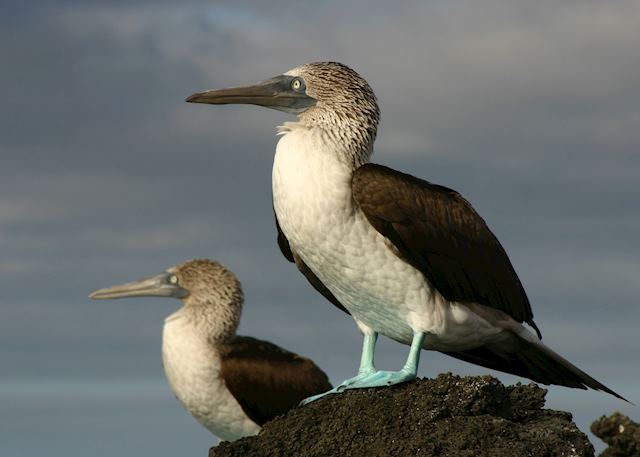