Wildlife highlights of the Galapagos Islands

Here’s what I love about the wildlife in the Galapagos Islands: you don’t go looking for it, you bump into it. On the surface, a shell bobbing along reveals itself to be a marine turtle. Dodging nesting birds or basking iguanas is par for the course. They don’t flinch. They don’t see humans as a threat here. You’re on their territory now.

Wildlife in the Galapagos is prolific, fearless, and in close proximity to you. It’s also some of the most biodiverse, weird and wonderful nature you’re ever likely to see. Many endemic species developed here in isolation, such as giant tortoises, Darwin’s finches, flightless cormorants and marine iguanas. I also saw species I never expected to find, like a flock of pink flamingos in a brackish lagoon.

Here, in no particular order, I’ve picked out what I consider to be the best wildlife experiences in the Galapagos Islands, both underwater and on terra firma. Please be aware that you won’t necessarily see all of these species on one single trip, but no matter which islands you visit, they’re all fascinating in their own right.

How can you see wildlife in the Galapagos Islands?

97% of the Galapagos Islands is national park, and so heavily protected. Visitors may only walk on set trails, accompanied by a guide. Some islands are off-limits to all visitors except certified scientists.

While this may sound restrictive, it ensures responsible travel and conserves these vulnerable ecosystems. It also makes for a more rewarding experience. You’ll be visiting islands in small groups with an experienced naturalist guide.

The guides’ enthusiasm is contagious. They’ll give you a full picture of the islands’ wildlife and landscapes. They’re also well versed in the Darwinian and evolutionary history of the Galapagos. They can, for example, point out each island’s finches, explaining how they adapted to their particular environment.

The Galapagos Islands’ main entry point is Santa Cruz. From here, you have three main options: set off on a cruise around the islands; go island-hopping, visiting two or three islands by public speedboat or plane; or, alternatively, stay in a hotel on Santa Cruz and take day trips. Bear in mind, though, that you’ll spend many hours or more getting to and from your destination each day if you choose a land-based stay. Therefore, I’d recommend staying and sleeping on an expedition vessel, for as long as you can.

A four-day expedition cruise will take you around some of the key islands in the archipelago. Longer trips will visit wilder, more remote islands like Genovesa, with the bulk of the journey made at night. Each vessel receives a pass from the Galapagos National Park, and itineraries are allocated to boat operators to reduce impact.

I’ll jump right in and dispel a common Galapagos myth. In the islands open to visitors, you’re very unlikely to see giant tortoises bumbling about freely.

Giant tortoises are usually high on most people’s lists, being one of the species that people most associate with the Galapagos Islands. I truly think that the tortoises are best seen in a research station. This actually enhances, rather than hinders, your experience of them, and it’s a great way to learn about the breeding projects in place.

Try to visit the Charles Darwin Research Station on Santa Cruz, or one of the equivalent stations on Isabela or San Cristóbal. I was lucky enough to see 100-year-old Lonesome George, the last of the pinta species, before he died. Though seeing George is no longer possible, a visit to a research station is still a rewarding experience. In the station’s vast pits and pens, you’ll get a good look at creatures of all ages, from coin-sized youngsters to boulder-like veterans. I learned to identify the different sub species by their shells.

What I enjoyed most about the Charles Darwin Research Station was the scientific, conservationist context it gave to my trip. There’s an excellent explanation of how Darwin used Galapagos mockingbirds and finches to form his theory of evolution. You’ll also get an understanding of the conservation efforts being made to protect the islands today.

About 95% of the Galapagos’ 2000-strong penguin population is found in the Western Islands of Isabela and Fernandina, and sightings are never guaranteed.

I was surprised, then, to see them at Bartolomé Island. A barren, lunar-like landscape, geologically it’s one of the most striking places in the Galapagos. At one end, basaltic Pinnacle Rock spikes skywards. Volcanic spatter cones, a spray of squat scalesia trees, red-sand beaches and solidified lava flows form its surface.

Most visits to islands also involve a guided walk on land to a viewpoint.

It was here I first encountered Galapagos penguins, the only wild penguin found swimming in equatorial waters. The world’s second smallest penguin, they have black banding on their chests and a white border around their eyes. Tottering comically by their nests, in the water they were spectacularly lithe.

Theirs is a treacherous existence, as they’re preyed upon by Bartolomé’s Galapagos sea lion population.

One of the farthest flung islands in the archipelago, Genovesa is formed around a sunken volcanic crater.

Crossing the expanse of open water between Genovesa and Santa Cruz gives you a greater chance of seeing some of the Galapagos’ larger marine mammals such as whales (though admittedly, it’s rare to see these and they should never form the focus of any trip). While I was standing looking out on deck, a pod of common dolphins started to jump and frolic in the ship’s bow waves.

Some Galapagos Islands, I should point out, aren’t picturesque. Don’t expect a tropical idyll. Genovesa is all rough, gnarled volcanic rock with scrubby vegetation, and dark, lava-formed cliffs. Its main draw is its birdlife.

Once moored, you can climb the uneven Prince Phillip Steps to reach the top of the horseshoe-shaped caldera. Birds flap all around like a cloud of bats. As our guide led us on a trail, a constantly moving flock of storm petrels was being picked off in turn by short-eared owls and Galapagos hawks. The non-predatory birds were everywhere.

You’ll find red-footed or masked boobies sitting in the middle of the path. I kept having to step over them, though the adults and chicks were completely unperturbed. Frigate birds, with their distinctive pterodactyl-like profile, sat in the branches of spindly trees and skimmed overhead. Closer to the coast, boobies dived headlong into the waves.

Like everywhere in the Galapagos, tropical fish abound. I counted parrot fish, eels and lobsters as well as ubiquitous sea cucumbers. I also floated mere feet away from octopuses and reef sharks. Like the boobies and frigate birds, they seemed oblivious or fearless, and would swim tantalizingly close.

Witness the mating ritual of the frigate bird

The so-called pirates of the Galapagos, frigate birds are aggressive scavengers. They’ll dive-bomb other birds until they steal their catch. They also snap up unwitting turtle hatchlings, and steal nest twigs from other birds.

Curious and never intimidated, they’re often found sitting on ships’ masts. You’ll see them all over the islands – North Seymour, just north of Santa Cruz, is a good place. But Genovesa is as good a spot as any to witness their distinctive courtship ritual.

During mating season, the males swell up their bright scarlet heart-shaped chest pouches. Aiming to be as conspicuous as possible to females, they’ll often sit in a high spot, on display for hours. Conveniently for us, this makes them easy to spot.

Slightly greener than Genovesa, Española was also formed from an erupted shield volcano.

After making your way up beaches crowded with snoozing sea lions, you’ll follow a trail to the cliff tops. This is the territory and only breeding ground, of the island’s most famous inhabitant, the endemic waved albatross. Breeding pairs tend to arrive around April, staying on to nest until roughly November.

Our guide brought us to an observation point around 3 m (10 ft) away from a colony. As we watched pairs preening each other (albatrosses, incidentally, are monogamous), others were preparing for take-off. We were so close, we could see the texture of their prettily mottled grey and white plumage.

We watched as a succession of turkey-sized birds began pawing the ground like horses and flexing their wings. Then they would launch themselves off the cliff and swoop down over the ocean to find food.

The distinctly prehistoric-looking marine iguanas found all over the Galapagos is the world’s only marine lizard. On the small, flat, and partially forested island of Santa Fé, you’ll also find an endemic, pinkish-orange sub-species of land iguana. Here, it’s possible to see both types of iguana at the same time. If you’re a keen photographer, there’s the challenge of capturing them both in the same shot.

I was delighted to see the marine iguanas exactly as I’d seen them in wildlife documentaries. Masses of them gather on the lava flows. Immobile, they could easily be mistaken for crusty, spiny stumps of stone. Then they leap into the sea. Underwater, they nibble at algae on the rocks. The land iguanas seem to have a more lackadaisical existence, chomping cactus flowers.

Go to the pier in Puerto Ayora

If you do wish to stay a couple of nights on dry land during your time in the Galapagos, head for the main town of Puerto Ayora. I like the nearby Finch Bay Hotel. A short boat ride from the town, expect to share your swimming pool with squabbling pintail ducks and herons and see Darwin’s finches looking for spare crumbs at breakfast.

Nature overlaps with the urban in the Galapagos. One of the best examples of this is Puerto Ayora’s pier at sunset. Simply waiting for a water taxi, you might see pelicans fishing and perching on the railings. The pier’s green lights attract young sharks, while sea lion pups chase each other and splash nearby.

Start planning your wildlife trip to the Galapagos Islands 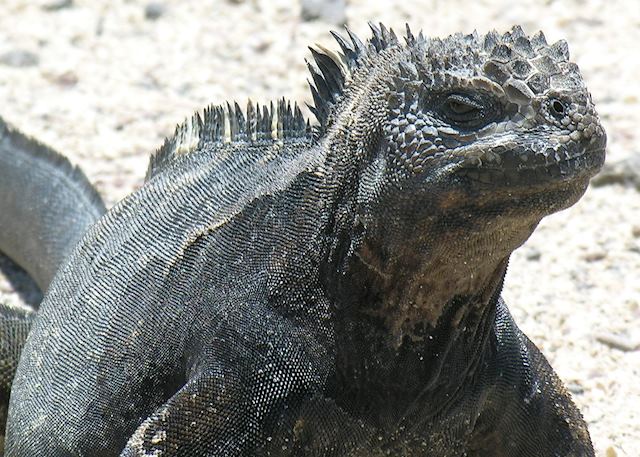