Named for Queen Victoria, this garden city is situated in the south of Vancouver Island and is the capital of British Columbia.

Compact and easily navigated, it lends itself to discovery on foot, in a horse-drawn carriage or, thrillingly, from a low-flying float-plane.

Victoria is adorned with some lovely colonial architecture such as the Parliament Buildings while the Empress Hotel is an historic gem, an excellent place to take afternoon tea. The nearby Butchart Gardens are world-renowned, as is the Royal British Columbia Museum while other attractions include Craigdarroch Castle, the home of artist Emily Carr, and orca whales which visit the waters off the island in the summer. 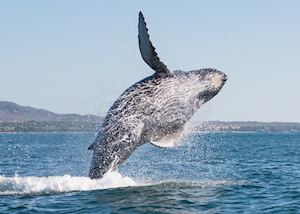 The waters around Victoria are home to three resident pods of orcas, or killer whales. Famously savage but graceful, these magnificent sea mammals can be seen from 14-meter ocean cruisers or inflatable Zodiacs, both fast and stable, on trips that also often sight minke and gray whales, porpoises and harbor seals, with a commentary provided by on board marine biologists.

Our itineraries will give you suggestions for what is possible when you travel in Victoria, and they showcase routes we know work particularly well. Treat them as inspiration, because your trip will be created uniquely by one of our specialists.

Our expert guides to exploring Victoria

Written by our specialists from their own experiences of visiting Victoria, these guides will help you make the most of your time there. We share both our practical recommendations and the best ways to appreciate Victoria at its best.

We’ve selected a range of accommodation options for when you visit Victoria. Our choices usually come recommended for their character, facilities and service or location. Our specialists always aim to suggest properties that match your preferences.