Backed by snow-capped mountains, dotted with large parks and hugged by the sea, there are few cities with a natural setting that compares to Vancouver. It’s as easy to explore the great outdoors here as it is to dine in a Michelin-starred restaurant.

The city’s compact size means you can fit many activities into a single day, whether you choose to explore Stanley Park by bicycle and learn about the region’s First Nations heritage, stroll through the streets sampling the diverse gourmet food expertly cooked in front of you, or gain a wider perspective of the area’s natural beauty on a scenic seaplane flight.

Whenever I visit Vancouver, I find myself struck afresh by its beautiful setting between snow-capped mountains and the Pacific Ocean. I love to ride through the city on a bicycle to find new discoveries.

Things to see and do in Vancouver 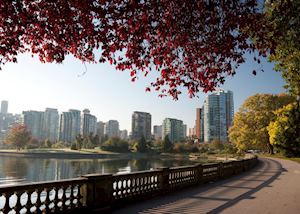 Established in 1886, Stanley Park is Vancouver’s first and largest urban park. Rather than being designed by a landscape architect, its dense forest is completely natural, with the park and city evolving as one over the years.

Surrounded by the waters of English Bay and Vancouver Harbour, the park is best explored by bicycle. Dedicated cycle trails weave through the forest and along the seafront, and guided cycle tours are available. Your guide will lead you to Brockton Point, where nine totem poles reflect the park’s First Nations heritage. You’ll take in views of downtown Vancouver, English Bay and Lion’s Gate Bridge, keeping a lookout for wildlife such as raccoons, beavers and blue herons.

From markets and food trucks to craft beer breweries and high-end restaurants, Vancouver’s food scene is incredibly varied and continues to grow. On a two hour guided tasting tour, you can sample some of the city’s tastiest and most innovative delicacies, learning how different cultures have influenced the cuisine you try.

We particularly recommend the Vancouver Street Eats Tour, where you can sample gourmet street food and watch food truck vendors cook their specialities. Strolling through the backstreets, you might stop to try a Japanese hot dog, watch as fresh local salmon is hot smoked, or visit a food cart with built-in tandoor ovens for making freshly baked naan bread.

The scope of Vancouver’s natural beauty can be appreciated from above by taking a seaplane flight over the city and its surroundings. You’ll experience the splash of the water as you take off and land at Coal Harbour to enjoy incredible views over the city, English Bay and the North Shore Mountains.

There are several flight options, ranging from brief ten-minute loops over Vancouver and Stanley Park to longer 20 or 45 minute experiences flying over the region’s parks, beaches and coastline.

A novel option is joining a 90 minute ‘mail run’ flight. The seaplane makes stops to deliver the post on the Gulf Islands and Salt Spring Island off Vancouver’s western coast, giving you the opportunity to explore the islands’ rural communities on foot or by bicycle.

Go whale watching on the Strait of Georgia

Lying between Vancouver and Vancouver Island, the Strait of Georgia is home to several resident orca pods, along with migratory gray and humpback whales between June and October. Sea lions, porpoises, otters, seals and bald eagles are also frequently sighted.

A boat trip out on the strait gives you close views of the wildlife. The professional wildlife guide on board will point out and describe the species you encounter. They also know the best places to look as you travel through the tranquil scenery of the Gulf Islands. The Zodiac boats that are used were designed for marine mammal viewing, gliding over the water instead of crashing through it.

Vancouver offers a choice of nine beaches spanning 18 km (11 miles) — one on a freshwater lake, the rest beside the ocean. When the weather is pleasant, they become popular with Vancouverites and visitors alike, who swim, sunbathe, picnic, surf, kayak and play volleyball.

Some beaches or sections of beach are designated ‘quiet’ zones. Examples include Sunset Beach at the mouth of False Creek, and Spanish Banks West, which has picnic tables and allows barbecues. Others, such as Kitsilano Beach and English Bay Beach, are a hive of activity for families, featuring heated saltwater pools, tennis courts and water sport facilities.

Soak up culture in Gastown and Chinatown

A two hour guided walking tour takes you through Gastown, plus another of Vancouver’s most interesting districts — historic and vibrant Chinatown. Your guide will show you the famous steam clock. While it looks like it’s come straight from a Dickens novel, it was actually installed in 1977 to cover a steam grate.

Visit the Museum of Anthropology

The University of British Columbia’s Museum of Anthropology holds a vast collection of artifacts and exhibitions related to world arts and cultures, specifically the First Nations peoples native to the region.

The museum charts the rich indigenous cultures along Canada’s West Coast, as well as those from Africa, Asia and Latin America. Collections include original artwork, sculptures, textiles and archaeological objects from around the world.

Set on Vancouver’s far western coast, the building’s glass walls provide vistas of the surrounding woodland and the Salish Sea. You’ll be greeted by First Nations wooden sculptures and totem poles in the entrance hall, and guided tours are offered each day.

Vancouver is a year-round destination, but from April to June the days are longer and warmer, prices lower and it’s quieter. The whale watching and salmon-run seasons are in full swing in September and October; temperatures are pleasant, the summer crowds are gone and trees turn golden brown as autumn arrives. It’s considerably cooler between November and March. July and August are the warmest months, but also the busiest.

Our itineraries will give you suggestions for what is possible when you travel in Vancouver, and they showcase routes we know work particularly well. Treat them as inspiration, because your trip will be created uniquely by one of our specialists.

Our expert guides to exploring Vancouver

Written by our specialists from their own experiences of visiting Vancouver, these guides will help you make the most of your time there. We share both our practical recommendations and the best ways to appreciate Vancouver at its best.

We’ve selected a range of accommodation options for when you visit Vancouver. Our choices usually come recommended for their character, facilities and service or location. Our specialists always aim to suggest properties that match your preferences.

Our specialists seek out authentic ways to get to know the places that could feature in your trip. These activities reflect some of the experiences they've most enjoyed while visiting Vancouver, and which use the best local guides.