Bogotá is a cosmopolitan city tucked on a high plateau in the Andes of central Colombia, 2,640 meters (8,661 feet) above sea level.

The average temperature is around 57 degrees Fahrenheit. 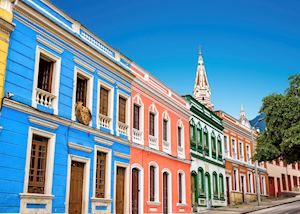 Bogotá has much to offer the intrepid traveler, the old town of Candelaria is full of small cobbled streets and colorful buildings and some excellent museums.