The epitome of Colombia’s renaissance and the country’s second-largest city, Medellín lounges among the fertile green hills of the Antioquía region. Rewind to the 80s and 90s, and its name would send a shiver down the spine. But, the city’s status as Escobar’s narcotics nexus and ravaged gangland is firmly in the past. Visit today, and its nickname ‘the city of eternal spring’ is immediately apparent in its almost year-round temperate weather. This can make a welcome change from the stickier subtropical climate you experience in other parts of Colombia. 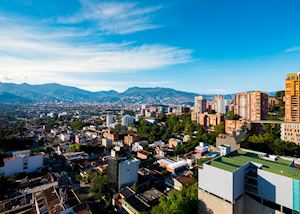 Cable car (teleferico) lines spider out from Medellín’s central districts on the valley floor to the barrios (slums) clinging to the mountain slopes. It’s the most eye-catching aspect of a very joined-up public transport system that has proved vital to reversing the city’s fortunes.

Connecting these poverty-stricken areas with the more prosperous central business district has given barrio residents a better quality of life and job prospects, and broken the grip of the drug cartels. Now, if you choose to visit Comuna 13 — formerly one of the most dangerous barrios — you’ll find libraries, hubs for the arts, literacy projects, and young people taking part in music and dance workshops.

Back down the hill, Medellín’s nucleus is an airy grid of streets where buildings from the city’s 17th-century beginnings rub shoulders with sleek, confidently contemporary architecture and plenty of green spaces. You can easily explore it all by bicycle (Medellín is a city of cyclists), along a good network of paths.

The Palacio de la Cultura Rafael Uribe is a grand Gothic Revival concoction with a chessboard-like exterior that hosts concerts and exhibitions. Meanwhile, the botanical gardens have the Orquideorama, an organic-looking wooden meshwork of ‘flower-trees’ that recalls the hexagons of a honeycomb. The structure helps protect an orchid collection, and acts as a reserve for butterflies.

Mayoralty and urban planners made it a priority to locate some of the ‘most beautiful’ buildings in the once down-at-heel barrios — hence the existence of the Biblioteca España (Spanish Library). This gleaming, blocky trio of towers sits in the Santo Domingo district, its angular shapes and folds echoing the city’s mountainous backdrop.

The city has its more eccentric sides, too. You might witness exuberantly painted chiva buses (essentially mobile discos) carousing around the streets on Friday and Saturday nights. Another key part of the city’s personality, and something to keep looking out for, are the statues crafted by Medellín native Fernando Botero. 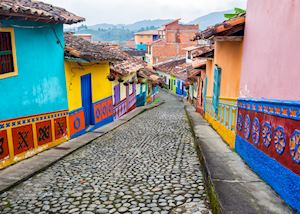 There’s something celebratory and generous about his bulbous bronzes, which depict humans as pudgy, oversized figures. One of his most beloved works is La Gorda, a voluptuous reclining female found in Plaza Botero, just next to the Palacio de la Cultura.

Then, the city’s elegant 17th-century Señora de la Candelaría church contains the Torso de Mujer, a woman’s torso in bronze that has become one of Botero’s most iconic works; it finds its opposite in the Torso Masculino in Parque San Antonio.

The same park also houses El Pájaro de Paz (The Bird of Peace), which was damaged by a FARC bomb in 1995. Botero requested that the mutilated sculpture remain in place, a mute testimony to pointless violence. In addition, a new fully intact recreation was erected alongside the damaged original.

You’ll find many more of Botero’s works, including his paintings, in the city’s main art gallery, the Museo de Antioquia.

A short teleferico ride away lies the lungs of the city. The eucalyptus and pine forest of the Parque Arví (a public park) tempts visitors with a host of mossy walking trails alongside fern gullies and burbling, pebbly streams. You can choose a small corner of it to explore: its gargantuan size makes places like Central or Hyde Park look like mere lawns.

You can visit Colombia’s second city almost all year round: in fact, it’s renowned for its mild climate, which can become cooler in the evenings. It hosts a much-loved flower festival every August and extravagant Christmas light displays in December. 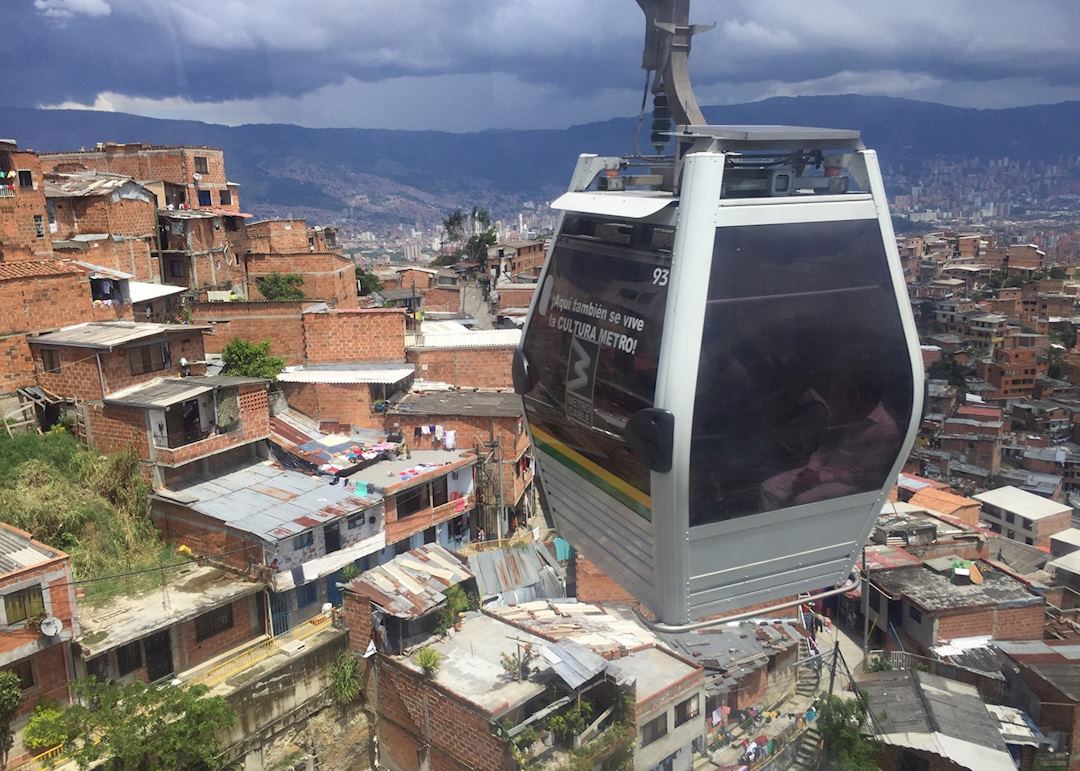 Start planning your trip to Medellín

Our expert guides to exploring Medellín

Written by our specialists from their own experiences of visiting Medellín, these guides will help you make the most of your time there. We share both our practical recommendations and the best ways to appreciate Medellín at its best.

We’ve selected a range of accommodation options for when you visit Medellín. Our choices usually come recommended for their character, facilities and service or location. Our specialists always aim to suggest properties that match your preferences.

Our specialists seek out authentic ways to get to know the places that could feature in your trip. These activities reflect some of the experiences they've most enjoyed while visiting Medellín, and which use the best local guides.