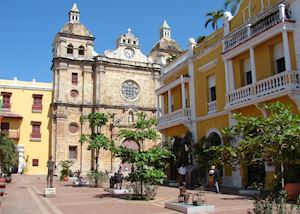 Today, you can best enjoy the walls on languorous afternoon strolls (a tradition called ‘paseo’) or even a guided walk. Do as the locals do, and stop off at one of the cafés lining the walkways. Here, you can look out over a huge sweep of the Caribbean Sea. Seats inevitably fill up around sunset.

Aside from the walls, the city has three main architectural highlights. The Castillo de San Félipe de Barajas, the largest fort ever built by the Spanish colonialists, sits atop a grassy mound and looks almost like a multi-story Mesoamerican pyramid. You can wiggle your way through its tunnels on a guided tour.