Strasbourg sits squarely at the crossroads of France and Germany, a geographical vantage point that has made it the official home of the European Parliament. The capital city of France's Alsace region (formally known as Grand Est), simply walking the streets of Strasbourg gives you a vivid sense of how Germanic and Gallic cultures rub alongside each other companionably here.

Though you’re in France, residents might chat to you in either French or German. Haussmann-tinged apartments with wrought-iron balconies sit next to buildings that could have been lifted straight out of the Black Forest. France’s alfresco café culture is alive and well, but you’ll also find microbreweries creating Alsatian beers as well as down-to-earth winstubs (taverns) serving hearty Germanic fare. And, while we’re on the subject of food and drink, note that Strasbourg makes an excellent staging post for exploring the Alsatian wine route.

Things to see and do in Strasbourg

The glass-and-steel hollow tower of the European Parliament, along with the other contemporary edifices that make up Strasbourg’s European institutions, are a 30-minute riverside walk from the city’s central district. Despite their imposing structures, most parliamentary work takes place in Brussels, though official voting is always held here.

The European Parliament buildings aside, the heart of Strasbourg is, in fact, incredibly historic and even storybook-like in parts. The city sits right on the Rhine River, giving parts of it the look of waterside Amsterdam, while other streets are crammed with medieval half-timbered houses, their windows decorated with jaunty flower boxes.

Elsewhere, artfully ramshackle bars, chic boutiques, and stately, Parisian-esque mansions line the streets. And, for a real touch of fairy-tale whimsy, you might notice white storks nesting on the roofs of buildings. They’re an important folk-tale emblem of the town, reported to bring good weather as well as newborns.

The most photogenic part of the city is arguably this former tanners’ district, where — contrary to what the name suggests — the ambience is very much old-world Alsace. Black-and-white timber-framed houses huddle together on winding, cobbled lanes. Winstubs — traditional Alsatian taverns — proudly advertise their house specialty, choucroute garnie (sauerkraut served with bratwurst and smoked meats). For a more casual snack, however, you can pick up a slice of flammekueche, or tarte flambée — a flat, pizza-like slab laden with fried onions, lardons, and melted cheese.

It’s a great place to stroll around, weaving your way over the weirs and locks of the Ill River, which rushes around and through the quarter.

In early December two of the city’s main squares come alive with German-style Christmas markets, called Christkindelsmärik. The air is full of the heady spices of glühwein (mulled wine) and gingerbread, and the scent of chocolate-smeared waffles. And that’s just the food — markets also sell handicrafts and Christmas decorations.

Made up of rows of wooden cabins decked out in fairy lights, the Christmas markets are a real festive experience, and — allegedly — a historic fixture, too: they claim to be the oldest Christmas markets held on French soil.

Looking further afield, the city is connected by direct TGV fast trains to Switzerland, Luxembourg, plus many French and German cities, making it easy to include in all kinds of Europe itineraries.

Medieval castles, gently rolling hills, and villages made up of half-timbered buildings make up the Alsatian Wine Route, the oldest in France. The villages are the soul of the route: rather than stopping at vineyards for tastings, you’ll call into wineries based in villages. This quirk is a result of the rather turbulent identity-changing and border disputes that have historically occurred between France and Germany.

You could journey the whole 170 km (105 mile) route, from Marlenheim in the north to Thann in the south, or pick selections of it. Either way, you can expect to explore rieslings, gewürztraminers, and even the local sparkling wine, the crémant d’Alsace.

Spring and summer lend themselves to relaxed strolls by the Rhine, and it’s when you’ll see the city’s flower boxes in full bloom. However, another good time to visit Strasbourg is December, when the Christmas markets roll into town and the whole place is lit up with festive cheer. 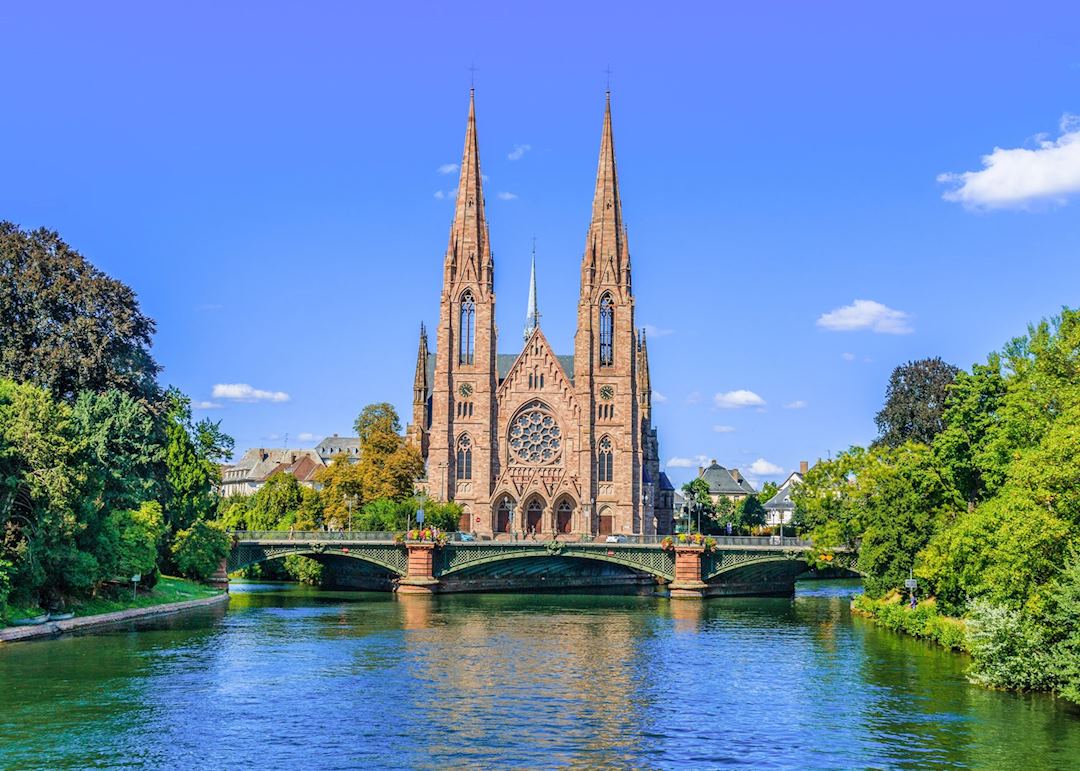 Start planning your trip to Strasbourg

We’ve selected a range of accommodation options for when you visit Strasbourg. Our choices usually come recommended for their character, facilities and service or location. Our specialists always aim to suggest properties that match your preferences.

Our specialists seek out authentic ways to get to know the places that could feature in your trip. These activities reflect some of the experiences they've most enjoyed while visiting Strasbourg, and which use the best local guides.