Perched on a hilltop above a blanket of vineyards and cherry orchards, the medieval village of Ménerbes dominates the surrounding landscape. Holding a strategic elevated position, it has been inhabited since ancient times, with evidence of a Roman settlement sitting alongside the jumble of gloriously characterful 16th- and 17th-century villas, townhouses and shops that line the narrow winding streets. As you wander, you're treated to views of the craggy hills, wooded valleys, vineyards and farms that surround the village.

Ménerbes sits east of Avignon in the Parc Naturel Régional du Lubéron, a natural park of exposed moorland and cedar forest that ranges over cliffs of white limestone and red ocher. To the south of the village, the Lubéron Valley opens out before you, while to the north views sweep over the plains as far as Mont Ventoux.

Ménerbes gained exposure in recent years through its association with British writer Peter Mayle, who made the renovation of a farmhouse outside the village the subject of his 1989 book A Year in Provence. 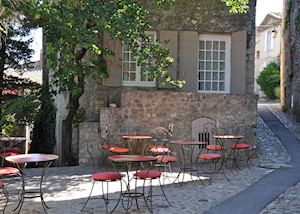 Although throngs of visitors followed in the book’s wake, the village has returned to its tranquil self. Its labyrinthine cobbled lanes are lined with atmospheric old buildings, the odd café or restaurant, and a lively market on Thursday mornings.

The village's most significant site is the small 16th-century fortress known as the Citadelle. At the time of its construction, the village was a stronghold of Huguenots and fell under attack and siege from 12,000 Catholic troops. The villagers held out for five years before running out of water and surrendering.

At the far end of the village is the grand Château du Castellet, where expressionist painter Nicolas de Staël once lived. Picasso also bought his mistress a house in the village. Over the years, many artists and writers have been attracted to Ménerbes, but agriculture has always been at its heart.

Set in a restored house in the village is the Maison de la Truffe et du Vin (House of Truffles and Wine). Here, the Brotherhood of Truffles and Wine of the Luberon, who represents 60 local domaines (vineyards), offers free wine tasting from April to October, truffle workshops in winter, and a whole host of local produce for sale at greatly discounted rates.

This sample itinerary will give you an idea of what is possible when you travel in Ménerbes, and showcases routes we know work particularly well. Treat this as inspiration, because your trip will be created uniquely by one of our specialists.

We’ve selected a range of accommodation options for when you visit Ménerbes. Our choices usually come recommended for their character, facilities and service or location. Our specialists always aim to suggest properties that match your preferences.