With handsome streets lined by stone houses, winding cobbled lanes and on average 300 days of sunshine a year, Saint-Rémy is quintessential Provence. The town lies just south of Avignon at the foot of the slopes of the Parc Naturel Régional des Alpilles (Alpilles Region Natural Park) and was the birthplace of 16th-century prophecy maker Nostradamus.

It’s home to significant Roman ruins and the monastery where Van Gogh once recovered from a bout of psychosis. Our specialists love to return here to seek out new experiences, and we’ll help you to plan your trip specifically around your interests. 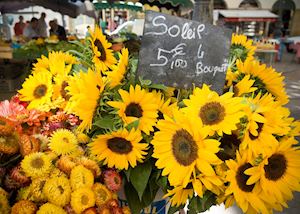 Market days, each Wednesday morning, are the liveliest, when local producers gather to sell goods that draw from the region’s natural resources. Olives and oils feature heavily, as do honey, cheese and wooden bowls carved from olive wood.

The town also hosts many festivals and special events throughout the year, the largest of which is held on Pentecost Monday. Thousands of sheep are herded through the medieval streets before being brought to their summer grazing grounds in the mountains.

Just outside the town is the ruined Gallo-Greek city of Glanum, which was later populated by the Romans. The area has been inhabited since 500 BC and was a thriving place eventually elevated to the status of a Roman colony. The triumphal arch by the entrance dates from 20 AD, and nearby an even older mausoleum is thought to date from sometime between 30–20 BC. Many of the original buildings are clearly visible as you wander along pathways flanked by houses, baths, temples, and the basilica and forum.

Saint-Rémy also has strong connections to Vincent van Gogh, who admitted himself to the local monastery-psychiatric house of Saint-Paul de Mausole in 1889. An outstanding example of Provençal Romanesque architecture, the monastery is still used as a psychiatric hospital but you can visit Van Gogh's reconstructed room, learn about the psychiatry of the 19th century and see the cloister and gardens he so loved. While here, he drew and painted about 300 works, among them his series of irises.

This sample itinerary will give you an idea of what is possible when you travel in Saint-Rémy-de-Provence, and showcases routes we know work particularly well. Treat this as inspiration, because your trip will be created uniquely by one of our specialists.