A starkly beautiful lake hemmed in by volcanic formations, flooded calderas and bubbling, sulfurous mud pools, Lake Mývatn is a highlight of a trip to Iceland’s northeast. This huge spring-fed body of water was created by volcanic activity 4,000 years ago and sits on the Mid-Atlantic Ridge, the meeting point of two divergent tectonic plates.

The landscape here was forcefully shaped by its extreme geological position. It’s markedly different to the rest of the country in its sculptural lava formations, fumaroles, volcanic craters and island-like pseudocraters, which dot the birdlife-filled lake. 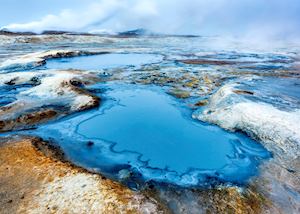 The most obvious geothermal activity is at Hverir, just east of the northern boundaries of the lake, where the lunar landscape is pitted with bubbling mud pots, steaming vents and fumaroles. Mineral deposits streak across the ocher flats and roped walkways show you where it’s safe to cross the geothermal field. For panoramic views of the area, take the marked half-hour trail up the Námafjall ridge.

North of Mývatn, you’ll find more geothermal activity at the Leirhnjúkur crater, part of the Krafla volcanic system. The lava fields here are still steaming, and the craters are filled with water of varying powdery hues. The ground is burning hot in places, but marked paths will show you the way. Nearby, the smaller Víti crater is filled with powdery blue water, an arresting sight in the surrounding ocher landscape. On warmer days you can wild swim here.

Heading south along the eastern edge of the lake, you come to the Mývatn Nature Baths, a low-key thermal bathing place that’s far less commercial than the better-known Blue Lagoon. There’s a simple café and basic changing rooms, but a visit here is all about lounging in the mineral-rich geothermal waters and admiring the surrounding landscape.

South of the baths, the lava field at Dimmuborgir is awash with weird formations created when a lava pool formed over a marshy area, causing the water below to boil. Steam rose through the lava, creating hollow pillars that remain today.

Marked walks lead through the strange structures and give you sweeping views of Hverfjall, a massive volcanic crater. A further track leads up to the summit, from where you can see into the crater and get a bird’s-eye view of the surrounding landscape. 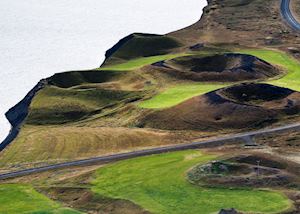 At Skútustaðagígar at Lake Mývatn’s southern end, you can see rings of raised earth formed when lava flowed into the lake, causing the water below to boil and rise to the surface in giant bubbles that dimpled the lava. These pseudocraters fleck the water and the lake shore, while the pond at nearby Stakhólstjörn attracts large numbers of waterbirds.

Lake Mývatn is a haven for birdlife, and the best place to see the birds up close is on the western side of the lake. You can rent telescopes and hides from Sigurgeir’s Bird Museum, which is set in a modern lakeside building with a traditional turf roof. The museum has an impressive collection of specimens from around the world, as well as all Icelandic breeding birds bar one.

During the summer, you can also take a tour into the interior to visit the remote Askja caldera. Massive in size, it stretches more than 50 sq km (19 sq miles) and has the cerulean lake Öskjuvatn at its heart.

The massive forces that created the unusual landscape here attracted the attention of NASA in the 1960s. The dry, remote region became a test and training ground for their Apollo astronauts preparing for lunar missions.

Our itineraries will give you suggestions for what is possible when you travel in Lake Mývatn, and they showcase routes we know work particularly well. Treat them as inspiration, because your trip will be created uniquely by one of our specialists.

Written by our specialists from their own experiences of visiting Lake Mývatn, these guides will help you make the most of your time there. We share both our practical recommendations and the best ways to appreciate Lake Mývatn at its best.

We’ve selected a range of accommodation options for when you visit Lake Mývatn. Our choices usually come recommended for their character, facilities and service or location. Our specialists always aim to suggest properties that match your preferences.

Our specialists seek out authentic ways to get to know the places that could feature in your trip. These activities reflect some of the experiences they've most enjoyed while visiting Lake Mývatn, and which use the best local guides.