The region northwest of Akureyri between the fjords of Skagafjörður and Eyjafjöður offers scenic driving, a rich history and a glimpse of small-town Icelandic life. Steep-sided mountains plunge into the fjords on either side of Tröllaskagi (Troll Peninsula) with deep green valleys, lush meadows, natural hot pools, remote farmhouses and historic towns between them. Far fewer visitors make it to this part of the country than the south, but its combination of dramatic landscapes, poignant history and opportunity for outdoor adventure make it well worth the effort to reach. 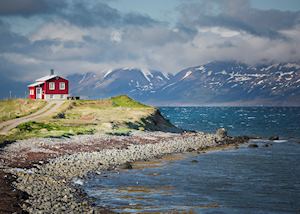 The largest town on the peninsula, Siglufjörður, is Iceland’s most northerly. It sits at the foot of steep mountains overlooking an inky fjord and was once one of the world's herring capitals. Today, its old wooden shops, warehouses and homes have been restored, new hotels, restaurants and galleries have opened, and it has become one of the most interesting towns in the country to visit.

The Icelandic TV crime drama Trapped was filmed here, but the town’s major attraction is the award-winning Herring Era Museum, which recreates the town’s boom days in early 20th century. It’s set in a series of old warehouses and depicts daily life at a time when the herring industry was so successful it helped pulled the whole country out of poverty. Every year in August, the Herring Festival takes place, recreating the gold-rush atmosphere of the town’s heyday.

Admission to the museum also includes entry to the Icelandic Folk Music Centre, which has displays of 19th-century instruments and recordings of traditional Icelandic songs. Another good stop in Siglufjörður is Segull 67 Brugghús, a local microbrewery, which offers tours. All around the town you’ll find restaurants and cafés serving local delicacies produced by small, family-run food producers on the peninsula, and at visit Ektafiskur in Hauganes you can try Iceland’s infamous hákarl (fermented shark). 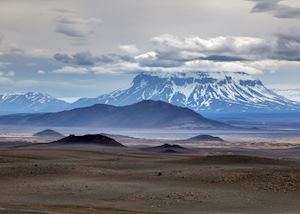 Summer offers great hiking in the area around Siglufjörður. The easiest trail runs up the mountain behind the town and offers panoramic views of the village and port below as well as the surrounding fjords. A network of trails laces across the peninsula and around the highest peak, Kerling (1538 m/5,046 ft). Mountaineering is also popular here, while there’s horse riding on the lower slopes and skiing in winter.

Hofsós, on the west coast of the peninsula, has a small Icelandic Emigration Centre which traces the source of the exodus of Icelanders leaving for North America in the late 19th century. Further south in Hólar, look out for the red sandstone cathedral, Iceland’s oldest stone church. Completed in 1763, it contains a 16th-century carved altarpiece and a 17th-century soapstone baptismal font. Concerts are held here in summer.

We also suggest visiting the Hofsós swimming pool, which perches right on the end of the sea. Very few visitors make it up here to enjoy the views over the fjord as you soak in the geothermal waters. It was designed by Sigríður Sigþórsdóttir, the same architect responsible for the more-crowded Blue Lagoon.

A 90-minute drive to the south, the village of Varmahlíð is known as the horse riding capital of Iceland. Small and shaggy Icelandic horses graze everywhere in the valley and you can find a wide array of riding options. You can also choose from a selection of white-water rafting adventures, with options for families as well as thrill seekers.

On the peninsula’s east coast, the little town of Dalvík is home to the Bryggsmiðsjan Kaldi Brewery and is a good point to join a whale-watching tour. Humpback, minke and blue whales have all been spotted in the area, or you could try your hand sea angling.

The Troll Peninsula makes a good destination year-round, with extremely long days from May to August. The lively Siglufjörður Herring Festival takes place in August and whale-watching tours run from February to November. Between October and April some attractions, shops and cafés have limited opening hours.

Our itineraries will give you suggestions for what is possible when you travel in Troll Peninsula, and they showcase routes we know work particularly well. Treat them as inspiration, because your trip will be created uniquely by one of our specialists.

We’ve selected a range of accommodation options for when you visit Troll Peninsula. Our choices usually come recommended for their character, facilities and service or location. Our specialists always aim to suggest properties that match your preferences.