Hotel Majapahit is a classic landmark hotel full of history and a source of national pride. Its graceful architecture, landscaped gardens, pool, spa, gym and tennis court complete the Majapahit's colonial style with modern comforts that make for a pleasant rest on a busy itinerary. The 23 Garden Terrace Rooms feature a spacious bathroom adorned with opulent gold and marble, a luxurious bedroom plus direct access to a terrace overlooking the magnificent garden courtyards. The 89 Executive Suites are larger and more luxurious.

Built in 1910, the hotel was originally named the Oranje Hotel (after the Dutch Royal family) by Lucas Martin Sarkies of the famous Armenian family whose collection of grand hotels includes Raffles in Singapore, The Strand in Yangon and Eastern and Oriental in George Town, Penang. Charlie Chaplin and Paulette Goddard attended the opening of a new Art Deco style addition to the front of the hotel in 1936. By 1942 Surabaya was occupied by Japanese forces and the hotel was renamed 'Yamato Hoteru' or 'Hotel Yamato'.

The most significant part of the hotel's history took place at the end of World War II. On September 19th, 1945 at 6am, the Dutch leaders in Surabaya raised the Dutch red-white-blue flag on the main flag pole of the hotel. It was a symbol to show Dutch colonial control after the allies' victory in World War II. Indonesians considered the raising of the Dutch flag on top of the hotel as an insult to Indonesia's proclamation of independence, which was made in Jakarta on August 17th. By 6.30am, a crowd of angry Indonesians who had gathered in front promptly raised a cry of 'Merdeka' (freedom), lowered the offending flag, and tore off the bottom of blue strip, thus turning it into the Indonesian flag. Confusion and tragedy ensued. A British commander was murdered in October and a full scale invasion was launched the following month, beginning on November 10th 1945. This day is celebrated nationally as Heroes Day and Surabaya is called 'The City of Heroes' with an appropriate monument to mark the famous battle.

For the next few months, while the revolution carried on in Surabaya, the hotel was known as Hotel Merdeka or the Liberty Hotel. By 1946 the hotel was again managed by the Sarkies family and underwent yet another name change to Hotel L.M.S (after its founder Lucas Martin Sarkies). It continued as such until 1969 when a new group of owners decided to call it the Majapahit, after one of ancient Indonesia's most enduring kingdoms. This name, its fifth in nearly 60 years, has been retained up until today.

Our itineraries are there to spark ideas for how you could include a stay at Hotel Majapahit Surabaya as part of your trip. Treat them simply as suggestions, because every aspect of the trip we create for you will be yours to define.

Surabaya and nearby places 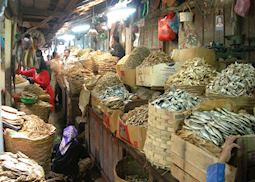