According to Christian tradition, Bethlehem is the holiest of places: the birthplace of Jesus. This fabled town is known the world over and has become a major pilgrimage site for Christians. There are a variety of sights associated with the bible that you can visit, as well as traditional markets, archaeological sites and rural monasteries. Bethlehem sits in the West Bank, just 10 km (6 miles) from Jerusalem, but to get here you must cross the controversial West Bank barrier, a concrete wall now liberally adorned with political street art.

For Christian pilgrims, Bethlehem’s key sight is the Church of the Nativity, believed to stand on the site of Jesus’s birthplace. A church has stood here since the 4th century but it has been destroyed and rebuilt on several occasions since. The main entrance is a tiny opening in the stonework called the Door of Humility that makes everyone to bow down to get through. Inside, red and white columns, some adorned with Crusader-era frescoes, line the nave, while spyholes reveal glimpses of the 4th-century floor mosaics below.

Descending into the lantern-lit Grotto of the Nativity, a silver star marks the spot where Jesus is said to have been born. The Chapel of the Manger sits to one side, the Altar of the Adoration of the Magi on the other. The latter is said to have been spared by Persian attackers in 614 as the Magi are depicted wearing Persian dress. 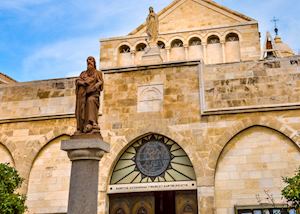 Far from being a place of harmony, the grotto is a hotly contested treasure with Orthodox, Catholic and Armenian clerics sticking to a 250-year-old management system, whose complex rules still ordain who is entitled to do what in the grotto.

The Church of the Nativity sits on Manger Square, the main meeting place for locals and visitors and is flanked by the neo-Gothic Franciscan Church of Saint Catherine which has a Crusader-era cloister and sits above a series of caves. On the other side of the square is the 19th-century Mosque of Omar, the only mosque in Bethlehem’s Old Town.

Elsewhere in the Old Town, you’ll find a traditional bazaar which spreads almost the entire length of Fawagreh Street, with stalls stacked with spices, olives, oils, fruit and vegetables. Also in the Old Town is the Milk Grotto, said to be the place where the Holy Family hid before their flight to Egypt.

East of the city, in the suburb of Beit Sahour, the park-like Shepherds Fields is, according to tradition, the spot where the angels first announced the birth of Jesus. Two churches mark the spot, the red-domed Greek Orthodox Church of the Shepherds which is built above a cave and 4th-century Byzantine church remains, and the Franciscan Chapel of the Angels, which lies a short distance away.

Another nearby destination is Herodium, south of Bethlehem, the palace fortress of Herod the Great which dates from the 1st century BC. Set on the flatted top of the highest peak in the Judaean Desert, the ruins of this extensive complex include Herod’s tomb, bathhouses, a pool, aqueducts, gardens and palatial halls.

Arriving into Bethlehem from Jerusalem, you’ll have to pass a checkpoint in the contested West Bank barrier which divides the two cities. It’s one of the most visible symbols of the Israel-Palestine conflict and, as such, has attracted a wide variety of political street artists whose work adorns the West Bank side, including notable works by UK artist Banksy.

Bethlehem can be visited year-round but for the best temperatures, April and May, and September to November are the most pleasant — although can be busier and costlier. June to August can be very hot and busy, while winter can be cold and wet. If possible, visit midweek for quieter streets and attractions.

Our itineraries will give you suggestions for what is possible when you travel in Bethlehem, and they showcase routes we know work particularly well. Treat them as inspiration, because your trip will be created uniquely by one of our specialists.

Our expert guides to exploring Bethlehem

Written by our specialists from their own experiences of visiting Bethlehem, these guides will help you make the most of your time there. We share both our practical recommendations and the best ways to appreciate Bethlehem at its best.

Our specialists seek out authentic ways to get to know the places that could feature in your trip. These activities reflect some of the experiences they've most enjoyed while visiting Bethlehem, and which use the best local guides.