Home to thick green jungles, French colonial ruins and an ancient temple thought to be the blueprint for Angkor Wat, the Laotian province of Champasak is located on the Mekong River in the southwestern region of the country near the Thailand and Cambodia borders. Here, you can take a guided tour of the Khmer period ruins of Wat Phou, a UNESCO World Heritage site, located at the foot of mount Phou Khao. You can also cruise along the Mekong on a converted rice barge cruise. Further downstream, take a boat tour of the 4,000 Islands, an archipelago of tiny islets and sandbars amid the braided streams of the Mekong, where you can explore on bicycle.

The region, which is named for the former capital of the Kingdom of Champasak, offers enough to keep you entertained for several days. It’s also easy to reach by flying to Pakse, the local hub for southern Laos.

Pakse was once a French outpost and the European influence is apparent in the faded colonial architecture left behind among the traditional wooden-stilted Laotian homes. The second-largest city in Laos, Pakse is nestled between the Mekong and Xedong rivers, the red-roofed buildings on the riverbanks providing a stark contrast to the water. 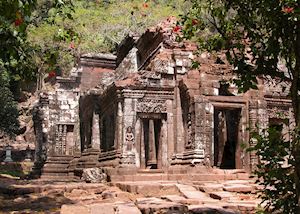 On the west bank of the Mekong just south of Pakse, the ruins of the historic Wat Phou are framed by the densely forested Phu Kou mountain. Construction of the temple began at the end of the 10th century, and continued until the 14th century, when the Angkor Empire went into decline.

Wat Phou, a Hindu-built temple, was dedicated to Shiva, and you can still see carvings and portraits of his representation when you visit. Though small in stature, the temple is large in symbolism, and pilgrims flock there during the full moon of the third lunar month for the three-day Buddhist Bun Wat Phou Champasak festival.

About 10 km (6 miles) from Wat Phou, you can visit the small town of Champasak, the former seat of the Kingdom of Champasak. We can arrange a guided walking tour of the town, which is built primarily around one main road that runs parallel to the Mekong. The road splits around an old colonial fountain, overgrown with greenery, forming a circular intersection for the rare car that drives through.

Guesthouses dot the riverbank in Champasak, all offering a view of the winding Mekong during your stay. Passage on the Mekong isn’t possible everywhere along the river, but Champasak has calm waters, and we can arrange a private day-long boat tour to take explore the waterway. 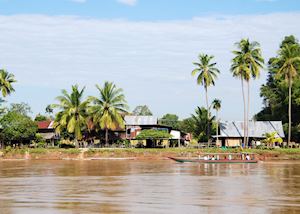 As the river flows south toward the Cambodia border, it breaks into a web of tributaries, creating an archipelago of islands called the 4,000 Islands. This area is quiet — the islands are largely uninhabited and mostly void of tourists. Here, you can take a private boat for a tour of the islands.

By lunchtime, you’ll be at palm-shrouded Don Khone island. There, you can cycle around the island to explore the French colonial buildings and take in the Liphi Waterfalls, which rage over a series of ragged boulders. You’ll then head to the mainland and visit Khone Phapheng — a powerful waterfall that sends whitecaps tumbling over the rocks.

Scenery isn’t the only draw of the 4,000 Islands. Here, visitors can get up close and personal with wildlife. Paddle a kayak along the Mekong and you might come eye-to-eye with water buffalo or catch a glimpse of the endangered freshwater Irrawaddy dolphins.

Laos has a tropical climate, and is best to visit between October and April while the weather is warm and dry. For those looking to travel on the Mekong River, the best time to visit is between November and January, while the water levels are high.

Green season is between late May and October, when rain returns to the area. However, the rain showers are short and don’t impede exploration. During the green season, waterfalls begin to flow and the landscape becomes verdant, attracting more wildlife.

Our itineraries will give you suggestions for what is possible when you travel in Champasak, and they showcase routes we know work particularly well. Treat them as inspiration, because your trip will be created uniquely by one of our specialists.

We’ve selected a range of accommodation options for when you visit Champasak. Our choices usually come recommended for their character, facilities and service or location. Our specialists always aim to suggest properties that match your preferences.

Start planning your tailor-made vacation by contacting ​one of our certified Laos specialists... 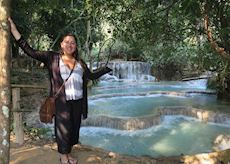