Glacially formed valleys flooded by the ocean form the splintered coastline of the Marlborough Sounds. A waterworld of bays, inlets and hidden coves, above the sealine it’s spliced with ridges clad in native forest and peppered with small farming and fishing villages.

The sounds are worthy of exploration in their own right. But, they’re also the gateway to the South Island’s Marlborough wine region, and the two areas can be easily explored alongside each other. It only takes about half an hour to drive between them, and they form a great first stop on any South Island road trip. 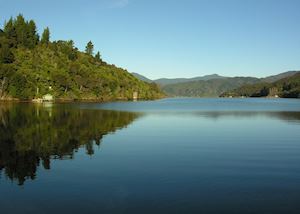 The Marlborough Sounds are many people’s first glimpse of New Zealand’s South Island if approaching overwater from Wellington. You step off the ferry into Picton, an unassuming town with a palm-lined waterfront, tucked into the foot of green hills. It’s only a half-hour drive to Havelock, the region’s other main town, which devotes itself to touting New Zealand’s succulently oversized green-lipped mussels ― grown in the sounds. You can get there via the winding Queen Charlotte Drive, a scenic road with lookouts over the sounds.

However, to experience the sounds at their most peaceful, you need to venture out from Havelock or Picton to one of the guesthouses tucked away in the coves, which are usually only accessible by water taxi. From here, you can rent a sea kayak or canoe to get a seal’s-eye view of the waters. There are dolphin-watching boat trips, and orca have also been known to surface here. In-between the main sounds, you’ll find several barely visited beaches.

One of the country’s Great Walks, the Queen Charlotte Track, begins at Ship Cove out in the sounds. We explain the appeal of hiking here in our expert guide to walking and trekking in New Zealand. If you don’t want to take on something of that scale, there are many shorter tracks. 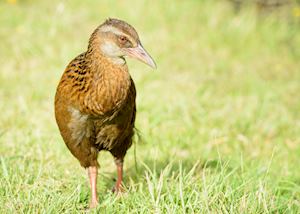 The winding, weaving Sounds are home to wildlife, including the rare Okarito brown kiwi, which lives in the coastal forest fronting the sheltered waters. The dawn chorus here is a particularly tuneful one as birdlife flourishes in the sounds: you can hear the calls of fantails and tauhous, among others, from the bush. Motuara Island, just off the coast from Ship Cove (the trailhead for the Queen Charlotte Track) even acts as a bird sanctuary, with a population of rare king shags.

Heading inland, you come to Blenheim, the main town of the Marlborough wine region. An attractive town with floral gardens and a community of craftspeople, it’s really just a base for exploring the vineyards themselves, which first sprung up in the 1970s. You can follow driving routes around the region, popping in for informal tastings at cellar doors ― we recommend combining big-name wineries, such as Cloudy Bay, with smaller boutique places.

Even better, explore by bicycle. You’ll wind along roads flanking neat rows of vines with views out to green hills — the hazy Richmond Range (hazy because this is one of the sunniest regions in all New Zealand). While in the area, you could also call into the Omaka Aviation Heritage Centre, which has a display of World War I aircraft masterminded by Peter Jackson.

October and November (springtime), then March and April, offer a good compromise between fairly warm temperatures and fewer crowds. Though, you can visit year-round if you’re prepared to risk rainfall.

This sample itinerary will give you an idea of what is possible when you travel in Marlborough Sounds, and showcases routes we know work particularly well. Treat this as inspiration, because your trip will be created uniquely by one of our specialists.

We’ve selected a range of accommodation options for when you visit Marlborough Sounds. Our choices usually come recommended for their character, facilities and service or location. Our specialists always aim to suggest properties that match your preferences.

Our specialists seek out authentic ways to get to know the places that could feature in your trip. These activities reflect some of the experiences they've most enjoyed while visiting Marlborough Sounds, and which use the best local guides.