In some ways the city combines three cities in one. The first impressions are usually of the sleek and prosperous infrastructure of the business and entertainment districts, a vibrant, sophisticated and truly international commercial hub that exists largely to serve the neighboring canal. Beyond this, at the extreme southwest of the bay, Casco Viejo is an attractive district comprised of beautiful 17th and 18th century churches, where convents and museums are interspersed with stunning colonial mansions built by the Spanish and French. 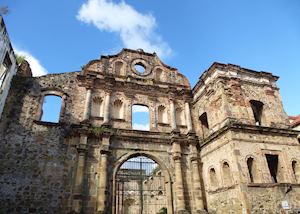 This old city center has plenty of charm and a diverse selection of museums, colonial churches and nineteenth century mansions all painted in an array of different colors. Casco Antiguo is home to the presidential palace and was declared a UNESCO World Heritage Site in 1997. Although Casco Antiguo is a poor neighborhood, the area is slowly being restored and regenerated.