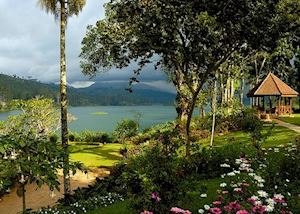 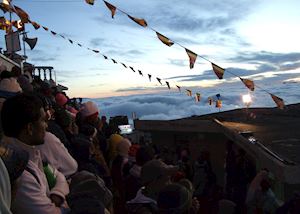 Due to the site’s importance, it’s not a wilderness climb to the peak. Instead, you ascend a staircase of around 5,000 steps that has been built into the mountainside, with benches and refreshment stalls along the way. At the top (2,250 m, 7,326 ft), a temple surrounds the boulder, and worshipers leave fruit, flowers and religious figurines.

Colonial tea planters nicknamed the region ‘little England’ for its cool weather and higher than average rainfall. You’ll need to be prepared for the odd shower year-round, but the best time to go to Hatton is from January to April, when it’s relatively dry and daytime temperatures hover around 28°C (82°F). It’s possible to visit at other times of year but, as weather patterns across Sri Lanka can be complex, we recommend discussing your plans with one of our Sri Lanka specialists, who can suggest the ideal time based on your interests.