The leopards aren't necessarily easy to spot. Take a 4x4 safari into the park — dawn or dusk works best due to cooler temperatures and increased animal activity — with an experienced guide and have your binoculars to hand. Safaris tend to last three to four hours, heading through the park's meandering 4x4 tracks and focusing on the rocky outcrops where the leopards like to laze. 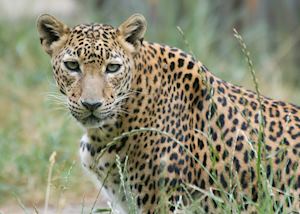