The headquarters for the UN and the Red Cross, a soaring water fountain, a flower clock and the namesake lake, all in Geneva 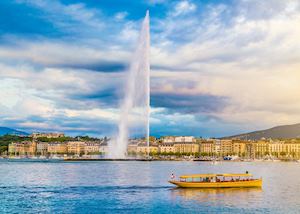 The first of its kind, the jet was created in 1886 as a release valve for a hydraulic power network. Once its esthetic value was recognized in 1891, it was moved to its present location and strengthened to celebrate the 600th anniversary of the Swiss confederation. The present fountain was completed in 1951.

The large park that houses these buildings also contains various well-known works of art. One of the most notable is the Broken Chair sculpture, a gigantic wooden chair with one torn-off leg, originally created in support of a treaty to ban landmines and cluster bombs. 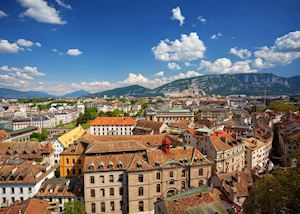 Our itineraries will give you suggestions for what is possible when you travel in Geneva, and they showcase routes we know work particularly well. Treat them as inspiration, because your trip will be created uniquely by one of our specialists.