This quietly cosmopolitan locale on Lake Geneva’s eastern shore boasts music legends and storied castles, as well as an intersection of beachfront lifestyle and sub-Alpine majesty. Nestled between the water and the foothills of the Alps, Montreux enjoys a Mediterranean microclimate that’s made it a resort destination since the 19th century.

Known as the hub of the Montreux Riviera, the town’s laid-back sophistication draws many luminaries. The town hosts a world-renowned jazz festival every July, and has hosted musicians, writers and artists like Igor Stravinsky, Vladimir Nabokov and Freddie Mercury, whose statue is prominent on the flower-strewn waterfront.

Vineyards dominate the steep terraces above the town, and we can arrange for you to taste the reds and whites that the area produces, along with the region’s signature cheese fondue and dried meats.

On the town’s southern edge sits the 13th-century Chillon Castle, a strategic site that’s been continuously occupied for close to a millennium. 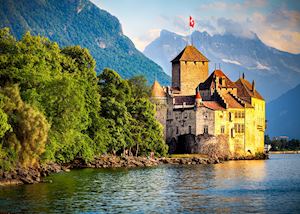 Lake Geneva, one of the largest lakes in Western Europe, sits along the border between Switzerland and France, and French-speaking Montreux partakes of the sun-drenched, flower-decked feel of the French countryside. Nestled at the base of the Swiss Alps, the town is part of a collection of villages along the balmy shore that calls itself the Montreux Riviera.

The waterfront itself offers a mix of old and new architecture along a garden-like promenade aptly called the Quai des Fleurs. It’s also the location of the town’s most decadent hotels and casinos, including the Montreux Palace Hotel, a grande dame built for the rich and famous in 1906.

Freddie Mercury made his home in Montreux, and we can arrange a waterfront walk that ends at his prominent statue. Statues of Quincy Jones, Miles Davis, Ella Fitzgerald, Aretha Franklin and B.B. King also adorn the lawn of the Palace, in remembrance of the music greats who have played the Montreux Jazz Festival since its founding in 1967.

Up the steep cobblestone streets from the lake, the old town drips with Belle Époque style, its 19th-century painted buildings fitted with working window shutters and filigreed wrought-iron balconies. The streets near the top of the town are worth the climb for the views down to the lake and forests below.

Further up the slopes, you can see the terraced Lavaux vineyards. Our tour with a small local wine producer includes lunch, where you can taste traditional cheese fondue or local cheeses and dried meats.

The weather is best for visiting June through early September, when it’s warm and sunny without being muggy. The average temperature stays around 25°C (76°F). The winters don’t get very cold but can drop below freezing at times and see a lot of rain.

The jazz festival makes parts of July a busy time to visit, and August is also crowded with locals visiting during the school holidays.

Our itineraries will give you suggestions for what is possible when you travel in Montreux, and they showcase routes we know work particularly well. Treat them as inspiration, because your trip will be created uniquely by one of our specialists.

We’ve selected a range of accommodation options for when you visit Montreux. Our choices usually come recommended for their character, facilities and service or location. Our specialists always aim to suggest properties that match your preferences.

Our specialists seek out authentic ways to get to know the places that could feature in your trip. These activities reflect some of the experiences they've most enjoyed while visiting Montreux, and which use the best local guides.