The Greeks, Persians, Romans and Ottomans all fought over Istanbul, a city strategically located at the crossroads of continents and at the end of the Silk Road. Today, it is graced with a glut of historic monuments from the Byzantine masterpiece of Hagia Sophia to the glittering Blue Mosque and the opulent Topkapi Palace. Wherever you wander, you’ll be struck by the complexity of its heritage, the vibrancy of its people, and the seamless blend of old and new as shoppers wander between souqs and malls, diners enjoy modern food with ancient roots, and art lovers seek out timeless icons as well as world-class contemporary works.

Things to see and do in Istanbul

Istanbul's Old City, Sultanahmet, is home to the city’s landmark sights. Topkapi Palace, Hagia Sophia and the Blue Mosque are here, as well as the vibrant Grand Bazaar and Spice Bazaar, the Suleymaniye Mosque and the Chora (Kariye) Museum, formerly an ancient church. From the secular to the sacred, it’s a beguiling place to explore with magnificent monuments dating from its thousands of years as a hub of trade, power and culture. Wander the narrow, cobbled streets and bustling bazaars, stop for a break in one of the many tea houses, or venture as far as the Golden Horn waterway to observe local life. 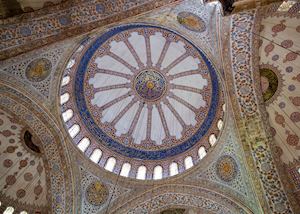 One of the world’s greatest monuments, the 6th-century Hagia Sophia is Istanbul’s best-known landmark and is hailed as the epitome of Byzantine architecture. It sits on the city’s ancient acropolis and was designed to impress. At the time of its construction it was the world’s largest building, consecrated as an Eastern Orthodox cathedral in 537, converted into an imperial mosque in 1453 and designated a museum in 1935. Byzantine emperors were crowned below its soaring dome and the enormous nave, intricate detailing and glittering mosaic work make it just as impressive today.

Six graceful minarets and a cascading blanket of domes give the 17th-century Blue Mosque its graceful form, a dominating element of the Istanbul skyline. Officially known as the Sultanahmet Camii, the mosque is best known for its grand scale and interior decoration where 20,000 blue İznik (decorated ceramic) tiles line the light-filled interior, giving this magnificent monument its unofficial name. The building still functions as a mosque and the huge central prayer space is closed to non-Muslims at prayer times. Approach it from the huge courtyard for the best views and appreciation of its perfect proportions.

The heart of the Ottoman Empire between the 15th and 19th centuries, the Topkapi Palace is a vast and opulent complex of buildings, gardens and courtyards that offers a fascinating glimpse into the lives of the sultans, courtiers and servants who lived here. Along with the private chambers of the sultan and the imperial council chambers, you can see the palace bakery, the 300-room harem, a Byzantine church, the restored palace kitchens, privy chambers and the imperial treasury, all of which are filled with precious objects of the era from robes and weapons to books, manuscripts and furniture.

At the heart of Istanbul’s old city is the Ottoman-era Grand Bazaar, a sprawling, labyrinthine complex of over 4,000 stalls, shops and craft workshops piled high with every spice, fabric, food, clothing and household item imaginable. Wander the narrow laneways flanked by ornate lamps, intricate rugs, pyramids of dried fruit, necklaces and bangles, leather slippers, blankets, textiles and antiques, and you’ll most likely get lost — but it’s all part of the experience. This city within a city also has goldsmiths who can create custom-made items, lots of fresh food stalls, and banks, a post office and even a police station.

Beyond the Old Town

Each of Istanbul’s districts has its own distinct character and exploring beyond the main sights provides a welcome break from the inevitable crowds. Nişantaşi and the area around Istiklal Street are awash with top-end designer stores, art galleries and restaurants. The bohemian area of Çukurcuma is known for its kitsch antique shops, while the narrow alleyways of Karaköy are home to quirky coffee houses and tiny galleries. The Istanbul Modern, on the shores of the Bosphorus, is a haven of contemporary art, and the Sunday market at Ortaköy, almost beneath the Bosphorus Bridge, makes a great alternative to the Grand Bazaar, offering authentic products in a less touristy setting.

Istanbul can be visited year-round; mid-July to mid-September is the most popular time to arrive, but during these months it’s hot and humid, peak prices apply and higher visitor numbers mean longer lines to see the landmark sights. Our top tip is to visit between April and May or mid-September to mid-November when temperatures are more pleasant and there are fewer visitors.

Our itineraries will give you suggestions for what is possible when you travel in Istanbul, and they showcase routes we know work particularly well. Treat them as inspiration, because your trip will be created uniquely by one of our specialists.

Our expert guides to exploring Istanbul

Written by our specialists from their own experiences of visiting Istanbul, these guides will help you make the most of your time there. We share both our practical recommendations and the best ways to appreciate Istanbul at its best.

We’ve selected a range of accommodation options for when you visit Istanbul. Our choices usually come recommended for their character, facilities and service or location. Our specialists always aim to suggest properties that match your preferences.

Our specialists seek out authentic ways to get to know the places that could feature in your trip. These activities reflect some of the experiences they've most enjoyed while visiting Istanbul, and which use the best local guides.