The wide savannah plains of Queen Elizabeth National Park are scattered with candelabra trees and watered by rivers and channels that flow between volcanic lakes. Cradled in a giant rift valley, with the Rwenzori Mountains looming in the distance, the park is a haven for wildlife. 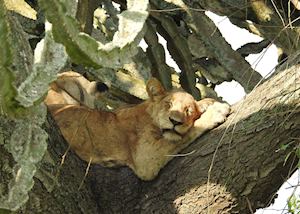 While out on game drives, you might see four of the Big Five (all but rhino), hyena, hippo and several antelope species. There’s also the chance of encountering tree-climbing lion and, in the park’s far-eastern corner, chimpanzees. Some of the best wildlife viewing is done by boat along the Kazinga Channel, passing squacco herons, pied kingfishers, hippo, buffalo, and basking crocodiles.

You might not automatically think of Uganda as a safari destination — usually all eyes are on the country’s fiercely protected mountain gorilla population. But, before or after your gorilla encounter, a few days on safari in Queen Elizabeth National Park gives you the chance to see a wider range of wildlife.

One of the more unusual sightings occurs in the Ishasha region to the south of the park. While on game drives here, your guide will encourage you to scan the fig trees in case you pass any lion up in the branches. It’s not known for sure why they climb trees here: some say it’s a way of cooling down, others that it’s to gain a better vantage point for spotting prey. Or, it might be a way to escape the tsetse flies that often buzz around at ground level.

Morning and afternoon game drives through the park also give you an opportunity to see leopard, hyena, warthog, grazing herds of zebra, and a wide variety of antelope, including the Ugandan kob, bushbuck, reedbuck and topi.

One of the highlights is taking a trip to the Kyambura Gorge, in the far east of the park, to track chimpanzees on foot. Around 20 of them reside here, and while sightings aren’t guaranteed, your guide will know the best places to look. You can usually hear the howls of chimpanzees echoing through the trees before you see them. Once you come across them, you can spend an hour watching them swing from branches, munching on leaves and grooming each other.

The best places to see wildlife in the park are around the lakes, streams and rivers. While you can explore the banks on game drives, morning and afternoon boat safaris give you a closer viewpoint.

As you drift along the Kazinga Channel with a local guide, you might see the eyes and snouts of hippo poking out of the water. Elephant, Ugandan kob, buffalo and zebra often line the banks, quenching their thirst. Crocodiles and water monitor lizards bask on the banks. And, everywhere you look are birds of all shades and sizes (there are more than 600 species in the park), from yellow-billed storks, pelicans and water thick-knees, to fish eagles, African skimmers and plovers. 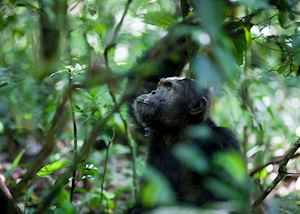 It’s easy to visit Queen Elizabeth National Park before or after tracking mountain gorillas in Bwindi Impenetrable National Park, which is a five-hour drive south. Meanwhile, to the north, the park adjoins Kibale Forest National Park, creating a corridor for wildlife.

Kibale is home to the greatest concentration of primates in East Africa, and is one of the best places for seeing chimpanzees. You can visit one of the five habituated troops on foot with an experienced guide. As you walk, you can also look out for endangered red colobus monkeys, L’Hoest’s monkeys, golden and blue monkeys and grey-cheeked mangabeys.

Wildlife viewing is at its best during the park’s two dry seasons: from January to February and from June to July. For birdwatching, visit between late May and September. Peak gorilla tracking time is between June and September, with the knock-on of much higher visitor numbers. Avoid April, May, August and September as heavy rainfall can interfere with your safari.

Our itineraries will give you suggestions for what is possible when you travel in Queen Elizabeth National Park, and they showcase routes we know work particularly well. Treat them as inspiration, because your trip will be created uniquely by one of our specialists.

We’ve selected a range of accommodation options for when you visit Queen Elizabeth National Park. Our choices usually come recommended for their character, facilities and service or location. Our specialists always aim to suggest properties that match your preferences.

Our specialists seek out authentic ways to get to know the places that could feature in your trip. These activities reflect some of the experiences they've most enjoyed while visiting Queen Elizabeth National Park, and which use the best local guides.