Jinja is the fourth largest town in Uganda and lies about 50 miles east of Kampala on the shores of Lake Victoria.

Jinja lies on one side of the Nile whilst the satellite town of Njeru is situated on the opposite bank. The Ripon Falls which Speke identified as the source of the Nile in 1862 were submerged by the Owen Falls Dam in the 1950s, making the source of the Nile a rather less interesting sight than it once was. However, the lush vegetation around Jinja does give the town a lovely tropical atmosphere. 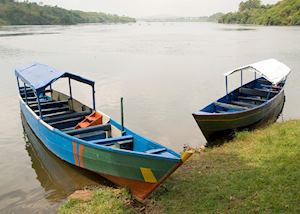 The major attraction in the surrounding area is the River Nile itself and the series of grade five rapids that are becoming increasingly popular for white-water rafting.

Jinja was once the industrial heartland of Uganda but suffered at the hands of Idi Amin’s government, although its fortunes have improved in recent years. There is little of historical note in the compact low-rise town although some interesting Asian architecture from the colonial period can be found.

Our itineraries will give you suggestions for what is possible when you travel in Jinja, and they showcase routes we know work particularly well. Treat them as inspiration, because your trip will be created uniquely by one of our specialists.

We’ve selected a range of accommodation options for when you visit Jinja. Our choices usually come recommended for their character, facilities and service or location. Our specialists always aim to suggest properties that match your preferences.

Our specialists seek out authentic ways to get to know the places that could feature in your trip. These activities reflect some of the experiences they've most enjoyed while visiting Jinja, and which use the best local guides.