Lake Mburo National Park is a small but beautiful park dominated by the eponymous lake.

The lake itself is the largest of five lakes within the park and all are fringed by thick riparian forest and patches of papyrus swamp. Surrounding the lakes are rolling hills and moving away from the lake shores, the forest gives way to a mosaic of open savannah and acacia woodland that once stretched southwards to the Tanzania border and beyond.

Although elephant and lion have not been observed within the park recently, there is still a healthy population of game including numerous topi, bushbuck, oribi, duiker, Defassa waterbuck, buffalo, warthog and hippos in the lakes. Lake Mburo is also home to the only population of impala in Uganda and apart from the remote northern parks, is the only place to see Burchell's zebra and eland in Uganda. 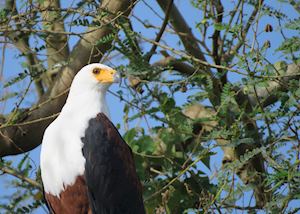 Over 300 species of birds have been recorded within Lake Mburo and it is probably the best place in Uganda for acacia-associated birds. The permanent and seasonal wetland areas that connect the lakes are home to a number of papyrus endemic birds species including the papyrus gonolek, the blue-headed coucal and the white-winged and papyrus yellow warblers.

This sample itinerary will give you an idea of what is possible when you travel in Lake Mburo, and showcases routes we know work particularly well. Treat this as inspiration, because your trip will be created uniquely by one of our specialists.

We’ve selected a range of accommodation options for when you visit Lake Mburo. Our choices usually come recommended for their character, facilities and service or location. Our specialists always aim to suggest properties that match your preferences.