On either side of the River Clyde lies Glasgow, a place as folksy as it is cosmopolitan. Victorian Glasgow was at the forefront of the rise of the steamship, at one time responsible for producing 25% of the world’s ocean liners. But, following the Great Depression, the city began to fall into decline.

After decades on the wane following the disappearance of its major industries, Glasgow experienced a renaissance in the 1980s when businesses began to invest in the city. Now revived, Scotland’s largest city is home to innovative restaurants, flourishing creative industries and venues hosting some of Britain’s best live music. In addition to its offerings, the city is only a 45-minute drive from Loch Lomond and the Trossachs National Park.

Visiting artsy Glasgow feels very different from historic Edinburgh — here, the streets are lined with impressive graffiti artworks, each one telling its own story. I particularly love how easy it is to navigate.

Things to see and do in Glasgow

An exemplar of Gothic architecture, Glasgow Cathedral has been a place of worship for more than 800 years. Its steely-grey stone walls portray a medieval might you won’t see elsewhere in mainland Scotland — this was the only cathedral to survive the Reformation. It also boasts an eclectic collection of window designs, from 19th-century painted glass to a modern series by the Glasgow School of Art graduate John K Clark.

The cathedral stands on the site of a 5th-century church and monastic community set up by Kentigern, a missionary who became one of Glasgow’s founders. He’s now better known as Saint Mungo, the patron saint of Glasgow. You can see his tomb among a forest of pillars in the lower church.

After touring the cathedral, you can cross the Bridge of Sighs over the Molendinar Ravine to the necropolis, Glasgow’s city of the dead. This huge Victorian graveyard holds just over 50,000 burials, set out in neat rows. The gravestones and monuments vary in style from an elaborate Art Nouveau Celtic cross designed by Charles Rennie Mackintosh to an enclosure of simple Jewish headstones (chosen so as not to embarrass families who couldn’t afford better). 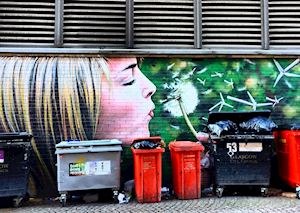 Glasgow’s industrialist past left a legacy of concrete high-rises and Brutalist architecture across the city. In 2014, Glasgow City Council decided to invite the local emerging street artists to transform the cityscape in an innovative (and legal) way. You’ll happen upon a kaleidoscopic spaceman and oversized tigers as you wander the thoroughfares, but we suggest taking a guided tour to see these imaginative works in less obvious settings.

With a local guide, you can explore some of the grittiest areas and hidden corners, to find artworks by street-art veterans as well as emerging artists. Local-born Rogue One is one of the best-known, painting photorealistic murals including a series of hands making shadow puppets on a concrete underpass.

The purpose-built Kelvingrove Art Gallery and Museum first opened the doors of its Spanish-Baroque-inspired building in 1901, and it has been popular with Glaswegians and visitors ever since. The 22 galleries cover everything from fine art to natural history, including a Mark 21 Spitfire with wings that almost graze the walls of the central hall.

The collections hold international importance and include one of the largest gatherings of Flemish Old Masters in the UK, as well as works by Monet, Renoir and Van Gogh. Celebrating home-grown talent are the dedicated Scottish Colourists Gallery and the Glasgow Style Gallery, featuring furniture and fittings designed by Mackintosh in the early 20th century.

A trailblazing UNESCO City of Music, Glasgow has encouraged a range of musical creativity from alternative rockers Primal Scream to pop’s Deacon Blue. The city’s music venues are renowned for their history of epic gigs, including a 1967 performance at Green’s Playhouse that saw Jimi Hendrix cover the current Beatles hit Sgt. Pepper’s Lonely Hearts Club Band (with support from Pink Floyd).

Tucked away to the north of central Glasgow, Merchant City holds many cherished venues. They include Britannia Panopticon, Britain’s oldest surviving music hall, and the revered Barrowland Ballroom, which looks relatively unassuming aside from a huge neon sign. Its sprung floor and low ceiling create acoustics that keep drawing musicians back. We recommend visiting as part of a guided music history tour, where you can hear about the venues’ back catalogue of star appearances, from the likes of Oasis, David Bowie and The Clash.

With a reputation for intimate venues and appreciative crowds, Glasgow’s music scene is still going strong. Almost 2,000 gigs, concerts and performances are held across the city each week.

Glasgow’s five internationally renowned universities have helped the city evolve into the modern, innovate place it is today. The University of Glasgow was founded in 1451, with a focus on law, medicine and teaching. The campus up on Gilmorehill to the northeast of the city is a collection of commanding stone buildings, including terraced townhouses designed by Sir George Gilbert Scott and Lord Kelvin’s House, one of the first homes in the world fitted with electric lighting.

Much of the architecture in central Glasgow is indebted to the presence of the Glasgow School of Art, whose alumni include some of modern history’s most influential designers and architects. Many constructions, including the Mackintosh Building, were designed by Charles Rennie Mackintosh and reflect his interest in Modernist and Japanese design. Take afternoon tea in the Willow Tea Rooms to dine among furniture and interiors the great man designed.

At the opening of the People’s Palace in 1898, Lord Rosebery (a former British Prime Minister) declared the building, ‘open to the people for ever and ever’. Built in the overcrowded east end of Glasgow, the Renaissance-influenced red sandstone building had a reading room, museum and recreation areas for local residents to use as a cultural outlet.

The palace is still very much of the people and now hosts a museum charting the history of Glaswegians from the Tobacco Lords to trade unions. You can tour a reconstructed 1930s single-room house and view outfits sported by stylish couples attending the Barrowland Ballroom in the ’50s. You’ll also see a pair of banana-shaped boots worn by comedian Billy Connolly in the 1970s. At the back of the museum is a tiered Victorian glasshouse filled with tropical plants — and a useful place to shelter from the Scottish weather.

A short walk from the People’s Palace is Templeton on the Green, previously known as the Templeton Carpet Factory. Designed after the Doge’s Palace in Venice with enamelled tiles and circular rose windows, it’s easy to spot against the surrounding Brutalist tower blocks. The decoration on the tiles was designed to evoke the patterns of the carpets the factory produced.

Behind the elaborate façade, James Templeton ran the most successful carpet manufacturer in Britain, making carpets for the Titanic, the White House and the coronation of Queen Elizabeth II. Flats and businesses are now housed behind the terracotta bricks, but if you’d like to see inside you can have a drink in the beer-hall-style bar on the ground floor. It’s owned by WEST, a Scottish brewery also located inside the building.

The weather tends to be best from June to August, when temperatures peak and there’s less rain — and the long daylight hours are ideal for exploring. In September, temperatures start to cool and rainfall increases. Winter arrives mid-November, when temperatures average 5 C (41 F), but skies are often clear. The unpredictability of Scottish weather means you might see all four seasons in one day, so it’s best to be prepared for any eventuality — and none more so than in spring, which can bring hot, balmy days or lingering frosts in April and May.

Our itineraries will give you suggestions for what is possible when you travel in Glasgow, and they showcase routes we know work particularly well. Treat them as inspiration, because your trip will be created uniquely by one of our specialists.

We’ve selected a range of accommodation options for when you visit Glasgow. Our choices usually come recommended for their character, facilities and service or location. Our specialists always aim to suggest properties that match your preferences.

Our specialists seek out authentic ways to get to know the places that could feature in your trip. These activities reflect some of the experiences they've most enjoyed while visiting Glasgow, and which use the best local guides.

Start planning your tailor-made vacation by contacting ​one of our certified Scotland specialists...