Dominated by a lofty castle and renowned for its mixture of high culture and cosmopolitan cool, Edinburgh is Scotland's historic capital. It's graced with fine architecture both in its medieval Old Town and Georgian New Town, a collection of great museums and a host of lively restaurants and bars, yet compact enough for you to explore on foot.

With historic buildings lining the handsome streets, strong connections to a host of literary giants and an internationally renowned festival, it's a cultural heavyweight protected as both a UNESCO World Heritage Site and a City of Literature. Despite its august credentials, the city has a vibrant, youthful character with a reputation for great nightlife and a sophisticated but down-to-earth air.

Edinburgh is my standout highlight in the UK: where else can you see an extinct volcano next door to a characterful yet modern city? I especially love it at night, when the whole place, including the castle, is lit up.

Things to see and do in Edinburgh

Laid out across a series of volcanic outcrops, Edinburgh has something of a split personality with a network of narrow, meandering lanes weaving through the Old Town and grand, neoclassical boulevards traversing the new.

The medieval city is a warren of cobbled streets and alleyways, known as closes and wynds, which are lined with towering tenement buildings, churches and atmospheric vaults.

By contrast, the stately New Town, which grew up in the 18th century on the outskirts of the original city walls, follows an orderly grid pattern. Its wide streets are flanked by harmonious, neoclassical buildings and elegant gardens. Originally a white-collar city of lawyers, bankers and printers, it has retained its gracious air and in 1999 became the seat of the new, devolved Scottish Parliament.

Running the length of Edinburgh's medieval city, the Royal Mile is the main thoroughfare in the Old Town. The mile-long, cobbled street leads steeply upward from the Palace of Holyroodhouse to Castle Rock and Edinburgh Castle.

Many of the city's main sights are clustered around the street, which remains decidedly medieval in appearance. Seventeenth-century merchant houses and civic buildings line its length, along with churches including Edinburgh’s High Kirk (church), and Saint Giles' Cathedral, which you can identify by its crown steeple. Possibly more interesting is the network of closes and wynds (alleyways) leading off the main street to tenement buildings, historic houses and independent shops and bars. 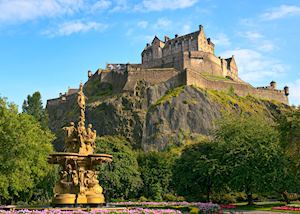 A fort has been present on Edinburgh's volcanic Castle Rock since the Dark Ages. Visible from all over the city, Edinburgh Castle dominates the skyline from its lofty position, a strategic setting exploited since the 12th century when the first castle was built here by King Malcolm Canmore.

Most of what you can see today dates from between the 15th and 17th centuries, the castle having been attacked and rebuilt on numerous occasions. Inside, you can explore Edinburgh's oldest surviving building, the tiny 12th-century Saint Margaret's Chapel, as well as the 15th-century Great Hall with its wonderful hammer-beam ceiling. Climbing up on the battlements rewards you with views over the New Town and the Firth of Forth.

Another dominant feature on the Edinburgh cityscape, Arthur's Seat is a rocky outcrop that rises distinctively to the east of the city. This 251 m (823 ft) peak is the remains of a long-extinct volcano and provides a peaceful place to hike.

It takes about 45 minutes to reach the summit from Holyroodhouse, a vantage point from where you're rewarded with panoramic views over the surrounding area as well as the streets below.

Once home of Mary, Queen of Scots and now the royal family's official residence in Scotland, the Palace of Holyroodhouse (commonly known as Holyrood Palace) is an elaborate 17th-century building laid out by King Charles II.

Within the palace, you can see a number of ornate royal apartments and the enormous Great Gallery, which contains portraits of 96 Scottish kings, before venturing up a tight spiral staircase in the oldest part of the building to Mary's Bedchamber.

Next to the palace are the atmospheric ruins of Holyrood Abbey, which was commissioned in 1128 by King David I. Just to the south is Holyrood Park, an extensive area of open hillside incorporating Arthur's Seat and the ruins of 15th-century Saint Anthony's Chapel.

Edinburgh’s unusual geography is the product of early volcanic activity followed by prolonged periods of glaciation. The city's buildings rise like flights of steps over basalt outcrops, which provided strategic viewpoints and natural defensive positions for early settlers.

Edinburgh's seven hills, like those of Rome, provide a geographic character that has heavily influenced the personality of the city. One of the seven, Calton Hill lies at the eastern end of Princes Street, Edinburgh's main shopping area. It’s surrounded by grand Georgian terraces and topped with a number of follies and monuments that make it a magnet for walkers.

Most obvious is the Scottish National Monument, a colossal but uncompleted memorial to soldiers lost in the Napoleonic Wars that is modeled on the Parthenon. Nearby the City Observatory and the more modest Dugald Stewart Monument, which commemorates the Scottish philosopher, were built in a similar style.

First held in 1947, the Edinburgh International Festival is one of the oldest and largest arts festivals in the world. That year, eight groups didn’t get a place on the original line-up and began their own Festival Fringe, which has continued ever since.

Between them, these two festivals turn every stage, pub and communal hall into a performance venue for three weeks each August. Musicians, buskers, comedians, dancers and punters spill out onto the streets in a celebration of the arts that grips the whole city in a good-natured frenzy.

Alongside it all runs the Royal Edinburgh Military Tattoo, which sees performers from 48 countries provide ceremonial entertainment against a backdrop of Edinburgh Castle for the duration of the month.

Our itineraries will give you suggestions for what is possible when you travel in Edinburgh, and they showcase routes we know work particularly well. Treat them as inspiration, because your trip will be created uniquely by one of our specialists.

We’ve selected a range of accommodation options for when you visit Edinburgh. Our choices usually come recommended for their character, facilities and service or location. Our specialists always aim to suggest properties that match your preferences.

Our specialists seek out authentic ways to get to know the places that could feature in your trip. These activities reflect some of the experiences they've most enjoyed while visiting Edinburgh, and which use the best local guides.