Rain is a frequent visitor but it’s often when the drizzle clears and the sun's rays pierce the clouds that you're rewarded with the best views of all. You'll also be spoiled with seafood, local whisky and the genuine warmth of the people here.

Skye’s restfulness is a major draw, but you’ll get more out of the isle if you’re prepared for its unpredictable weather patterns. There’s a pay-off, though: the most rainbows I’ve ever seen in any one place in all my travels.

Things to see and do on the Isle of Skye

A land of snow-blanketed ridges, dramatic rock formations and glassy black-water lochs, the Isle of Skye is a striking destination. Thanks to the frequent rain, its landscape remains vibrantly green throughout the year, though it varies greatly in its 80 km (50 mile) length.

Most famous of all Skye's hills are the formidable Cuillin Mountains, known as the most scenic and challenging in Britain. Jagged, rocky peaks, steep valleys and sheer cliffs make them a haven for climbers and mountaineers. In other places these mighty hills give way to headlands, coral beaches and wide sandy shores and are carved by waterfalls.

In the far north of the island the landscape is marked by an enormous ancient landslip that runs almost the entire length of the Trotternish Peninsula. Here you'll find some of Skye's most identifiable landmarks, a series of rock formations that are some of the island's most photographed locations.

The spiked rock pinnacles, cliffs and buttresses of the Old Man of Storr and the Quiraing provide great hill walking with uninterrupted panoramas. At Kilt Rock, further up the peninsula’s west coast, an immense, pleated cliffside of vertical basalt columns plunges steeply into the sea.

Skye's otherworldly landscapes have made it a popular place to shoot films over the years. Its forbidding mountains and verdant glens have acted as both real-world and fantasy cinematic backdrops.

The weirdly shaped rock pinnacles of the Quiraing and the Storr are the island's most frequently featured locations, starring in the BFG (2016), Macbeth (2015) and Stardust (2007).

The arresting Old Man of Storr rising from the mists provides an intriguing backdrop in Prometheus (2012) and The Wicker Man (1973), while the Cuillin range made it into Highlander (1986). The Fairy Glen was also featured in Stardust. 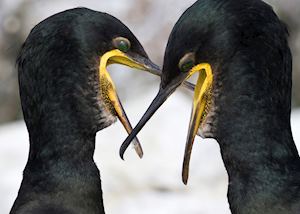 Skye's diverse and extreme landscapes make it an ideal habitat for wildlife. The sea eagle and golden eagle, two of Britain's largest birds of prey, are frequently sighted around the island's cliffs, particularly around Portree.

Red deer roam the highlands in summer, growing impressive antlers ready for the autumn rut. In winter they can be seen grazing on lower ground. Sit by the coast for a while or take a kayaking trip, and you're likely to spot sea otters, seals, and bottlenose and common dolphins. If you're lucky, you may even see minke whales, although your chances of seeing these leviathans are higher if you take a boat trip.

In recent years the Isle of Skye has emerged as a site of huge paleontological significance. It’s one of only a few places on Earth where fossil-bearing rocks from the mid-Jurassic period have been found.

The discovery of dinosaur footprints, bones and teeth have helped to re-evaluate thinking about this little-understood period, while the remains of Jurassic turtles have proved pivotal in the understanding of the evolution of sea and land animals.

Most of the island's fossils have been found on the Trotternish Peninsula. Progress is slow as the fossils are hidden in cliffs capped by volcanic rocks and frequently lashed by the sea.

Fleeing in the wake of the disastrous Battle of Culloden, Bonnie Prince Charlie took refuge on Benbecula in the Outer Hebrides. However, the island was ruled by a local militia commanded by Hugh MacDonald and was far from safe.

Hugh's step-daughter Flora, however, was sympathetic to the Jacobite cause. She used her position to help Bonnie Prince Charlie evade capture, bringing him by boat to Skye disguised as Flora's maid Betty.

The prince made it from Skye to France but poor Flora was arrested and imprisoned in the Tower of London. Their adventure is recorded for posterity in the traditional folk tune, the Skye Boat Song.

Salmon fishing is a popular pastime on Skye and the River Snizort is the premier location for bagging a catch. A short, fast-flowing spate river fed by the rain, you'll find Atlantic salmon here year round, though the biggest runs are from the end of June to October.

Wild brown trout can also be caught here, though you'll need a permit to fish on the river. A local ghillie (guide) can go a long way to improving your chances of a good catch. A ghillie can also offer fly-fishing lessons and take you to hidden hill lochs, shore fishing spots or to lesser-known places such as the pool at the foot of the Lealt Gorge which sits beneath a waterfall.

Set on the edge of a lake and surrounded by dense woodland, Dunvegan is the oldest continually inhabited castle in Scotland, home to the chiefs of the McLeod clan for 800 years. The castle was originally built in the 13th century but has been extensively restored and extended since, most recently in the Romantic style in the mid-19th century. It’s surrounded by vast and meticulously kept gardens and has its own seal colony on the loch. Inside, it’s grand but comfortable and full of family heirlooms. 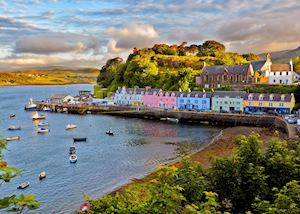 Set around a natural anchoring point in a coastline marked by cliffs and high ground, the town of Portree is Skye's main commercial hub. The busy port is home to fishing boats and pleasure craft, and the town makes a good place from which to take a cruise.

A terrace of pastel houses flanks the waterside, while the lively streets offer the island's best selection of accommodation, pubs and restaurants.

One of the town's most interesting attractions is Aros, a cultural hub that offers regular exhibitions and live music and has a display on St. Kilda, Britain's most far-flung island.

This little coastal village with dramatic views of the Cuillin range is home to the historic Talisker Distillery, founded in 1830. The sweet, peaty single malt is popular all over the world and was much loved by writer Robert Louis Stevenson who even mentioned it in his poem The Scotsman's Return from Abroad.

The distillery still uses traditional techniques using stills with 'worm tubs' rather than modern technology to condense the alcohol. This allegedly leads to a more full-bodied spirit. You can tour the distillery to learn about this age-old practice and see the production of the whisky in process. 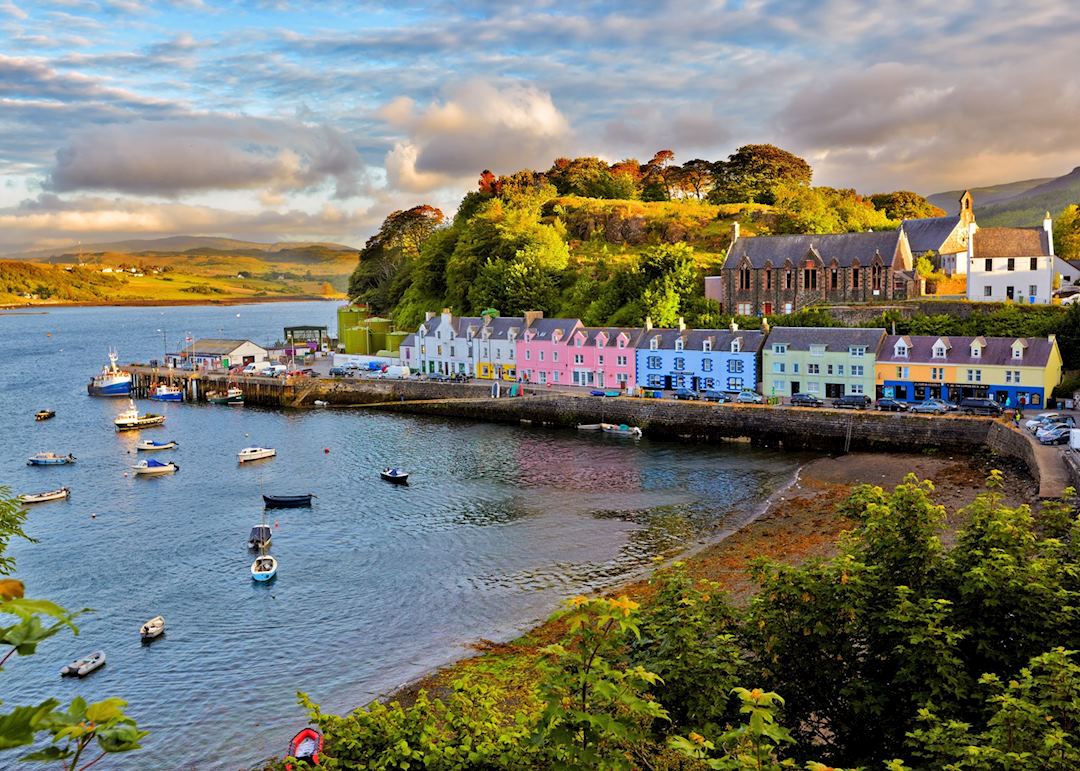 Start planning your trip to Isle of Skye

Request a Quote
Map view Places near Isle of Skye

Map of Isle of Skye

Places near Isle of Skye

Photos of Isle of Skye

Accommodation choices for Isle of Skye

We’ve selected a range of accommodation options for when you visit Isle of Skye. Our choices usually come recommended for their character, facilities and service or location. Our specialists always aim to suggest properties that match your preferences.

Ideas for experiencing Isle of Skye

Our specialists seek out authentic ways to get to know the places that could feature in your trip. These activities reflect some of the experiences they've most enjoyed while visiting Isle of Skye, and which use the best local guides.