Fulfilling every romantic notion you have ever had about England, the Cotswolds, a swathe of lush rolling hills peppered with achingly pretty villages, is a region nearly untouched by the passage of time.

The area grew wealthy on the back of the medieval wool trade and was then largely bypassed by the Industrial Revolution, leaving the grandeur of its stone cottages, churches and stately mansions undisturbed.

It's an incredibly picturesque region and its most popular towns are thronged with tea rooms, antique shops, crafts stalls, and visitors. Despite this, the Cotswolds remains a place where you can head out on a solitary country walk, strolling through quiet villages and passing tucked-away rows of old workers’ houses fronted by cottage gardens.

The Cotswolds are like every cliché from a children’s storybook come true: honey-stone cottages festooned in wisteria, pocket-square gardens, and winding, tiny roads that seem to lead to nowhere. They’re everything you imagined the English countryside would be — but better.

Things to see and do in the Cotswolds

The Cotswolds is made up of a band of Jurassic limestone that provides the warm, honeyed stone seen in its villages, as well as the grassland that fed the sheep which brought such wealth to the region in the Middle Ages. The flat layers of quarried Cotswold stone proved ideal for building dry stone walls, and they form the boundaries to most gardens and fields you’ll see.

It's an extremely attractive pocket of England, with waves of hills creating sheltered dips that swaddle small villages and rocky outcrops that provide sweeping views across the rolling countryside. Numerous walking trails, many of which follow old sheep driving routes, cross the hills offering a fantastic way to avoid the crowds, discover bucolic views and soak up the languid charm of hidden villages. 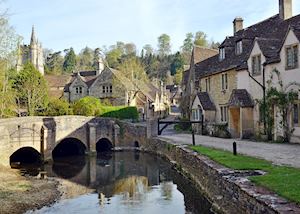 Everywhere you go across the Cotswolds, you'll encounter incredibly pretty villages where stone- or thatch-roofed cottages, higgledy-piggledy almshouses and graceful old manor houses and churches line narrow, winding streets. In many, streams crossed by low stone bridges run alongside the streets, roses clamber gaily over doorways and the village pub is the seat of the community.

Places like Burford and Bourton-on-the-Water are undeniably beautiful but can get overrun with visitors. Others, like Lower Slaughter and Chipping Campden, offer a more genuine charm. In reality though, every village you visit is a pretty one.

In the Middle Ages, the Cotswolds became renowned as the source of the finest wool in Europe. The local sheep, a breed introduced by the Romans, thrived on the rare grassland in the hills. At the time, half of England's economy relied on the wool trade, and as the merchants grew rich they built grand manors and churches.

Even the industrial buildings were picturesque, as seen in Arlington Row in Bibury. A terrace of stone cottages with low eaves and a roofline sagging through age, it was once a wool-processing factory. The Cotswolds remains a largely agricultural area and is home to the Royal Agricultural University in Cirencester, which educates the next generation of gentlemen farmers, and Highgrove, Prince Charles' private estate.

Fleeces from Cotswold sheep held enormous economic value in the Middle Ages, and the wool merchants became fabulously wealthy over a short period of time. The merchants frequently invested part of their fortune in their parish churches, and the Cotswold 'wool churches' are replete with towering spires, ornate tombs, monumental brasses, elaborately carved rood screens and vivid wall paintings.

One of our top recommendations is the magnificent Saint James Church in Chipping Campden, though even in the smallest Cotswold hamlet you’ll find a church worth stopping to admire for its stone carving or stained glass.

Although the importance of sheep farming in the Cotswolds has dwindled since its heyday, the area remains prosperous with many affluent London commuters and wealthy locals fuelling an interest in organic and artisan produce.

Food festivals, farmers’ markets and craft producers abound, and it's possible to buy a vast array of local cheeses, organic meats, honey and ale. Sophisticated restaurants serve refined modern British dishes made from local produce, you can visit small breweries in Witney and Hook Norton, or you can simply relax in one of the ubiquitous traditional pubs. These timeless drinking holes generally have low beams, roaring fires, local craft beers and often serve anything from simple British fare to haute cuisine.

This sample itinerary will give you an idea of what is possible when you travel in the Cotswolds, and showcases routes we know work particularly well. Treat this as inspiration, because your trip will be created uniquely by one of our specialists.

Map view Places near the Cotswolds

Map of the Cotswolds

Places near the Cotswolds

Photos of the Cotswolds

Accommodation choices for the Cotswolds

We’ve selected a range of accommodation options for when you visit the Cotswolds. Our choices usually come recommended for their character, facilities and service or location. Our specialists always aim to suggest properties that match your preferences.

Ideas for experiencing the Cotswolds

Our specialists seek out authentic ways to get to know the places that could feature in your trip. These activities reflect some of the experiences they've most enjoyed while visiting the Cotswolds, and which use the best local guides.