One of England's most beautiful cities with some of Britain's most magnificent architecture, Bath has a genteel air and a distinguished charm. It’s home to one of the country's only hot springs, a fact the Romans exploited when they built a spa complex here in 44 AD. Then, in the 18th century, the cream of English society flocked here to 'take the cure' in the thermal waters, and glorious Georgian terraces and crescents were constructed to accommodate them.

There are wonderfully preserved Roman baths to discover, an impressive medieval abbey church, a host of museums and, everywhere you go, picturesque streets that tempt you to continue exploring.

Home to some of the best-preserved Roman ruins you’ll ever see, the city’s showpiece never disappoints me. Bath itself is all Georgian elegance, and if you’re going to indulge in afternoon tea, this is the place to do it.

Things to see and do in Bath

Bath was in serious decline in 1703 when Queen Anne came to visit and unwittingly brought the city to popular attention once again. Soon Bath became the most fashionable haunt of the rich and famous, and grand terraces of beautifully proportioned townhouses sprang up. New social hubs such as the Pump Room and Assembly Rooms were constructed, and Pulteney Bridge, exceptional for its double row of shops, was built over the river.

Most notable of all, though, was the Royal Crescent, a sweeping terrace of 30 houses overlooking Royal Victoria Park and the river valley. It became home to Britain's most affluent socialites, and it remains the city's most prestigious address. Within compare is the Circus, three nearby crescents of houses laid out in a tight circle with delicate balconies and columns and a classical frieze of 525 insignia that continues around each building. 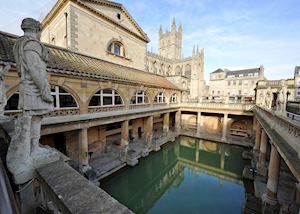 Although Bath’s hot springs had been known since Celtic times, it was the Romans who established a settlement, called Aquae Sulis, and baths there after they arrived in the first century AD. They constructed a temple to Minerva, the goddess of wisdom, and, over the course of 300 years, developed an elaborate series of bath houses that eventually challenged any in Western Europe.

Aquae Sulis was a place of recreation, and the waters were known for their curative properties, so it’s likely to have been visited by emperors and noblemen. The city flourished until about 577 AD, when the Saxons defeated the Romans. They lost control of Bath, as well as much of southwest England, and their beloved hot baths fell into disrepair, eventually silting up.

The baths are some of the best preserved in Britain and are a vivid reminder of just how sophisticated Roman life was. The open-air Great Bath is most impressive, steaming on a cold day and surrounded by its original steps and paving. Water still bubbles from the original source, the Sacred Spring, which is protected under the 12th-century King's Bath.

The adjacent Circular Bath was for cooling down, while the Temple Precinct and museum contain the original altar and finds from the site. Arcading outside allowed bathers to walk between the main springs and the Hot Bath and Cross Bath, now part of the modern Thermae Bath Spa.

Jane Austen moved to Bath with her family in 1801 and it had a significant effect on her work. The city's position as one of Britain's most fashionable social resorts and her experiences as an independent-minded but unmarried woman wound their way into several of her books.

She set Persuasion and Northanger Abbey in Bath, and the characters in both books offer insightful social commentary most likely based on the encounters she had or overheard at the many balls, concerts and polite afternoon teas that were part and parcel of life in the city at the time. The Jane Austen Centre, which occupies a Georgian townhouse in central Bath, sheds light on her connections with the city and how living here influenced her work.

Bath as a base for visiting Stonehenge and Avebury

Bath is well placed for exploring some nearby archaeological sites, with Stonehenge or Avebury easy to visit within a day. Stonehenge is Britain's foremost prehistoric site, its ring of colossal standing stones still exuding mystery after 5,000 years. Although its original purpose is much debated, it was obviously of great importance as the massive stones used to construct it were dragged 402 km (250 miles) from South Wales.

Perhaps more atmospheric is Avebury, another stone circle, bigger and older than Stonehenge and much less busy. You can walk freely among the monoliths, which enclose an entire village. Avebury’s stones are spaced much wider than Stonehenge’s, an irregular assortment of shapes and sizes without lintels to connect them. They had long been toppled until, in the 1930s, Scottish archaeologist Alexander Keiller (who was funded by a family fortune made in the marmalade business) re-erected them. His story and work at Avebury, along with many of his finds, are chronicled in the Alexander Keiller Museum in the village.

Gateway to the Cotswolds 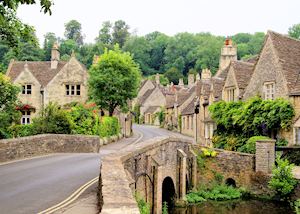 Sitting on the western edge of the Cotswolds, Bath makes a good base for exploring the rolling countryside and implausibly pretty villages of the area.

Cotswold villages are typically small groups of honey-stone cottages with the local pub and church as focal points. The River Thames starts in the Cotswolds, and the landscape is defined by the rivers, such as the evocatively named Windrush and Everlode, that feed into it. Many villages have water running through them, babbling under low stone bridges.

The Cotswolds is the romantic version of the English countryside that many visitors dream of. While it can feel a little manufactured at times, strong communities keep this bucolic idyll rooted.

Our itineraries will give you suggestions for what is possible when you travel in Bath, and they showcase routes we know work particularly well. Treat them as inspiration, because your trip will be created uniquely by one of our specialists.

We’ve selected a range of accommodation options for when you visit Bath. Our choices usually come recommended for their character, facilities and service or location. Our specialists always aim to suggest properties that match your preferences.

Our specialists seek out authentic ways to get to know the places that could feature in your trip. These activities reflect some of the experiences they've most enjoyed while visiting Bath, and which use the best local guides.