Nantucket is a delightful little island with a rich seafaring history. Its main town, also called Nantucket, has many striking examples of 18th and 19th-century architecture, much of which is covered in cedar shingles. 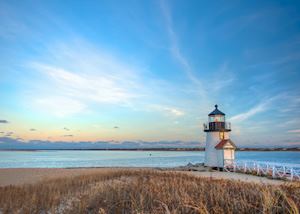 Originally a booming whaling port, it has changed little since the 17th century, when many of the seaside cottages were built and whale oil lamps lit the streets. As a result, the entire town of Nantucket is an official National Historic District and has more than 800 pre-Civil War buildings contained within one square mile.

The town's main sights are the Whaling Museum and the neighboring Peter Foulger Museum, while at the Quaker Meeting House lectures are given on the history of whaling and the tragedy of the Nantucket whale ship Essex. It was this vessel which inspired Herman Melville to write Moby Dick.

From Nantucket town bicycles can be hired for the seven-mile ride to the village of Siasconset. You can explore the venerable old salt-encrusted cottages here before riding back across the island's heaths and moorland.

This sample itinerary will give you an idea of what is possible when you travel in Nantucket, and showcases routes we know work particularly well. Treat this as inspiration, because your trip will be created uniquely by one of our specialists.