Portland’s name was decided over the toss of a coin in 1845. Its mellow, happy-go-lucky nature continues to this day in its plentiful parks and gardens, forest and riverside cycle trails, hundreds of food carts, and a growing rabble of pubs and microbreweries.

Walking and cycling tours open your eyes to Portland’s history, unusual traits and public art. It’s also easy to explore independently, whether you’d like to stroll in the Japanese Garden, hike in the nearby Forest Park or browse the waterfront market. 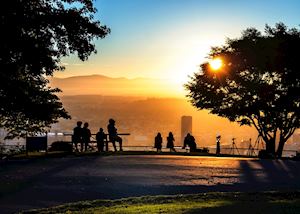 Set on the Willamette River and backed by the brooding Mount Hood, Portland excels at balancing urban life with outdoor pursuits. Dappled with parks, the city is best explored on foot or by bicycle.

We recommend joining a two-and-a-half-hour guided walk to get your bearings and uncover the city’s history and personality. Your local guide will tell you the story of early and modern Portland as you walk in-between the sights.

You’ll see the Portland Penny — the coin that decided the city’s name, now displayed in the Oregon Historical Society — as well as more than 30 pieces of public art, statues, fountains and parks. By the end, you’ll have an understanding of Portland’s art scene, its European-style city planning and its reputation for coffee and beer.

The tour ends at the waterfront. Here, on Saturdays, you can browse the weekend market. Stalls trade in arts and crafts, food kiosks cook up fresh dishes and street performers entertain the crowds.

The best way to sample Pacific Northwest dishes, though, is fresh from some of the city’s food carts. Portland was one of the first places in the US to introduce the concept, and in recent years more than 600 have popped up in the streets.

We can arrange for you to join a three-hour, 8 km (5 mile) guided bicycle tour that focuses on visiting some of the best food carts in Portland. The tour covers the waterfront as well as the Sunnyside and Hawthorne districts.

Highlights include visiting the city’s first-established ‘pod’ of food carts, sampling offerings such as waffles, crêpes, fried potatoes and freshly brewed coffee. Your guide will tell you about what sparked the food-cart craze, as well as its rapid growth here and elsewhere in the country.

Exploring independently, you can admire the Victorian architecture in Old Town, where Portland was founded in 1843.

Downtown, you could pay a visit to the Portland Art Museum and its outdoor sculpture court. Founded in 1892, its collection includes artworks from across North America, Asia and Europe, modern and contemporary pieces, and photography.

Staying in the heart of the city, you could also pay a visit to the world’s largest independent bookstore, Powell’s Books, which houses more than one million books. 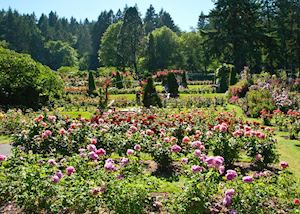 Portland is a leafy city, whose many parks and gardens provide welcome green space. Downtown, the Lan Su Chinese Garden’s covered walkways, bridges and pavilions are styled around examples from the Ming dynasty. And, the riverside Tom McCall Waterfront Park is a popular haunt of joggers and inline skaters, and hosts the Oregon Brewers Festival each July.

We recommend spending an afternoon strolling the pathways of Washington Park, in the west of Portland. The park is home to the Portland Japanese Garden, where you can walk among cherry trees, koi ponds and sand gardens. Free guided tours take place here each day, if you’d like to see the garden through the eyes of an expert.

Also within the park is the Hoyt Arboretum and the International Rose Test Garden. In the former, you can walk along the 19 km (12 miles) of trails that wind among more than 6,000 species of native and exotic plants and trees. Meanwhile, the latter has an intoxicating mix of 500 rose varieties, which bloom between April and September.

North of Washington Park is the wilder Forest Park, where hiking and mountain biking trails lead through temperate rainforest. Within the park is the Pittock Mansion, a grand house built in 1914 by Oregonian newspaper tycoon Henry Pittock. You can picnic in the mansion’s grounds while taking in views over the city, the snowy peak of Mount Hood looming in the distance.

Venturing farther afield, a six-hour guided tour will introduce you to the Columbia River Gorge National Scenic Area, northeast of the city.

Winding along the Columbia River Highway, you’ll stop for short interpretive walks to some of the 70 waterfalls that spill over the gorge’s steep basalt cliffs. One — Multnomah Falls — is one of the tallest perennial waterfalls in the US.

You’ll hear from your guide about the gorge’s formation and the wildlife that thrives here, which includes bald eagles and ospreys.

Afterwards, you have a chance to visit two boutique wineries around the Hood River. Here, you can taste some of Oregon’s finest wines, alongside a plate of local produce.

We recommend visiting Portland between April and October, when you’ll experience mild temperatures, and the parks and gardens look their best. Winter sees a lot more rain and occasional snow. 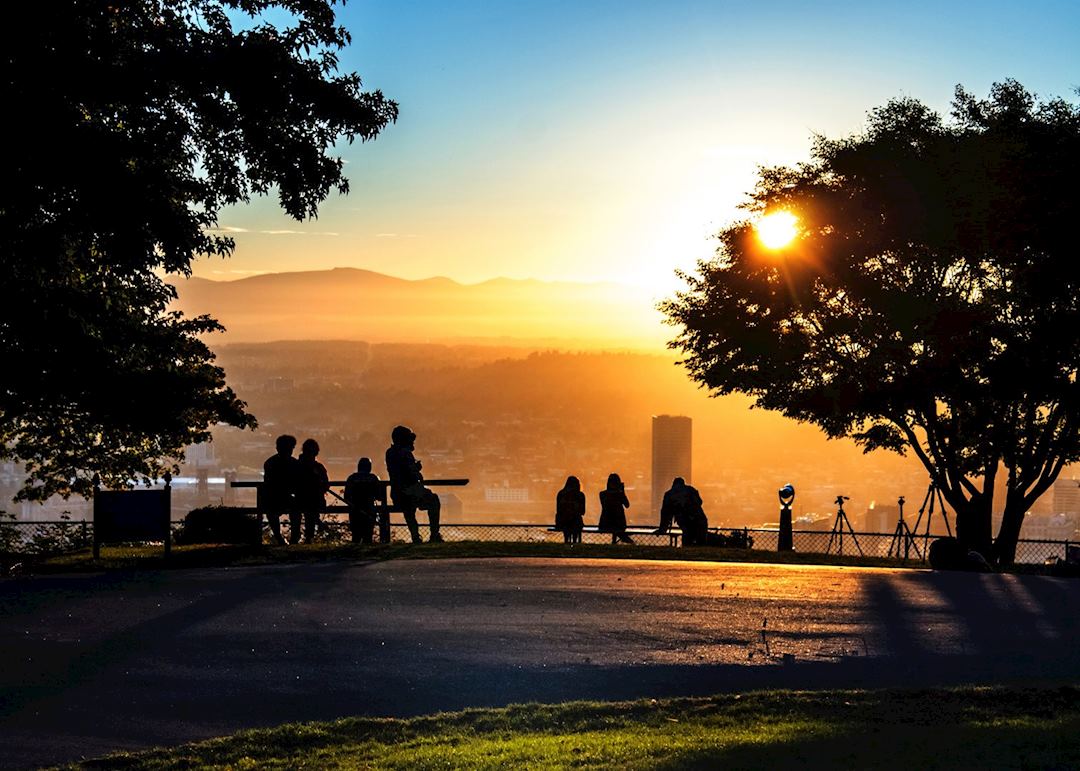 Start planning your trip to Portland

We’ve selected a range of accommodation options for when you visit Portland. Our choices usually come recommended for their character, facilities and service or location. Our specialists always aim to suggest properties that match your preferences.