As you arrive into Phong Nha-Ke Bang National Park, it looks like Mother Nature has poured a giant bucket of greenery across the landscape. Through the tumbling foliage, you’ll see the occasional sheer limestone wall or dark chasm that gives an inkling into the cavernous formations beneath.

The park is located in the western Bo Trach district of Vietnam, close to Laos. It was designated a UNESCO World Heritage Site in 2003. Nestled between the northern and central Annamite Mountains, it sits in one of the largest areas of contiguous limestone karsts in Asia, which also includes Hin Namno National Protected Area in Laos.

The topography here is branded by precipitous karst ridges, which rise to elevations of about 400 m (1,312 ft). Among these are narrow valleys, pockets of igneous rock formations and, perhaps most impressively, hundreds of cave systems.

The caves, although long known to the Ban Doong minority tribe who still live in the park, have only been explored properly since the early 1990s. It quickly dawned on experts from the British Caving Association that the entire region was riddled with cave systems, more than 300 in fact. To date, only a tiny proportion have been mapped. 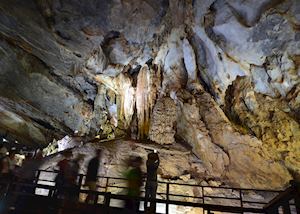 Paradise Cave — named by the group of Yorkshire cavers who discovered it — is, at 31 km (19 miles), the longest. Its series of stalagmites and stalactites make it look like an unearthly cathedral. The first 1 km (0.6 miles) is illuminated and open to the public, accessible via a series of wooden staircases and walkways.

You can only reach nearby Phong Nha Cave by boat, cruising past grazing buffalo and paddy fields before entering the narrow cave mouth. The boat engine will then be cut and you’ll gently float through a series of illuminated caverns.

The more accessible caves can get quite busy, so if you have the time, and an intrepid streak, we highly recommend joining a small group trek farther into the park. On a two-day experience, trekking in pristine jungle and wading through rivers, you’ll reach Hang En Cave. This cavern currently stands as the third largest in the world and governs its own microclimate.

The highlight of the expedition is your bed for the night: in a tent in the cave itself. A campsite is set up on the cave’s own beach, which shelves into an emerald pool. Natural light filters through the cave entrance high above, and you fall asleep to the chirp of thousands of nesting swallows (Hang En translates as Swallows’ Cave).

If that’s still not quite enough, you can spend four days bobbing through underground rivers and camping in the jungle to visit Hang Tien Cave. Or, if you can secure one of the sought-after spaces, and prove you’re fit enough, trek to Son Doong Cave, the largest in the world.

Phong Nha-Ke Bang National Park isn’t just for adventure-seekers. Above ground, you can while away an afternoon at a riverside restaurant, taking a dip to cool off or hire a kayak. Places to stay here are simple but comfortable. At community-run Chay Lap Farmstay, you can laze by a pool that’s overlooked by the limestone karsts of the national park.

April to August tend to be the driest months, exhibiting a tropical, hot and humid climate. Temperatures can reach 40°C (104°F) in July and August. December to March are typically cooler and less humid, although it can be chilly in the evenings (especially if you’re camping). We’d avoid the rainy season, from September to early December, when many of the caves are closed due to flooding.

Our itineraries will give you suggestions for what is possible when you travel in Phong Nha-Ke Bang National Park, and they showcase routes we know work particularly well. Treat them as inspiration, because your trip will be created uniquely by one of our specialists.

We’ve selected a range of accommodation options for when you visit Phong Nha-Ke Bang National Park. Our choices usually come recommended for their character, facilities and service or location. Our specialists always aim to suggest properties that match your preferences.

Our specialists seek out authentic ways to get to know the places that could feature in your trip. These activities reflect some of the experiences they've most enjoyed while visiting Phong Nha-Ke Bang National Park, and which use the best local guides.