There’s so much to do in Hoi An: wander through the Old Quarter, see the Merchant's Houses, enjoy the local market and its street food (try Lao Cau and White Rose Dumpling), get some tailoring done, visit the art quarter, visit the My Son ruins out of town — the list is endless. 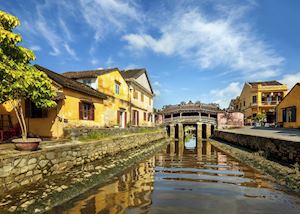 You enter the Japanese sector across a covered bridge: one of the few built outside Japan. Inside is a small temple to the Taoist god of weather, Tran Vo Bac De, an important figure to visiting sailors and merchants. There are a number of museums and homes open to visit, or you can simply enjoy ‘white roses’ (prawn dumplings) in one of the local cafés.

Map view Places near Hoi An