Teton Village is a small settlement ideally situated close to the edge of the southwestern boundary of Grand Teton National Park. A good selection of shops and restaurants, along with outdoor adventure activities including horse riding and swimming, make it an interesting base from which to explore. 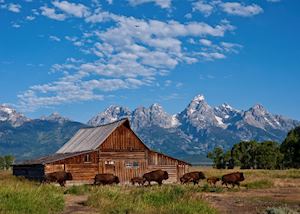 Grand Teton National Park stretches for 50 miles from Yellowstone National Park down to Jackson. Although not one of the largest, Grant Teton is one of America's most spectacular and scenic national parks and features towering peaks and sheer cliffs that rise 7,000 feet above the valley floor. A string of sparkling lakes lie at the foot of the mountains and wildlife proliferates here, with moose, elk, pronghorn antelope and bison frequently sighted. Adjoining the park is the National Elk Refuge, home to the world's largest wintering concentration of elk.

The Shoshone people called these mountains Teewinot meaning many pinnacles but the present name, meaning "large breast" was bestowed by French-Canadian trappers in the 1830s. No roads cross the Tetons but those running along their eastern flank provide stunning views at every turn with Jenny Lake and Grand Teton and Signal Mountains providing outstanding photo opportunities.

There are some glorious walking trails through the park, most notably those around vertiginous Mount Moran and Hidden Falls, while longer trails at Cascade Canyon, Lake Solitude and Lupine Meadows are equally spectacular.

Our itineraries will give you suggestions for what is possible when you travel in Teton Village — Grand Teton National Park, and they showcase routes we know work particularly well. Treat them as inspiration, because your trip will be created uniquely by one of our specialists.

We’ve selected a range of accommodation options for when you visit Teton Village — Grand Teton National Park. Our choices usually come recommended for their character, facilities and service or location. Our specialists always aim to suggest properties that match your preferences.

Our specialists seek out authentic ways to get to know the places that could feature in your trip. These activities reflect some of the experiences they've most enjoyed while visiting Teton Village — Grand Teton National Park, and which use the best local guides.