For the second year running we’ve teamed up with The Sunday Times to find your best travel photographs. A couple of months in and we are already really impressed with the standard of entries. Here are our first six winning photographs and the stories behind them.

'This picture was taken at Wat Phan Tao, Chiang Mai in Thailand during the Loi Krathong festival. Visitors witness the ceremony behind a rope around forty metres from the novice monks chanting while surrounded by hundreds of candles and lanterns. We waited patiently and as many people left I managed to get to the front.

Once the second part of the ceremony was over, we were able to get only ten metres away. It was here that I captured this shot. With my lens at the maximum 85mm focal length it was tricky to achieve a good shot without a tripod in the low light conditions. I’ve learnt that patience is key to a great photograph.' 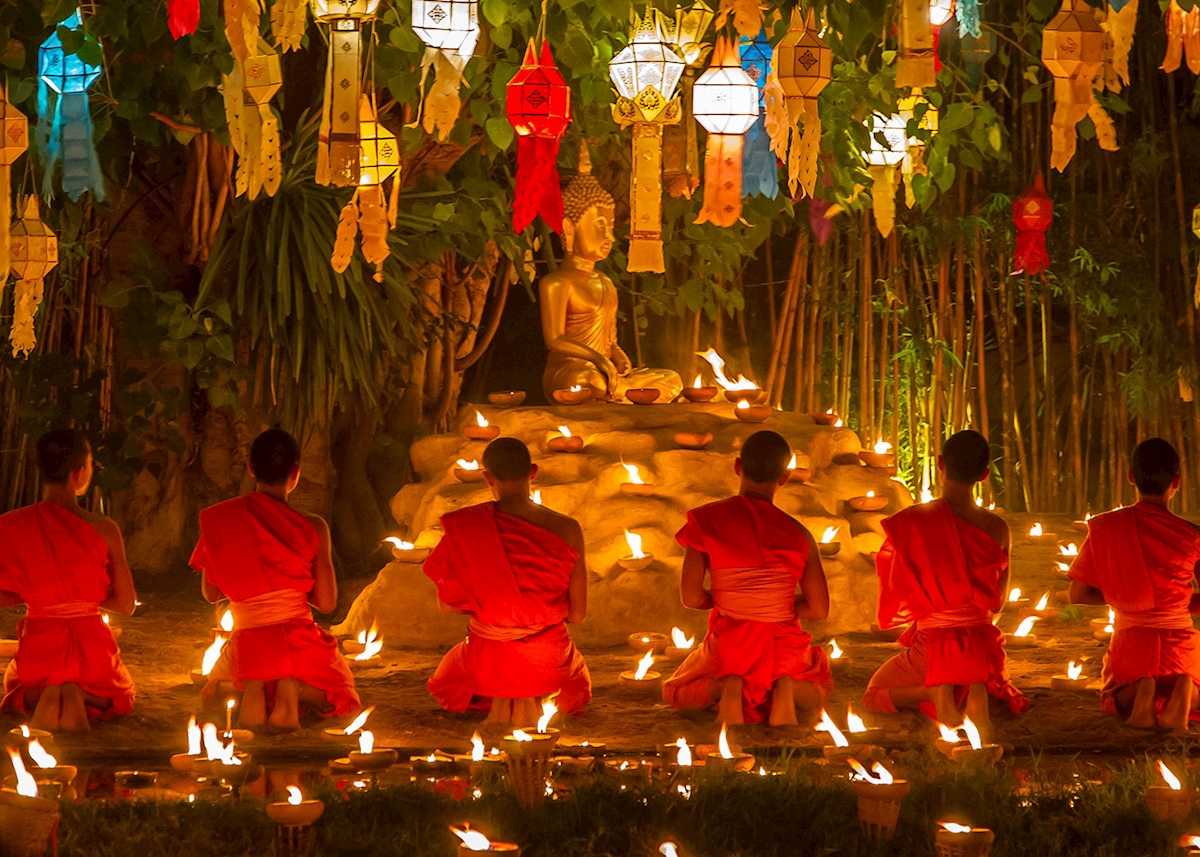 Loi Krathong is an annual festival celebrated in November, known as the twelfth lunar month. Floating offerings called krathongs made out of sliced banana trees or spider lily plants are elaborately decorated with folded banana leaves, incense sticks and candles. As the Krathongs are launched into the river, people make a wish, which is an ancient ritual to pay respect to the water spirits.

Visiting Chiang Mai during the Loi Krathong festival is a great way to see the city come to life. Some of the highlights include the hilltop temple Doi Suthep, excellent cookery schools and enchanting night markets.

'I travelled to Murun, northern Mongolia, and then spent two days driving across ice and snow to get to the outskirts of the Tsaatan camp. I wanted to catch an almost timeless shot and think I have achieved this. We normally see reindeer herders throughout the world tending to their animals but rarely riding them like the Tsaatan people do.

In fact they only eat the reindeer if they are old or sick. The day was bright so I didn’t have to worry about camera or shutter speed. The image is razor sharp, there is nothing worse than soft or out of focus shots. I love images with drama, and things like low light, snow, smoke, all add to this.' 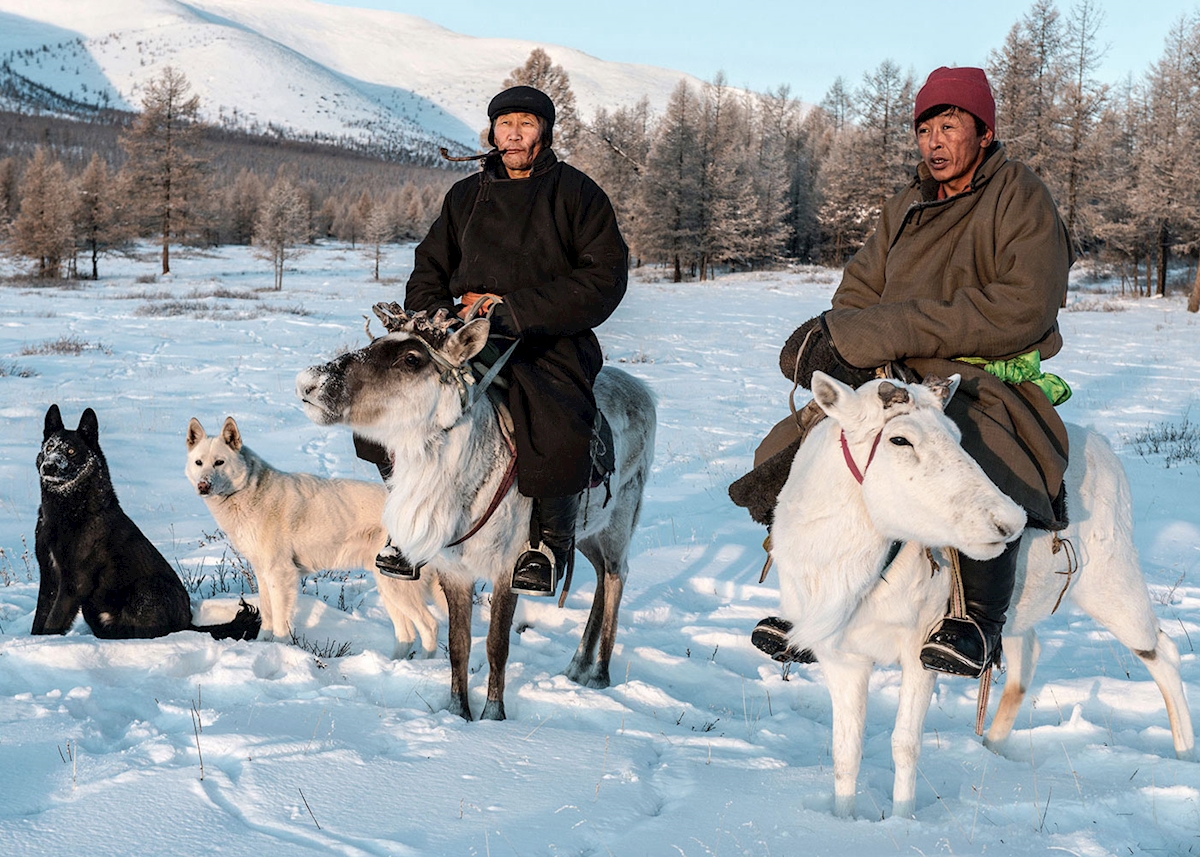 The reindeer people of Northern Mongolia

Exploring the vast wilderness of Mongolia makes for a totally unique experience that is far removed from everyday life. The high glacier-clad mountains discovered throughout expanses of rolling steppe provide an insight into how unchanged the landscape has remained through centuries.

Mongolia is sparsely populated but still home to nomads who have retained their traditional ways, proving to be warm and welcoming to any visitors on their travels. Given the severity of the winter months, the best way to travel is by train as part of a trip along the Trans-Siberian railway. We recommend travelling out to Terelj National Park to stay in a traditional ger (felt tent) where you can experience the peace and tranquillity of nomad life.

'We were spending a couple of days driving round Tuscany on our way down to Rome from Florence and this particular view was one I was very keen to see and photograph. Movie buffs might recognise it as the dirt road that Russell Crowe walked down towards his family in Ridley Scott’s film ‘Gladiator’. Unfortunately the fields weren’t full of the tall grass as seen in the film, but the moody looking sky more than made up for it.

I used a Nikon D800 with a Nikon 24-70mm lens to take the photograph, with the following settings: 1/160 seconds, f/6.3, ISO 250. It was then edited in Adobe Light room to bring out some details in clouds and increase the saturation and contrast a little. Should people visit the area, this is well worth seeking out for the views, as is visiting nearby Pienza which is a beautiful little town with a number of shops staffed by some very friendly locals'. 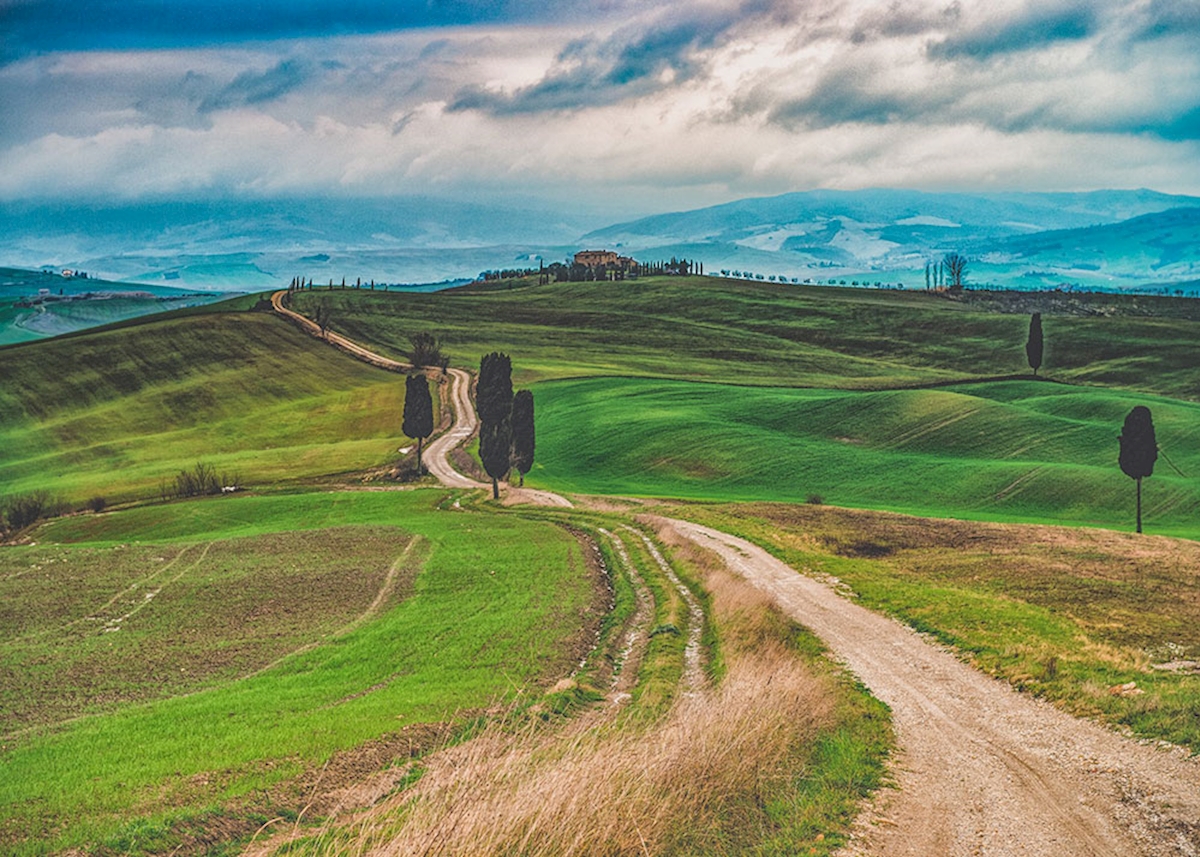 'The photograph was taken during a recent trip to Ayuthaya in December. We have visited the area many times, but this was the first time that we had decided to book a few nights’ stay so that we could be there during the evening, after the main hordes of day trippers had left. The first evening we visited the World Heritage Light and Sound Show which was amazing.

The second evening we booked a boat to visit temples on the central island around sunset, which was when this photograph was taken. The camera used was a Nikon D300s with Tokina 16-50mm f2.8 lens, the exposure settings 1/25 seconds at f2.8, ISO 640, and the camera was handheld. I shoot RAW and process the files using Nikon View NX2 and Paintshop Pro to get a sharp image.' 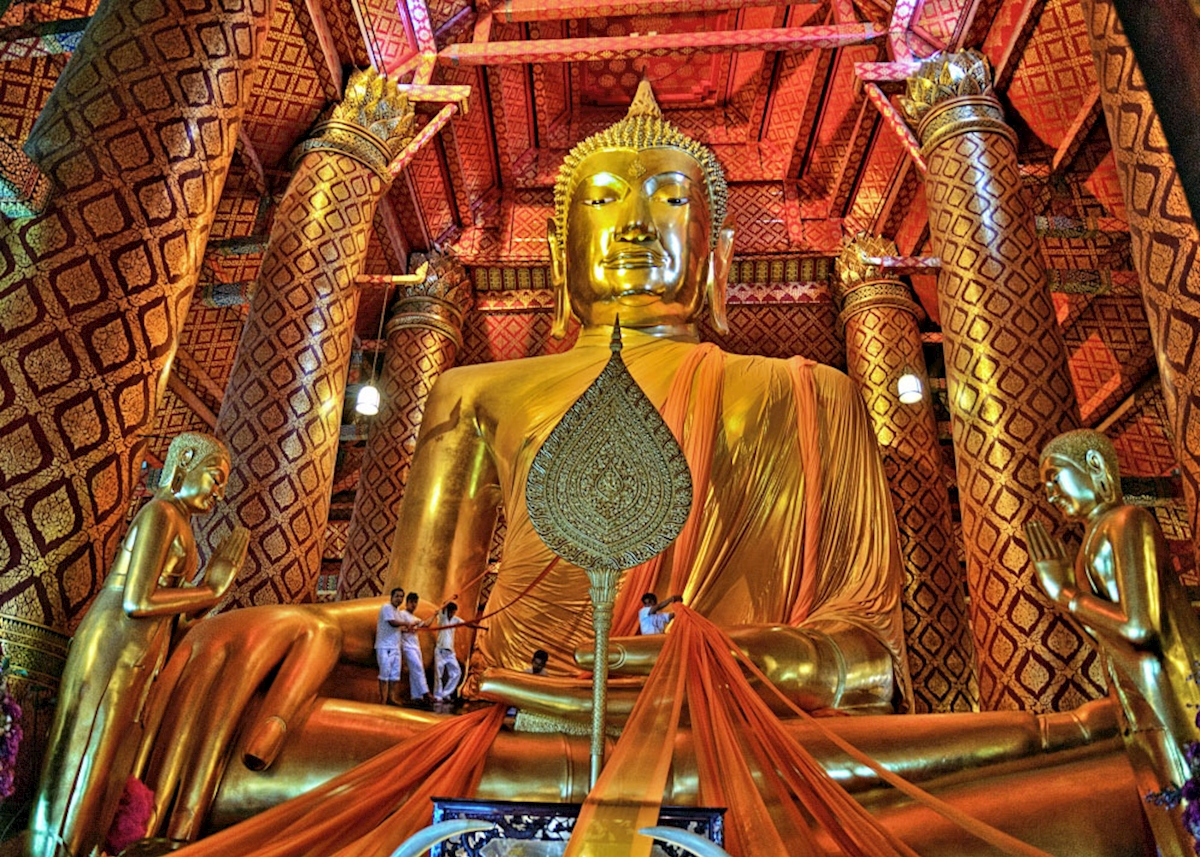 The abandoned temples of Ayuthaya are best explored in the soft evening or early morning light. This is when crowds are sparse and the former majesty of the ancient Siamese city is most apparent.

Ayuthaya’s oldest temple, Wat Phanan Choeng, can be accessed by car for a day trip or more atmospherically it can also be reached by boat as it sits on the confluence between the Chaophraya and Pasak rivers. We would recommend taking in the magnificent sights of Ayuthaya during a trip to Bangkok due to the temples' close proximity to the bustling centre.

'I was captivated by how Shenzhen transformed at night into a neon playground and wanted to capture the city’s nightly change. I was shooting the buildings in the background as a bus drove through the shot. My immediate disappointment was replaced with optimism when I examined the shot, realising that the bus added a unique perspective that portrayed the dynamic nature of the city.

I waited with my Canon 7D Mark II precariously balanced on a guard rail for buses to pass. I used the following settings to achieve the unexpected shot, f/6.3, 3.2 seconds and ISO 10. I lost track of time and only stopped shooting when the bus service had terminated. Ironically, I missed my bus and had to take a taxi.' 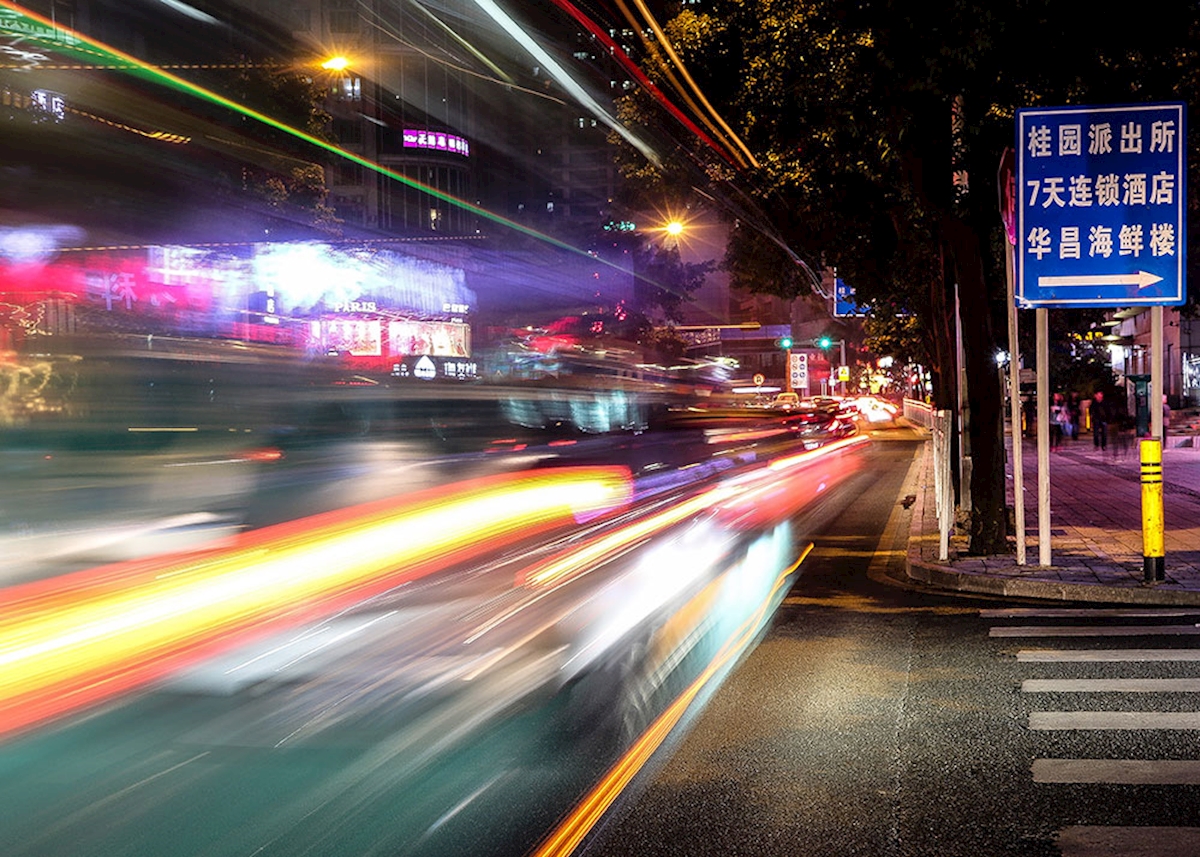 A short trip over the Shenzhen Bay Bridge allows you to discover the commercial and cultural hub of Hong Kong. The countless sightseeing possibilities in Hong Kong provide a unique blend of cultural influences. From the top of towering skyscrapers you can look out over the harbour beyond and get a feel for the multicultural modernity fused with ancient Chinese traditions.

Take a ride on the Peak Tram to the top of Victoria Peak for panoramic views of the city, then travel on to the fishing harbour at Aberdeen, home to the world’s largest floating restaurant. We recommend using Hong Kong as a base for either the beginning or end of your trip as it makes the ideal stop-over destination for further exploration into Asia or Australasia.

'I was travelling through both New Zealand's North and South Islands on an independent trip with my wife taking the opportunity to travel a bit whilst I was between jobs. Rotorua was one of our first stops, as I knew I might get some worthwhile photographs at Waiotapu.

We arrived early and had the place pretty much to ourselves at the time. As I wanted maximum sharpness throughout I set my camera to a small aperture and mounted the camera on my tripod focussing at the hyperfocal distance for the lens I was using. To ensure clarity and strong colours I had a polarising filter fitted on the lens.'

Rotorua lies at the heart of New Zealand’s geothermal activity and is a major focus for Maori culture. With an abundance of steamy mineral lakes, bursting geysers and bubbling mud pools, you can soak up the peace and tranquillity by bathing in one of the many hot springs. Just 27 kilometres south of Rotorua is the geothermal area of Waiotapu, an area known for its brightly-coloured hot springs.

People have been bathing in these waters for centuries due to the belief that the minerals provide health benefits. We recommend exploring Waiotapu as part of a tour of the Western North Island taking in the town of Waitomo between Auckland and Rotorua, as well as the multitude of scenic national parks, including Whanganui and Egmont.