Auckland is New Zealand at its most metropolitan: over a third of the population live here. Glittering modern glass towers cluster its waterfront and line its streets, but you don’t have to wander far before something more quintessentially New Zealand begins to make itself felt.

The city is overlooked by gang of extinct volcanoes, some of which are touchpoints for Maori culture and identity. Native ferns and flora mingle with European newcomers in green spaces and parks. And, farther afield lie islands of unspoiled bush and the semi-tropical beaches of Northland. 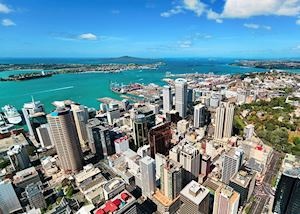 Central Auckland has all the ingredients of a busy, forward-looking city. In the CBD (central business district), big-name stores and entertainment venues line Queen Street (often referred to as the ‘Golden Mile’). Markets beloved of food-enthusiast locals are scattered liberally about, crammed with fresh produce. A few sterner-looking Edwardian- and Victorian-era administrative buildings sit alongside the shiny skyscrapers. The spindly Sky Tower, with its revolving restaurant and observation decks, watches over it all.

Seafaring is central to Auckland: a short walk from Queen Street you can meander on boardwalks lining the waterfront district. From Waitematā Harbour, Viaduct Harbour and Hobson West Marina, you look out over a forest of masts: of all the world’s watery cites, Auckland allegedly has the highest number of pleasure craft per capita. It’s also here, on the waterfront, that you’ll find some of the city’s best bars and restaurants, many with views of the sparkling waters.

Auckland’s nickname (‘City of Sails’) also reflects its past success as both host of and competitor in the America’s Cup. You can have a go at crewing one of the fastest full racing yachts, the NZL40, in an America’s Cup sailing experience in Waitematā Harbour. (You’re also free to sit back and enjoy the ride).

The city’s Maori heritage is less visible, but deeply felt. The best way to get an understanding of it is through a guided tour with a Maori resident. Tours visit One Tree Hill, a volcanic cone now smothered under a grassy hilltop, and once the site of a Maori pa (fortified village). Spoiler alert: there’s no tree. The obelisk monument that stands in the tree’s place has a controversial history, which Maori guides will relate. 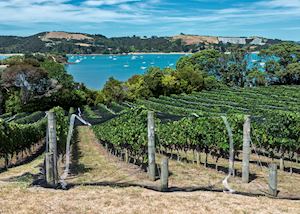 Waiheke Island is a bit like an offshore garden to Aucklanders, who come here to summer on its beaches and saunter around its boutique vineyards. You can experience its viticulture on a Waiheke Island wine tour. Meanwhile, the shield volcano of Rangitoto Island can be glimpsed from around Auckland. You can hike to its summit through native pohutukawa forest, and both islands can be reached via ferry.

Farther afield lie the semi-tropical beaches of Northland, which make for either a restful opening or finale to a New Zealand trip. There are good beaches close to Auckland (which New Zealand specialist James details in his guide to campervanning in New Zealand). Farther north, you come to the secluded waterworld of the Bay of Islands with its boat tours and diving opportunities.

Auckland is at its best weather-wise between October and May. Our preferred month to experience it is November, when the city is warm yet washed with cooling breezes.

Our itineraries will give you suggestions for what is possible when you travel in Auckland, and they showcase routes we know work particularly well. Treat them as inspiration, because your trip will be created uniquely by one of our specialists.

We’ve selected a range of accommodation options for when you visit Auckland. Our choices usually come recommended for their character, facilities and service or location. Our specialists always aim to suggest properties that match your preferences.

Our specialists seek out authentic ways to get to know the places that could feature in your trip. These activities reflect some of the experiences they've most enjoyed while visiting Auckland, and which use the best local guides. 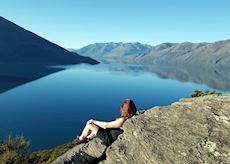 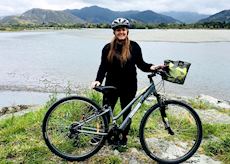