Opposed to the bright lights, fast pace and noise of some Asian megacities, Bangkok’s more relaxed tone, easily navigable public transport and keen-to-please residents make a gentler introduction into Southeast Asian life. Originally marking the map as a key trading post of the 15th-century Ayutthaya Kingdom, Bangkok is still very much a commercial hub. You can flit between world-class boutiques and local markets before browsing the stalls that line the streets. Spiking up between the malls and tower blocks are the gilded chedi (bell-shaped relic chambers) of the Buddhist temples and wats that provide places of solace throughout the city.

No matter how many times I visit Bangkok, there’s always something new to discover whether it’s finding a hidden temple down a side street or happening upon a new street-food delicacy.

Things to see and do in Bangkok

Get an introduction to Thai food

As your likely first stop in Thailand, Bangkok is an ideal place to get acquainted with Thai food and gain the confidence to experiment throughout the rest of your trip. On a street food tour a local guide will take you to Bang Rak, one of Bangkok’s busiest districts. Diving first into a busy market, you’ll be able to smell some of the local spices and take a look at some of the exotically shaped fruits.

A Bangkok resident, your guide will take you to chosen haunts, ranging from street-side stalls to unassuming local restaurants, to sample local food highlights. Crispy prachak pet yang (roast duck) is a local speciality: stallholders keep their perfected recipes a closely guarded secret. Jao long luk (fishball noodles) are made fresh each morning from locally caught halibut. Dessert is likely to be fresh mango and sticky rice, available on almost every corner. 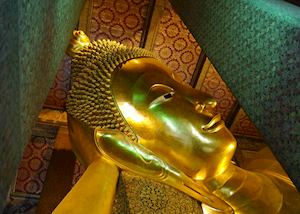 A city split into 50 districts, intersected by the Chao Phraya River, Bangkok is too vast to explore simply by foot. Accompanied by a local guide, you can cross the city using a range of public transport, taking in some of the key sites along the way. Starting off on the Skytrain helps you get your bearings and provides views across the city.

You’ll also join local transport users on a public taxi boat to visit the royal temple Wat Pho, which houses the Reclining Buddha and the ashes of King Rama I. A short walk away is the gilded Grand Palace, a conglomeration of temples, courtyards and gardens. By means of a tuk-tuk you dive into the backstreets to reach Soi Ban Batra, an enclave for artisans who handcraft alms bowls, used by monks to beg for donations.

Cruise through Bangkok’s hidden klongs on a private tour

Central Bangkok is a blur of motorbikes, tuk-tuks and taxis darting between the high-rise flats and offices. Across the west side of the river you’ll find a different pace of life. Stepping into a private longtail boat, you’ll sail through an intricate network of canals, known locally as klongs. Once known as the ‘Venice of the East’ by European traders, these waterways were the main means of transporting goods across the city.

The klongs are still very much in use, and you’ll pass heavily laden barges carrying fresh produce and building materials up and down the river. When Bangkok was a small trading town, its inhabitants built their houses on stilts attached to the banks of the klongs, some of which still stand. Cruising along the Klong Luang Canal, you see how it was cut around the 16th-century Wat Arun, a royal temple containing thousands of Buddha statues donated by pilgrims.

Flying into Bangkok, as you look down on the city you’ll see a lung-shaped patch of jungle formed by an oxbow in the Chao Phraya River. This is Bang Kra Jao, known by local inhabitants as Bangkok’s ‘green lung’. An oasis of mangroves, forest and waterways, it’s a stark contrast to the surrounding chequerboard of residential and financial districts. Hop on a local ferry from central Bangkok and you can explore the maze of boardwalks and riverside paths on a bicycle tour with a local guide.

Bang Kra Jao was originally settled by Mon refugees, a Burmese ethnic group fleeing persecution in the early 19th century. Their descendants still live here in stilted houses set among the mangroves: a local planning law protects any further building. As you cycle past banana and coconut trees, it’s worth stopping at one of the local temples. Crafted in miniature compared with their inner-city counterparts, they’re still flawlessly painted and topped with an intricately gilded pagoda.

From her Bangkok kitchen, Angsana Anderson teaches Thai cookery using recipes from her family cookbook, which is added to by each generation. Joining Angsana for a morning, you can enjoy some home-cooked Thai food and see how dishes are created in homes across the country, as well as learning some new skills.

First visiting the market, you help to choose ingredients for your dishes. Under Angsana’s guidance, you then make a selection of main courses and sweet dishes (do mention if you have a particular dish in mind). You’ll pick up how to make a curry paste as well as the uses for unusual ingredients such as banana flowers and pomelos. Angsana’s wun maprao (coconut jelly made in a coconut shell) is an attractive-looking finale. 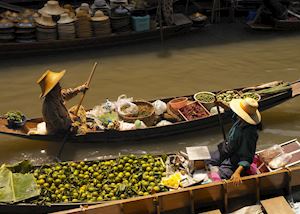 Drive through Bangkok’s residential suburbs and industrial outskirts and you’ll quickly arrive in rural Thailand. With the help of a car and local driver, you can dip into Thailand’s more provincial way of life by visiting local markets and villages. After driving past fisheries and coconut plantations, you reach the Maeklong Railway Market, where fruit and vegetable stalls are neatly lined up alongside the train track. Every time a train approaches, vendors whip their stalls back to make way for the train before deftly moving them back into position.

Relaxing the pace, you can board a row boat to peruse the produce on offer at Tha Kha Floating Market. Locals paddle their longboats, piled high with fruits and vegetables, along the banks of the river. Some boats are fitted with tiny stoves to cook fresh omelettes or noodles and, further down the river, you’ll find quieter pockets of traders selling straw bowls of grain and rice.

Experience Bangkok at night with a local resident

As darkness falls, Bangkok’s skyline lights up with neon signs, starkly lit night markets and exclusive hotel bars. Navigate the city with one of its inhabitants and you can discover some of its nocturnal highlights.

The evening begins in the Park Society Bar to watch the sunset from the outdoor mezzanine overlooking the city. From here it’s a short tuk-tuk ride to the business quarter of Silom.

In Silom, you immediately smell roast duck and wafts of lime and chilli. Local vendors cook busily at their street-side stalls, preparing dishes of pad Thai and bowls of ba mee moo daeng (noodles with barbecued pork) to appease the awaiting crowds. The nearby BTS Skytrain takes you to the Chao Phraya River to board a boat to finish the evening at the busy night market Asiatique.

It’s possible to visit Bangkok year round. There are three key seasons: December to March is cool with clear skies; April is hot and humid; May to November is the rainy season. December to March is the busiest time to travel, as the average temperature of 27°C (80°F) is at a comfortable level to explore the city. Don’t be put off from visiting in rainy season as showers are often brief and hotel prices are good value.

Our itineraries will give you suggestions for what is possible when you travel in Bangkok, and they showcase routes we know work particularly well. Treat them as inspiration, because your trip will be created uniquely by one of our specialists.

Our expert guides to exploring Bangkok

Written by our specialists from their own experiences of visiting Bangkok, these guides will help you make the most of your time there. We share both our practical recommendations and the best ways to appreciate Bangkok at its best.

We’ve selected a range of accommodation options for when you visit Bangkok. Our choices usually come recommended for their character, facilities and service or location. Our specialists always aim to suggest properties that match your preferences.

Our specialists seek out authentic ways to get to know the places that could feature in your trip. These activities reflect some of the experiences they've most enjoyed while visiting Bangkok, and which use the best local guides.