Since the publication of Pierre Boulle’s 1952 novel, The Bridge on the River Kwai, the riverside city of Kanchanaburi has become synonymous with the prefabricated metal bridge that spans the Kwai’s turquoise waters. The book highlights the city’s position on the ‘Death Railway,’ a rail route from Thailand to Myanmar, orchestrated by Japanese forces using Allied prisoners of war (POWs) and Asian labourers. 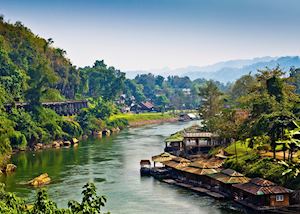 The deadliest part of the 415 km (258 mile) railway was the Konyu Cutting, a 600 m (1,968 ft) section of almost impenetrable rock which was hand-chiselled by hundreds of POWs working 18-hour shifts.