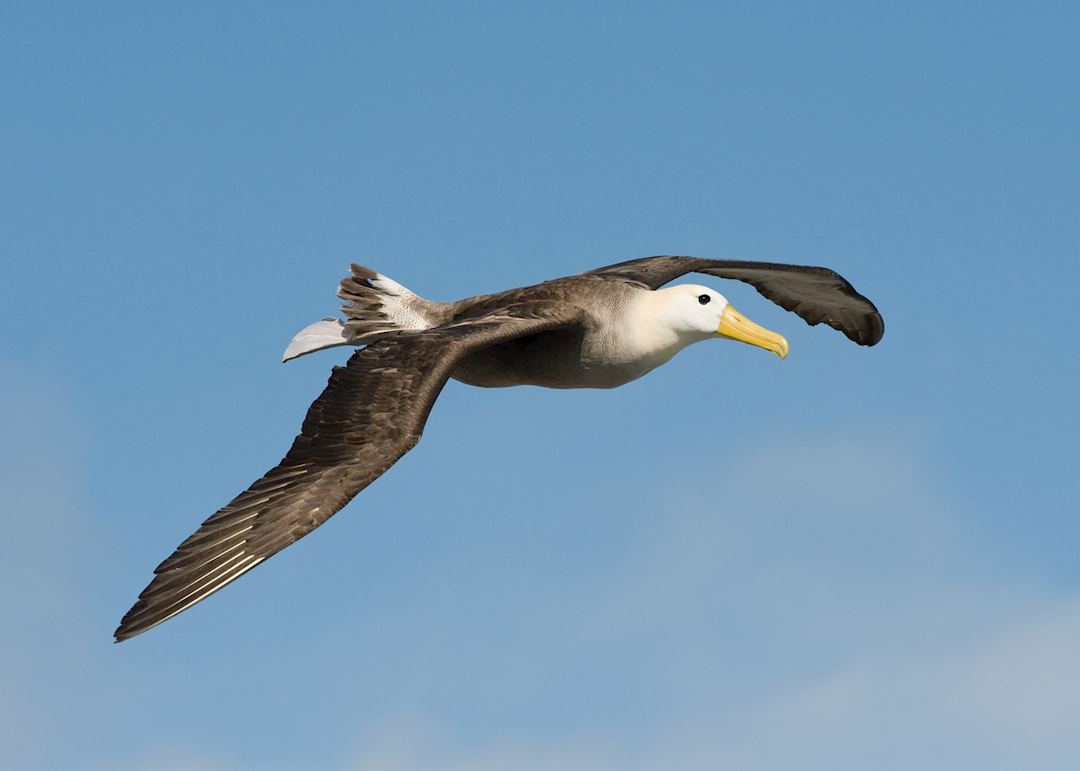 A to Z of the Galapagos

A trip to the Galapagos Islands is a once in a lifetime experience. Their incredible biodiversity, arresting scenery, remote location and historic importance make them an inspiring and highly memorable destination.

Although most famous for their seemingly fearless wildlife, the islands have much more to offer the visitor. Here our experts, who have all travelled extensively throughout the archipelago, present an A-Z round-up of all (well as many as space permits) things Galapagian.

Española Island is home to the only albatross found in the world’s tropics. Between April and November these graceful birds display spectacular courting rituals that you can observe from close quarters.

The Galapagos Islands are home to three species of booby: the blue-footed with their comical mating dances, the Nazca with their easily identifiable white heads and dark eye masks and the rarer red-footed, the only one of its species to nest in trees and which can only be seen on Genovesa and San Cristóbal Islands. Plus, somewhat inevitably, there is the opportunity to purchase “I love boobies” t-shirts at the Galapagos gift shops.

In the 1880s San Cristóbal Island was home to a rather brutal penal colony run by the Ecuadorian Government who had claimed sovereignty of the islands in 1832. Prior to that, the human history of the Galapagos was a heady mix of a possible Inca visit in the 1500s, a rather underwhelmed bishop of Panama making the official discovery (by accident) in 1535, and centuries of pirate activity and hunting, for whales and tortoises in particular.

The underwater diversity of the islands is as celebrated as that on terra firma and for the dedicated diver (strong currents make the waters off limits for the inexperienced) the rewards are great. The waters surrounding the far northwest islands of Darwin and Wolf are renowned for their schools of giant manta rays as well as Galapagos, hammerhead and whale sharks.

If you choose to cruise around the islands you can expect to get off the boat twice a day to either explore on land or go snorkelling. If you are staying in a hotel or lodge the same applies but you will obviously not be able to get quite as far afield over the course of your stay.

The 13 different endemic species of finch found in the Galapagos are similar in size but have different types of beaks. This was an attribute noticed by Charles Darwin when sailing in the Galapagos on the HMS Beagle in 1835. As he studied the birds he realised the beaks had adapted to suit the different food sources available on the islands on which they lived. This became a crucial part of his thoughts on natural selection and theory of species evolution.

You may be concerned that the Galapagos is full of large tour groups. In fact the National Park rules dictate that there must be a guide for every 16 passengers so group sizes are kept small and large cruise liners are not allowed to operate around the islands.

An excellent alternative or accompaniment to the conventional cruises operating around the islands, hotels
and lodges can be used as a base for exploration to nearby islands, snorkelling, scuba diving or simply relaxing. They are also ideal for those who are concerned that their sea legs may not be up to a cruise, although the waters here are generally pretty calm.

The largest of the islands of the Galapagos, sea-horse shaped Isabela is made up of a string of five volcanoes and is home to many of the archipelago’s iconic species including giant tortoises, flightless cormorants, penguins and marine iguanas. The small town of Puerto Villamil is a great place for an alternative, off-the-beaten-track stay.

Goats were introduced to Santiago Island in the 1920s and quickly started to cause erosion, threatening the survival of rare plants, trees and animals. After culling failed to eradicate them, in 2004 ‘Judas goats’ (goats captured from other islands and fitted with radio collars) were put on Santiago to lead hunters to the remaining goats, as were ‘Mata Hari’ goats who were given oestrogen to lure out the remaining males. Santiago has now been goat free since 2005.

All of our Galapagos specialists have visited the islands at least once (it’s a tough job!). During this time they have personally inspected the boats and hotels we use, met many of the guides and taken a cruise to fully understand how a typical trip unfolds so they can explain it to you, our Audley travellers.

Arguably the most famous resident of the Galapagos, George is the last known surviving giant tortoise from Pinta Island. Today he is seen in captivity on Santa Cruz Island where experts are attempting to find him a partner and potentially save his species.

Indigenous to the islands, these mesmerising little creatures can be found in large groups warming themselves on the rocks. Living on a land forged by fire, their black and red leathery skin blends perfectly with their rocky surroundings. You will find them spitting salt out of their noses after diving down into the sea in order to forage for algae. They are, in fact, the only species of lizard capable of swimming and they look truly majestic when doing so – kicking their tails and wiggling their bodies in such an elegant and streamline fashion you would barely recognise them as the same creature that laboriously clambers across the volcanic rocks of the Galapagos. Just be careful not to step on them, you’re in their world and they won’t budge for you.

Having generally had no human predators throughout their evolution, much of the wildlife in the Galapagos shows no fear towards us, allowing for a very close experience with nature.

One of the smallest species in the world and the only one found wild in the northern hemisphere (the Galapagos cross the equator), Galapagos penguins are relatively common around the central and northwestern islands.

You’ll probably have loads of questions and our Galapagos brochure answers many of the most commonly asked – please ask us for a copy. Our specialists will be able to answer many more!

The fragility of the delicate Galapagos ecosystem is well documented and it is only right to consider your impact before travelling. We ensure that the hotels and boats we use are ‘Smart Voyager’ certified or are working to a similar accreditation. This programme ensures that operators in the archipelago meet the strictest conservation standards.

The unmistakable bright red Sally Lightfoot crabs, supposedly named after a Caribbean dancer famous for her red dresses, can be observed everywhere around the Galapagos shorelines and rocky outcrops. They scavenge on anything they can get their claws into.

Often overshadowed by the popularity of their land-based cousins, Pacific green turtles are commonly seen during snorkelling excursions.

Often bandied about to describe interesting travel experiences, this overused word was practically invented for the Galapagos. If anywhere deserves the description, it is here.

The Galapagos Islands erupted out of the Pacific ‘Ring of Fire’ about four million years ago and today the islands’ volcanoes are still active. Recent travellers on boats have witnessed spectacular night-time lava shows which have left impressive lava fields on a number of islands.

The Bolivar Channel separating Isabela and Fernandina islands becomes a haven for orca, sperm, pilot, minke and blue whales between June and September when the Humboldt Current encourages a rich marine ecosystem in the area.

Preserving the pristine environment of the Galapagos archipelago is an ongoing challenge. Expect all your luggage to be x-rayed before flying to the islands to prevent any unwanted organisms potentially entering the ecosystem.

The most common way to explore the archipelago is on board an expedition yacht (with or without sails). Sailing between islands, venturing on shore to view the wildlife and snorkelling or relaxing on a beach are just some of the activities available whilst travelling around these iconic islands.

An afternoon siesta is an integral part of any day in the Galapagos, induced by the early mornings, fresh air, hearty food and new experiences. 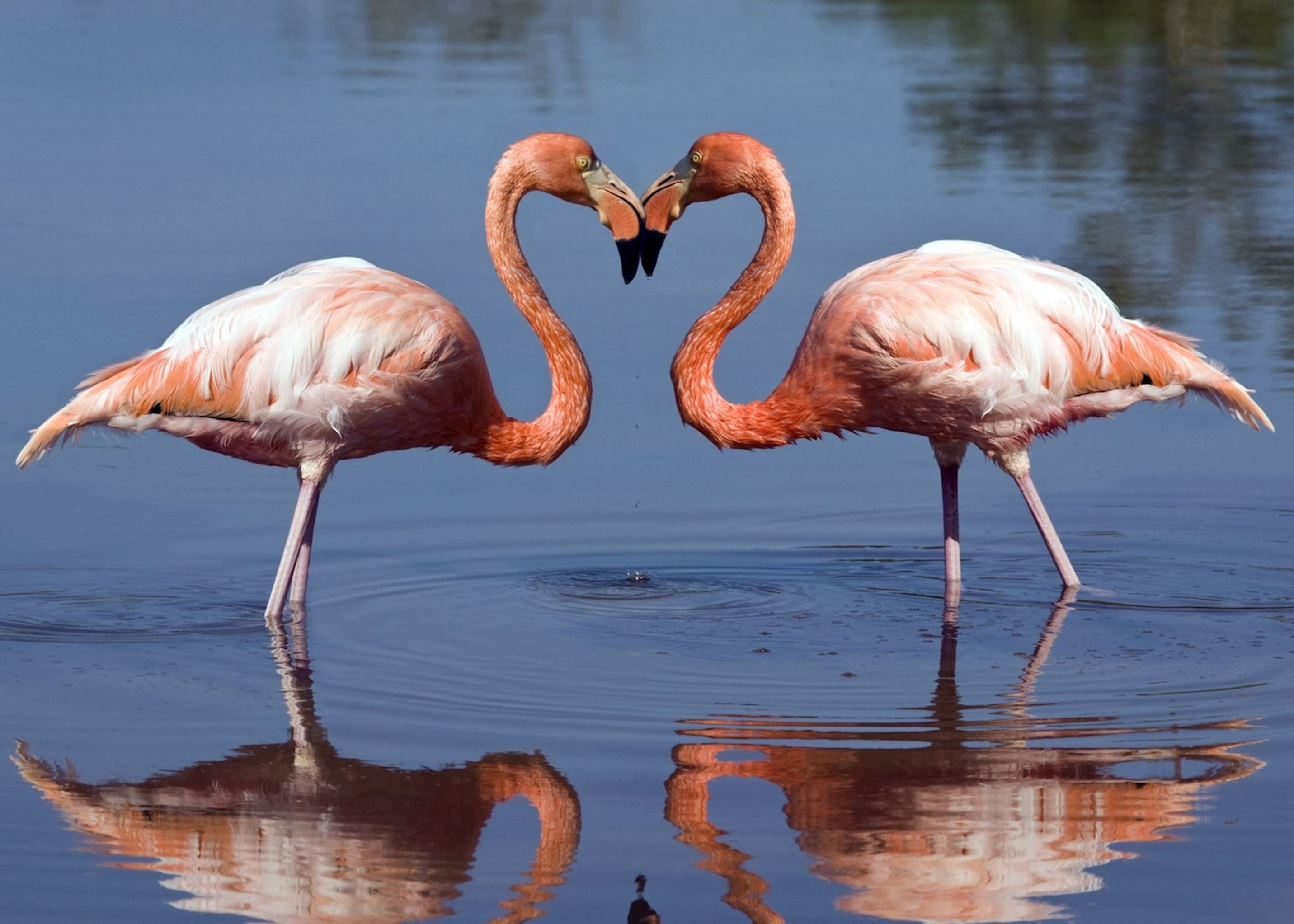 Tailor made vacations in the Galapagos

To find out more about tailor-made vacations to the Galapagos with Audley, visit the Galapagos section of our website or speak to a South America specialist directly on 1-855-234-2083. View our Galapagos vacations